Brookhaven's PubSci Starts Off With a Big Bang

“Here’s to the eternal uselessness of the electron!” said Paul Sorensen, raising his beer in a toast. The crowd laughed at the recounting of a historical moment, in which British physicist J.J. Thomson, the discoverer of the electron, famously misjudged how his work would impact the world. Like a boulder tossed into a still pond, the effect of the 1898 discovery created ripples throughout nearly every facet of life in the following century —including carrying the current that brings these words to your eyes.

And so, with this nod to pure curiosity, to scientific exploration for the sake of knowledge, and to the unknowable impacts of discovery, Brookhaven National Laboratory’s first “PubSci” began—the inaugural event in a series of informal chats between scientists conducting research at our world-class laboratory and curious people from nearby neighborhoods.

On the evening of March 11, 2014, a crowd packed the Hoptron Brewtique in Patchogue, NY, to learn a bit about the beginnings of the universe, the research at Brookhaven’s Relativistic Heavy Ion Collider (RHIC) that recreates the post-Big Bang primordial soup, and the future of scientific exploration on Long Island. 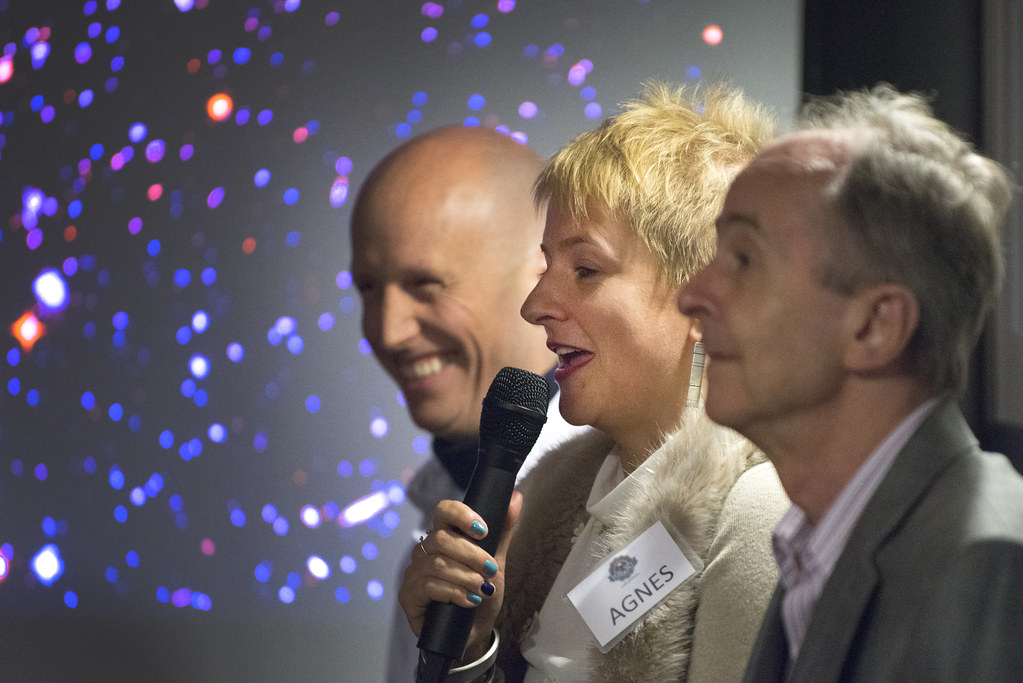 The crowd came ready to ask questions of the panel of physicists, who all contribute to the research at RHIC: Berndt Mueller, Brookhaven’s Associate Laboratory Director for Nuclear & Particle Physics, leads a collaboration of hundreds of scientists in the pursuit of understanding the moments just after the birth of our universe; Paul Sorensen, a Brookhaven physicist, works on the STAR detector at RHIC, which was instrumental in discovering the hot quark-gluon plasma that made up the early universe; and Ágnes Mócsy, a theoretical physicist at RHIC and an associate professor of physics and astronomy at Pratt Institute.

Andrew Howe, a Sayville resident, says he had been looking forward to chatting with scientists at the pub since he heard about it weeks ago. “I have an intellectual curiosity, so almost any topic interests me, especially when you’re getting it from a world class source,” he said. “It’s a cool thing that you brought this amazing science out of the borders of the Lab to us.”

“It was great to hear the scientists talk about themselves and joke around and just be casual. I also really liked hearing about the future of the research at RHIC, and the new electron collider they want to add,” Howe said, referring to a proposed upgrade of RHIC to add an electron accelerator so scientists can explore details of the force that binds subatomic particles to make up the ordinary matter of today's world.

It was a lively evening, full of cheering and laughter, as Brookhaven’s physicists shared not only their science, but also their own perspectives on the grand questions they ask in their work every day.

“It was an awesome experience to engage with so many interested people in such a public, yet intimate setting,” Mueller said. ”The many questions we received really helped us convey the excitement of the science and explain the results of our research at RHIC.”

Though the topics were weighty, the mood was light and cheerful. The mention of Einstein’s famous E=mc2 solicited whooping and hollering, and the physicists played along, sharing the funny and heart-warming moments that come with a career in science.

“I most certainly enjoyed myself,” said Mócsy. “I absolutely loved talking about our science in plain language, without the math and with only simple props. What really made the event a success were the curious people who came to the bar on a weeknight. For me it was really energizing to see the packed room hungry for learning about big science while thirsty for good beer. I really love to talk about the mind-blowing research and discoveries that we make right here in New York, and I’d hope more and more people would come to chat with us and more and more people would realize that physics is not out of reach. It’s accessible if we make it accessible.”

Tara Shiels, who organized PubSci from Brookhaven National Laboratory’s Stakeholder Relations Office, counted the event a success as well. “PubSci was a great opportunity to share our science with the community and enjoy a pint with our neighbors. It was great to see so many people excited to talk with Brookhaven scientists. We’re looking forward to the next PubSci!”

The informal atmosphere lent itself to an entertaining evening, including a raffle for PubSci pint glasses and a question and answer round with the scientists that lasted well over an hour.

“I had a lot of fun,” Sorensen said. “I really appreciate the audience coming out to hear what we have to say. It's very important to me that the public has as much fun with the science as we do. This whole scientific endeavor is about all of us. It's about pushing the boundaries of human knowledge and I feel like we were able to do that for folks in the crowd. I hope they felt as inspired as I felt by the end of the night.”