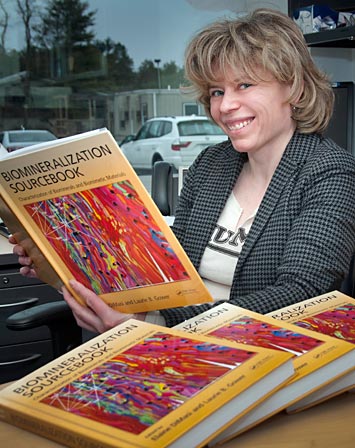 Elaine DiMasi beams over the Biomineralization Sourcebook she has been working on for 2 years. "It's exciting to finally hold it in my hands," she said. "It was an enormous project, but I survived it. And we're really proud of how it turned and the quality of the writing and the book as a whole."

Elaine DiMasi has made a name for herself as an innovator in the study of biological materials. She has managed beamlines X22B and X6B at the National Synchrotron Light Source (NSLS) for 12 years, and now leads the beamline development group for the Soft Matter Interfaces beamline at the National Synchrotron Light Source II (NSLS-II). This beamline, which will see first light in 2017, will enable scientists to probe the structures of liquid crystals, molecular electronics and photo-responsive organic films, which will play crucial roles in advanced technologies.

DiMasi uses x-rays at NSLS to reveal the subtle changes in molecular architecture that occur during the process of mineralization in cell and protein systems, such as the formation of bones, egg shells, teeth, coral or exoskeletons. But for the past two years, she hasn’t been doing as much experimentation as usual. Instead, she’s been focusing on co-editing the Biomineralization Sourcebook, a how-to manual for synchrotron scientists interested in characterizing organic materials, as well as biomimetic materials that imitate natural processes.

“My collaborator, Laurie Gower, is one of the key people who allowed me to enter the field of biomineralization. I had been doing other things, and I started going to conferences and realizing this work could be done on synchrotrons. And she agreed to do an experiment with me, so we started working together,” DiMasi said.

"When we share techniques, the science gets better. When we help each other, we can make our discoveries bigger."

They published a few papers that became well-known for the unorthodox techniques they used to examine minerals at liquid surfaces. And as DiMasi continued in the field, she found herself interested in the various techniques that could be applied in new ways. When Gower was approached by Taylor & Francis Group publishers about editing a book on biomineralization, she reached out to DiMasi and they teamed up to create this new scientific reference.

“We wanted to do something different than the other books on the market, to tell the stories of different materials science techniques used at synchrotron beamlines, and even tell readers how to do them,” DiMasi said. “When we contacted scientists to see if they’d be willing to be authors, they shared the special tricks they had up their sleeves, and that got people interested in telling a different kind of story.”

These tricks of the trade may not fit in scientific papers, but they are valuable lessons learned from years of work at synchrotron beamlines around the world. “When we share techniques, the science gets better. When we help each other, we can make our discoveries bigger,” DiMasi said.

The book covers the many techniques for characterizing biological minerals: diffraction and scattering, spectroscopy in all wavelengths of light, atomic force microscopy, and x-ray tomography. DiMasi and Gower recruited more than 40 authors to share their wisdom, give case studies of the ways each technique is used, and provide historical context for their scientific pursuits.

A chapter on digital optical metrology discusses cutting-edge measurement systems while referencing the famous series of images of a horse running, taken with multiple cameras by Eadweard Muybridge in 1876. Another section covers advances in microscopes by discussing just how far scientists have come since the days of drawing specimens.

“In the old days, a scientist would look at hundreds of specimens and draw an ideal version. Now, we can take a picture with such good focus that we can see all the imperfections, all the individual differences between each organism,” said DiMasi. “These techniques not only advance our understanding about one specimen, but it changes the field of biomineralization.”

The book is written for scientists who may already work in biomineralization, but who are curious about other aspects of the field.

“Our science is very multidisciplinary now, so to push the field forward, you have to be able to incorporate a lot of techniques into your work. And we wanted to create a reference book for those, so if you’re doing scattering and you want to learn about tomography, you can grab this off your shelf and maybe learn how to do it, find a collaborator, or figure out what user facility you can use.”

Many of the chapters even include descriptions of the available beamlines at synchrotrons around the world, including NSLS, where interested users can apply the techniques described. DiMasi authored two chapters that bookend the volume and give a perspective looking forward to the upcoming beamline she will oversee at NSLS-II.

“I had a lot of respect for the authors I had recruited, and I know how hard they all worked because I wrote a chapter, too. It was an enormous project, but we survived it, and we’re really proud of how it turned out—the quality of the writing and the book as a whole.”

DiMasi and Gower envision future volumes in the series that could cover chemical synthesis for biomineralization models and biological techniques.

Biomineralization Sourcebook: Characterization of Biominerals and Biomimetic Materials is available from CRC Press.