Brookhaven Science Associates (BSA), the company that manages Brookhaven Lab for the U.S. Department of Energy through a partnership between Battelle and Stony Brook University, has announced 15 winners of the annual BSA Scholarships. These scholarships are awarded to children of Lab employees—a longstanding tradition that began at Brookhaven Lab in 1965.

Each BSA scholar is a high school senior who will receive $2,500 per year for up to four years of study at the college or university of his or her choice. In addition, BSA scholars who are admitted and enroll as fulltime students at Stony Brook University in the fall of 2014 will receive a matching scholarship from Stony Brook, according to President Samuel L. Stanley Jr., M.D.

"On behalf of Brookhaven Science Associates, I congratulate our new BSA Scholars," said President Stanley, who also chairs the BSA Board of Directors. “These 15 exceptional students are on the path to success as they prepare for new opportunities by pursuing higher education, and we are proud to be a part of their journey." 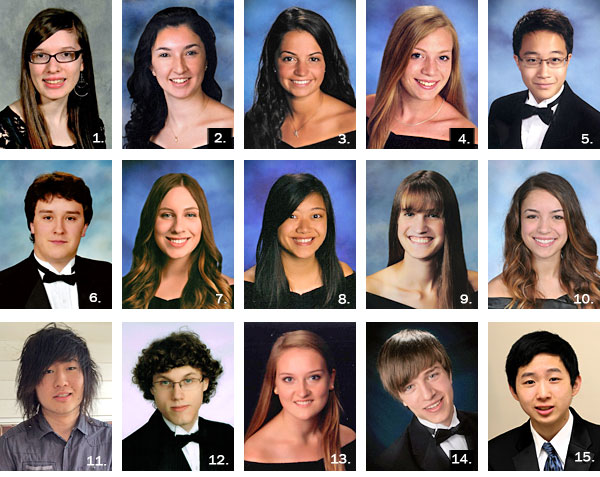 1. Jenna Ferrara, who lives in Miller Place and soon will graduate from Miller Place High School, is the daughter of Peter Ferrara of the Fiscal Services Division. She will attend Misericordia University to prepare for a career in occupational therapy.

2. Allison Fox, daughter of Jane O'Brien-Fox of the Fiscal Services Division and Andrew Fox of Facilities & Operations, lives in Calverton and is a senior at Riverhead High School. She will major in English at the State University of New York at Geneseo.

3. Olivia Gassner attends Bellport High School, lives in East Patchogue, and is the daughter of David Gassner in the Collider-Accelerator Department. She plans to study mathematics at the University of Miami and is interested in a career in actuarial science or education.

4. Caroline Grove, a senior at Smithtown High School West and resident of Smithtown, is the daughter of Edward Grove in the Quality Management Office. She will go to the University of Delaware.

5. Eric Hu, who lives in Setauket and goes to Ward Melville High School, is the son of Eugene Hu in the Photon Sciences Directorate. He will attend New York University for string performance and is also interested in studying culture, education, and human development.

6. Mackinley Jensen, son of Michael Jensen in the Environmental and Climate Sciences Department, is a resident of Centerport and senior at Harborfields High School. He will attend Pennsylvania State University to major in music education.

7. Elana Laster, who lives in Old Bethpage and attends Plainview-Old Bethpage John F. Kennedy High School, is the daughter of Mildred Wiener and Jonathan Laster in the Collider-Accelerator Department. She will attend the University of Maryland to major in biology for a career in medicine.

8. Millie Ma of Port Jefferson Station attends Comsewogue High School and is the daughter of Hong Ma in the Physics Department. She will study biochemistry at Emory University and is interested in medical research.

9. Katherine Michta, a senior at Sachem High School North and resident of Nesconset, is the daughter of Richard Michta, who works in the Photon Sciences Directorate. She will attend Molloy College to major in nursing.

10. Ariana Nunez, who is the daughter of Ariel Nunez in the Facilities & Operations Directorate, lives in Oakdale and attends Connetquot High School. She will attend Adelphi University to prepare for a career as a nurse practitioner.

11. Hiiragi Okamura of Sound Beach attends Rocky Point High School and is the son of Masahiro Okamura in the Collider-Accelerator Department. He will major in engineering physics at the University at Buffalo.

12. Alberto Rescia, son of Sergio Rescia in the Instrumentation Division, is a senior at Earl L. Vandermeulen High School and resident of Port Jefferson. He plans to attend college in Italy to study physics or chemistry.

13. Amelia Veitch lives in Bellport, will graduate from Bellport Senior High School, and is the daughter of Alison Flodin in the Facility Operations Center. She will go to the University at Buffalo to major in civil, structural, and environmental engineering.

14. Kevin White, a resident of North Babylon, is the son of Michael White in the Chemistry Department and a senior at North Babylon High School. He will major in applied math at Stony Brook University for a career in economics.

15. Raymond Yin, a senior at Ward Melville High School and resident of Stony Brook, is the son of Zhijian Yin of the Photon Sciences Directorate. He will study engineering and applied science at the University of Pennsylvania.