Physicists Detect Process Even Rarer than the Long-Sought Higgs Particle 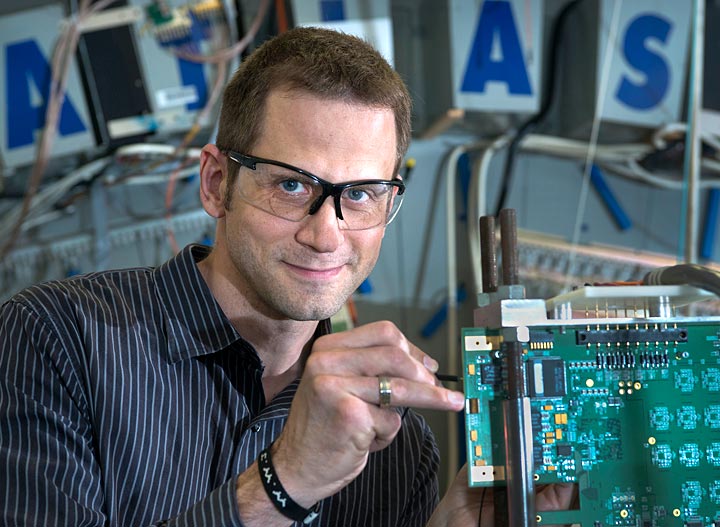 Scientists running the ATLAS experiment at the Large Hadron Collider (LHC), the world’s largest and most powerful “atom smasher,” report the first evidence of a process that can be used to test the mechanism by which the recently discovered Higgs particle imparts mass to other fundamental particles. More rare than the production of the Higgs itself, this process—a scattering of two same-charged particles called W bosons off one another—also provides a new stringent test of the Standard Model of particle physics. The findings, which so far are in agreement with predictions of the Standard Model, are reported in a paper just accepted by Physical Review Letters.

“By measuring this process we can check whether the Higgs particle we discovered does its job the way we expect it to.”

“Only about one in 100 trillion proton-proton collisions would produce one of these events,” said Marc-André Pleier, a physicist at the U.S. Department of Energy’s Brookhaven National Laboratory who played a leadership role in the analysis of this result for the ATLAS collaboration. Complicating matters further, finding one such rare event is not enough. “You need to observe many to see if the production rate is above or on par with predictions,” Pleier said. “We looked through billions of proton-proton collisions produced at the LHC for a signature of these events—decay products that allow us to infer like Sherlock Holmes what happened in the event.”

The analysis efforts started two years ago and were carried out in particular by groups from Brookhaven, Lawrence Berkeley National Laboratory, University of Michigan, and Technische Universität Dresden, Germany. Preliminary results were presented by Pleier at the “Rencontres de Moriond – QCD and High Energy Interactions” conference in March 2014. Now finalized based on a total of 34 observed events, the measured interaction rate is in good agreement with that predicted by the Standard Model, a theory describing all known fundamental particles and their interactions.

CMS, another large experiment collaboration at the LHC, presented results on this topic at the recent International Conference on High Energy Physics.

“The Standard Model has so far survived all tests, but we know that it is incomplete because there are observations of dark matter, dark energy, and the antimatter/matter asymmetry in the universe that can’t be explained by the Standard Model,” Pleier said. So physicists are always looking for new ways to test the theory, to find where and how it might break down.

“This process of W boson interactions is one we could never test,” Pleier said, “because we didn’t have enough energy or large enough data sets needed to see this very rare process—until we built the LHC.”

Now with the LHC data in hand, the measured rate agrees with the prevailing theory’s predictions and establishes a signal at a significance level of 3.6 sigma—strong evidence, according to Pleier. “The probability for this measurement to be a mere background fluctuation is very small—about one in 6000,” he said. But the physicists would like to be more certain by collecting more data to reduce uncertainties and increase the level of significance. 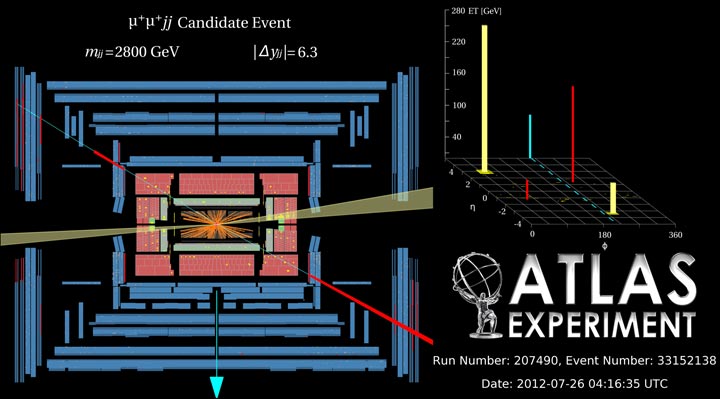 There’s another reason for continuing the quest: “By measuring this process we can check whether the Higgs particle we discovered does its job the way we expect it to,” Pleier said. “A wealth of models in addition to the Higgs mechanism exists to try to explain how fundamental particles get their mass. Measurements of such scattering processes can thus be both a fundamental test of the Standard Model and a window to new physics.”

To test the Higgs mechanism, the scientists compare distributions of decay products of the W scattering process—how often they observe particular products at a particular energy and geometrical configuration.

Again, so far, the data indicate that the Higgs is working as expected.

“For the first time, we can rule out certain models or predictions that we could not before,” Pleier said. “To complete the job, we need more data, at higher energy, so we can see the fingerprint more clearly.”

The LHC will resume data taking at increased collision energies—13 tera-electronvolts (TeV) instead of 8 TeV—in spring of 2015.  The datasets collected will be up to 150 times the size of the currently available data and will allow for a detailed behind-the-scenes look at the Higgs at work.

The ATLAS experiment at LHC is supported by DOE’s Office of Science and the National Science Foundation.

Brookhaven National Laboratory serves as the U.S. host laboratory for the ATLAS experiment at the LHC, and plays multiple roles in this international collaboration, from construction and project management to data storage, distribution, and analysis, funded by the DOE Office of Science (HEP). For more information about Brookhaven’s role, see: http://www.bnl.gov/ATLAS/