This story originally ran on the website of Open Science Grid, which provides common service and support for resource providers and scientific institutions using a distributed fabric of high throughput computational services: http://www.opensciencegrid.org/using-the-osg-to-plan-for-an-electron-ion-collider-at-brookhaven/. It is reposted with permission.

By Greg Moore and Sarah Engel 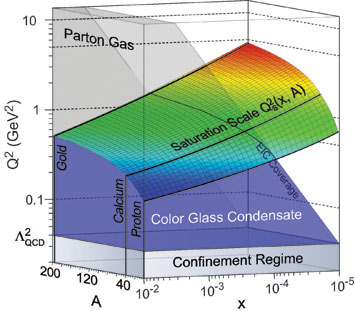 Figure 1: Illustrating the study of quantum chromodynamics. The saturation scale as a function of momentum fraction x, resolution Q2 and nuclear mass number A.
Diffractive QCD has much in common with diffraction of light: light shining on an obstacle makes a diffractive pattern of more and less intense regions behind it, and the angular spread of bright and dark regions is directly related to the size and shape of the obstacle. Using the same principles but with QCD, diffractive electron-ion collisions can provide information about the size and shape of the atomic nuclei.

In a paper explaining the scientific goals for a new high-energy electron-ion collider (EIC) at Brookhaven National Laboratory, the authors use the phrase, “understanding the glue that binds us all.” One of the co-authors, Liang Zheng, a Ph.D. candidate at Central China Normal University on an exchange program at Brookhaven, explains it this way:

“The EIC is a project to help us understand the origin and structure of the core of the atom, the nucleus and nucleons within it, which account for essentially all the mass of the visible universe. Even though the strong nuclear force, the force that joins the nucleons together to make the atom’s nucleus, makes up 95% of the visible mass of the universe, and indeed us, it is the least understood of the forces in the standard model.”

Quantum chromodynamics (QCD), a theory of strong interactions, has led nuclear scientists to develop new tools that reveal the interactions of quarks and gluons inside protons and neutrons. For researchers at Brookhaven, these new tools could be developed further by the EIC. By adding an electron ring and other accelerator components to the existing Relativistic Heavy Ion Collider (RHIC) at Brookhaven, the EIC could help explain what makes matter stick together. The EIC would be unique among such facilities worldwide, adding a 5- to 10-billion-electron-volt (GeV) electron ring inside the existing RHIC tunnel.

“Our research is going to open a new window for us to gaze into the universe around us and the matter inside us.”

Zheng’s job is to help make the physics case for the EIC. To do that, he runs large Monte Carlo simulation programs on the Open Science Grid (OSG) to try to predict what is going to happen in experiments and to modify the detector setup accordingly. In physics, Monte Carlo methods – named after the gambling method of playing and recording your results – are highly useful for simulations.

Since the physical facility doesn’t yet exist, Zheng and his colleagues need to make predictions and establish parameters for the collider environment. Their simulations run on software called Sartre, developed at Brookhaven specifically to study electron-ion collisions, using random sampling techniques based on the researchers’ numerical calculations. 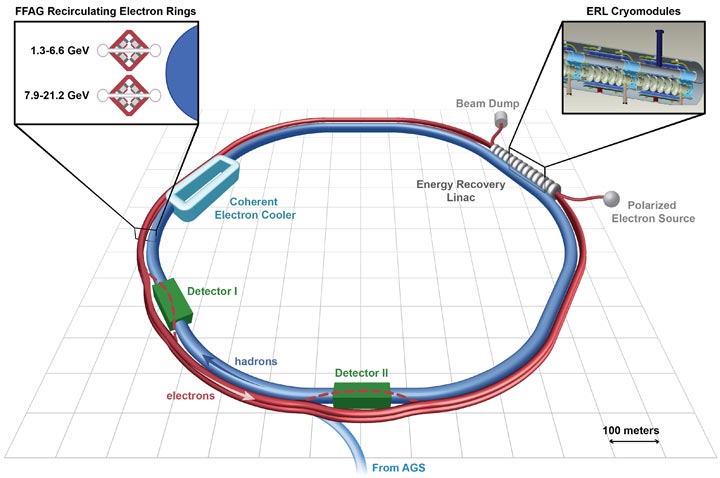 Figure 2: A schematic of the world's first electron-ion collider (EIC). Adding an electron ring (red) to the Relativistic Heavy Ion Collider (RHIC) at Brookhaven would create the eRHIC.

“We have to know what kind of signal we are going to observe in the real experiment,” said Zheng. “Before then, we have to rely on the Monte Carlo predictions. They will tell us what kind of detector we need, and we will design it based on those predictions.”

“The difficulty in the simulations,” continued Zheng, “is that to achieve a prediction with reasonable precision, we have to provide a refined pre-calculated table for the end users of Sartre. The generation of such a pre-calculated table has to deal with an intensive numerical calculation with a sizable data configuration, which needs a powerful computing system. If we didn’t have more powerful computing resources, it would take years to get any reasonable analysis.”

Because the OSG offers freely accessible high-performance computing resources, Zheng can run his large data simulations within an acceptable time schedule. He notes, “We can distribute our program to a wide range of computing nodes that are physically located at many different sites. With the seemingly unlimited computing power of OSG, we are able to solve all the computing challenges we confront in our simulation work.”

As a Ph.D. student in physics, Zheng says his knowledge of distributed computing is very limited. “Sometimes while I am writing or running some job scripts, I will run into some issues that I completely have no idea how to deal with,” he readily admits. “At these moments, the OSG support group is always very helpful, especially our local technical support, Alexandr Zaystev – and Chander Sehgal, Marko Slyz, and Tanya Levshina at Fermilab. They are a group of very professional people who can help me solve all sorts of problems. During this process, I have learned a lot of useful tricks.”

“I really wish to recommend the OSG to other scientists who need to deal with large-scale data or intensive computing jobs,” Zheng added. “It is easy to get started, and you can always get help from the people in this great community.”

“Our research is going to open a new window for us to gaze into the universe around us and the matter inside us,” Zheng said. “It will shed light on our understanding of the fundamental building blocks of the visible universe. It will provide a cost-effective way for us to get a new source of knowledge and a platform to test some of our newest technologies. By exploring a region which is largely unknown to us in the strong force, it is research exploring the interactions that bind us all.”