Different types of atoms can be ionized within seconds, a switchover that used to take several hours 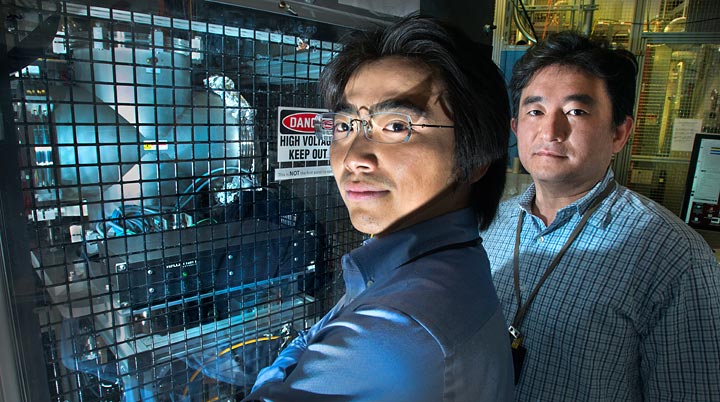 Takeshi Kanesue (left) and Masahiro Okamura at the new Laser Ion Source (LION). LION allows superfast switching of ion species to feed beams into either RHIC, which recreates the conditions of the early universe, or NSRL, which can now more realistically simulate the radiation astronauts would experience in deep space.

Microwaving popcorn never quite turns out right. Inevitably, some kernels remain unpopped while others burn. Scientists at the U.S. Department of Energy’s Brookhaven National Laboratory were experiencing a similar phenomenon with their ion source, the device that feeds singly ionized atoms into the particle accelerators that supply beams to the Relativistic Heavy Ion Collider (RHIC) and the NASA Space Radiation Laboratory (NSRL).

Some ions reached the optimum charge state, while others didn’t have enough charge or had too much. But in March of this year, a new Laser Ion Source (LION) started operating. LION allows superfast switching of ion species to feed beams into either RHIC, which recreates the conditions of the early universe, or NSRL, which can now more realistically simulate the radiation astronauts would experience in deep space.

LION delivers a burst of intense current to the Electron Beam Ion Source (EBIS), the next link in the accelerator chain feeding RHIC and NSRL, which increases the ion’s charge state by stripping its electrons. The required injection time into EBIS is much less than the previous ion source, so scientists can throw a bowl of popcorn kernels — ions — into the “microwave” with one action instead of filling it over time. That allows them to get all of the ions needed to the desired charge state all at once. Getting to this charge state gives the ions the positive electric charge they need in order to be accelerated by powerful electric fields down the line before they reach RHIC and NSRL.

“The structure of a laser ion source is simple,” said physicist Masahiro Okamura, LION’s lead designer. The whole device is, in fact, about the size of a microwave oven. “But to get the right conditions for superior performance, that’s not so simple,” he added, saying it took a lot of work to get the measurements and conditions just right. “Many students worked with me and we spent a lot of time going over it again, again, again. To get the right conditions you need to do basic research on many, many things.”

LION’s working even better than its designers expected. Okamura said they were only going to try out the new device for two days, but it worked so well that it’s been in use ever since.

Another advantage of LION is that it produces purer ion beams. The old ion source used neon gas to charge the ions, which meant that neon ions were also present in the ion beam. Any impurity from these “junk ions,” Okamura said, reduced the ion number — the opposite of what a pre-injector needs to do. 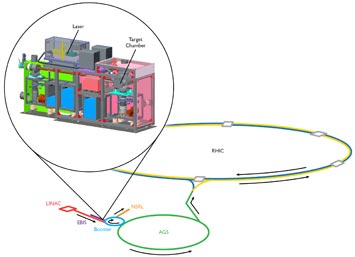 The Laser Ion Source feeds beams into RHIC and NSRL.

With LION, scientists can also load multiple samples of different elements like gold, silver, carbon, and aluminum, onto a motorized target. Depending on which type of ion the scientists in RHIC or NSRL want to use, the target shifts to dispense the sample “like a vending machine,” Okamura said. The laser then points at a sample and evaporates it into plasma, ionizing the atoms to the desired charge state.

Because of the motorized target, LION can switch from ionizing one atomic element to another in five seconds — a process that Okamura said used to take several hours. This ensures RHIC and NSRL can both receive different beams of different ion types at different energies almost simultaneously, a feature that makes scheduling experiments much easier.

The quick switchover also allows scientists at NSRL to achieve more accurate simulations of galactic cosmic rays, high-energy streams of particles that astronauts would experience on a mission to Mars, for example.

“Galactic cosmic rays consist of every ion on the periodic table at different intensities and different energy spectra — all the ions that are out there in space radiation. To simulate this, you need to have the capability of delivering any ion you want,” said NSRL physicist Adam Rusek. “This was the motivation behind the Laser Ion Source, because anything that can be evaporated by a laser can be delivered ultimately into the accelerator and into NSRL.”

A longterm goal for NSRL, Rusek said, is to develop a standard test that would mimic the onslaught of galactic cosmic rays that people and equipment would experience in space to determine if they could be sufficiently protected from the effects. Right now LION is the most promising method for them to do so.

“Any tool that you have that gives you more flexibility, room for growth, room for developments, is always seen as a good thing,” Rusek said. “The Laser Ion Source holds that promise.”

LION is jointly funded by NASA and the DOE Office of Science.