Columbia researchers used Brookhaven Lab supercomputer simulations to map and compare the transformations and breaking points of graphene and other promising monolayers.

Interested in an ultra-fast, unbreakable, and flexible smart phone that recharges in a matter of seconds? Monolayer materials may make it possible. These atom-thin sheets—including the famed super material graphene—feature exceptional and untapped mechanical and electronic properties. But to fully exploit these atomically tailored wonder materials, scientists must pry free the secrets of how and why they bend and break under stress.

Top and side views of soft mode instabilities in strained monolayer materials. In graphene, boron nitride, and graphane the backbone distorts towards isolated six-atom rings, while molybdenum disulfide undergoes a distinct distortion towards trigonal pyramidal coordination.

“To see the beautiful patterns exhibited by these materials at their breaking points for the first time was enormously exciting—and important for future applications.”

Fortunately, researchers have now pinpointed the breaking mechanism of several monolayer materials hundreds of times stronger than steel with exotic properties that could revolutionize everything from armor to electronics. A Columbia University team used supercomputers at the U.S. Department of Energy’s Brookhaven National Laboratory to simulate and probe quantum mechanical processes that would be extremely difficult to explore experimentally.

They discovered that straining the materials induced a novel phase transition—a restructuring in their near-perfect crystalline structures that leads to instability and failure. Surprisingly, the phenomenon persisted across several different materials with disparate electronic properties, suggesting that monolayers may have intrinsic instabilities to be either overcome or exploited. The results were published in the journal Physical Review B. 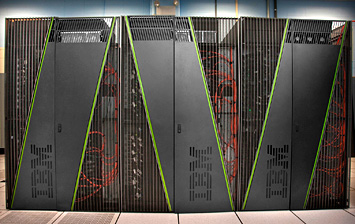 “Our calculations exposed these monolayer materials’ fundamental shifts in structure and character when stressed,” said study coauthor and Columbia University Ph.D. candidate Eric Isaacs. “To see the beautiful patterns exhibited by these materials at their breaking points for the first time was enormously exciting—and important for future applications.”

Graphene and other monolayer materials feature exotic electronic and mechanical properties—atomically thin, ultra light, and stronger than steel. But how do these promising materials transform and fail under strain?

What did the scientists learn? They pinpointed the breaking points and failure mechanisms for these atom-thin super materials. When stressed, so-called “soft mode” instabilities emerge that cause characteristic atomic reconfigurations—surprisingly, this behavior persisted across different monolayer materials.

How did they do it? Using quantum mechanical laws and supercomputers, they simulated the atomic structure and vibrational modes of materials under different degrees of duress. Scientists strained and stressed these monolayer materials to the point of breaking—all virtually.

What’s the impact? Everything from microelectronics to powerful, lightweight armor might be advanced by understanding how monolayer materials perform under stress.

Monolayer materials experience strain on atomic scales, demanding different investigative expertise than that of the average demolition crew. Isaacs and his collaborators turned to a mathematical framework called density functional theory (DFT) to describe the quantum mechanical processes unfolding in the materials.

“DFT lets us study materials directly from fundamental laws of physics, the results of which can be directly compared to experimental data,” said Chris Marianetti, a professor of materials science at Columbia University and coauthor of the study. “We supply the fundamental constants and the material’s nuclei, and using DFT we can closely approximate real characteristics of the material under different conditions.”

In this study, DFT calculations revealed the materials’ atomic structures, stress values, vibrational properties, and whether they acted as metals, semiconductors, or insulators under strain. Toggling between or sustaining those conductive properties are particularly important for future applications in microelectronics.

“Testing all the different atomic configurations for each material under strain boils down to a tremendous amount of computation,” Isaacs said. “Without the highly parallel supercomputing resources and expertise at Brookhaven, it would have been nearly impossible to pinpoint this transition in strained monolayers.”

Everything breaks under enough stress, of course, but not everything meaningfully transforms along the way. A bending oak branch, for example, doesn’t enter a strange transition phase as it creeps toward its breaking point—it simply snaps. Monolayer materials, it turns out, play by very different rules.

Within the honeycomb-like lattices of monolayers like graphene, boron nitride, and graphane, the atoms rapidly vibrate in place. Different vibrational states, which dictate many of the mechanical properties of the material, are called “modes.” As the perfect hexagonal structures of such monolayers are strained, they enter a subtle “soft mode”—the vibrating atoms slip free of their original configurations and distort towards new structures as the materials break.

“Imagine a skateboarder in a half-pipe,” Isaacs said. “Normally, the skater glides back and forth but remains centered over the bottom. But if we twist and deform that half-pipe enough, the skateboarder rolls out and never returns—that’s like this soft mode where the vibrating atoms move away from their positions in the lattice.”

The researchers found that this vibrational soft mode caused lingering, unstable distortions in most of the known monolayer materials. In the case of graphene, boron nitride, and graphane, the backbone of the perfect crystalline lattice distorted toward isolated hexagonal rings. The soft mode distortion ended up breaking graphene, boron nitride, and molybdenum disulfide.

As the monolayers were strained, the energetic cost of changing the bond lengths became significantly weaker—in other words, under enough stress, the emergent soft mode encourages the atoms to rearrange themselves into unstable configurations. This in turn dictates how one might control that strain and tune monolayer performance.

“Our work demonstrates that the soft mode failure mechanism is not unique to graphene and suggests it might be an intrinsic feature of monolayer materials,” Isaacs said.

Armed with this knowledge, researchers may now be able to figure out how to delay the onset of the newly characterized instabilities and improve the strength of existing monolayers. Beyond that, scientists may even be able to engineer new ultra-strong materials that anticipate and overcome the soft mode weakness.

“Beyond the thrill of the discovery, this work is immediately useful to a large community of researchers excited to learn about and exploit graphene and its cousins,” Isaacs said. “For example, we’ve been working with Columbia experimentalists who use a technique called ‘nanoindentation’ to experimentally measure some of what we simulated.”

Brookhaven Lab is supported by the Office of Science of the U.S. Department of Energy.  The Office of Science is the single largest supporter of basic research in the physical sciences in the United States, and is working to address some of the most pressing challenges of our time.  For more information, please visit science.energy.gov.