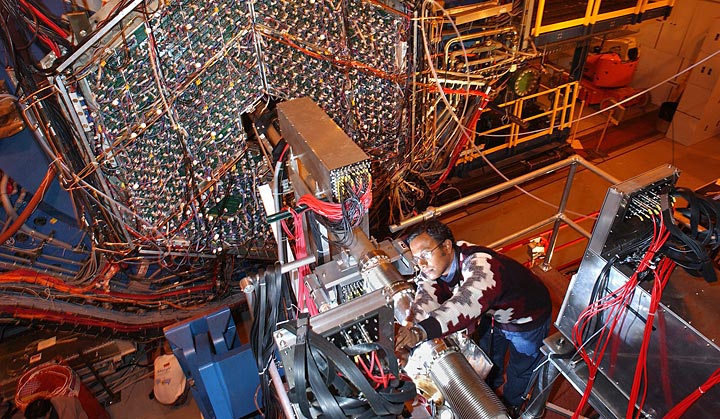 Debasish Das working at the STAR detector at RHIC.

“I had no idea before I joined the RHIC community how a large collaboration runs,” said Debasish Das, who conducted research as part of the STAR collaboration at the Relativistic Heavy Ion Collider (RHIC) while earning his Ph.D. in nuclear physics from Jadavpur University, Kolkata, India. Now an Associate Professor at Saha Institute of Nuclear Physics, Kolkata, and continuing his exploration of the intricacies of heavy ion collisions as part of the ALICE collaboration at the Large Hadron Collider, Das says his time at Brookhaven National Laboratory’s world-class collider, a U.S. Department of Energy Office of Science User Facility, taught him valuable lessons he applies and imparts to his own students today.

“The experiences I learned from STAR/RHIC … have helped me immensely.”

“My RHIC experience gave me a sense of discipline and also how to share even while retaining scientific credit,” he says. “The very thought of 500+ authors on a single paper made me feel excited and, at the same moment, apprehensive as to where
I stand among them.”

He first came to Brookhaven in spring 2004 to help commission the STAR Photon Multiplicity Detector, which was built by a collaboration of Indian scientists. This detector picks up signs of photons emitted from the hot soup of quarks and gluons produced in RHIC collisions, carrying clues about the transition that freed these particles from their more usual confinement within the protons and neutrons of ordinary atomic nuclei.

“I used to commute on a cycle, which was my only mode of transport for going from the dorms in the wee hours to the STAR control room.” One day he received a call from the shift leader asking him to come over if he wanted to take some data he needed for a particular analysis. “I barely managed to reach the control room just before they were about to start. It was indeed a breathtaking experience,” he said.

Even after completing his Ph.D. in 2007, he continued working on experiments at STAR and collaborating with Brookhaven physicists as a postdoc in the University of California-Davis physics group. In 2008, he presented the first plot of “upsilon invariant mass” in heavy ions—a thermometer for measuring the temperature of the matter created in RHIC collisions—during the Quark Matter 2008 meeting, held in Jaipur, India. “I felt awed and at the same time humbled to be a part of this exciting first moment, particularly to do it in my home country. It gave me goose bumps,” he said.

“Being from this part of the world and being able to communicate with people from all parts of the world—Europe, America, even Africa—is very important, especially coming from a small town where I was born. I like talking to people from different cultures. It has been a wonderful experience for me.”

Das’ comfort with being part of a large, international group has only grown. “ALICE is even bigger than STAR, with more than 1,000 scientists.”

As the run coordinator of ALICE’s muon spectrometer during the summer of 2010, “I did not have much trouble, since the experiences to trouble shoot were already in my mind based on my RHIC days.”

“Now I often share with my juniors and students the experiences I learned from STAR/RHIC, which have helped me immensely in my current role as coordinator of a dedicated upsilon physics analysis group at ALICE.”