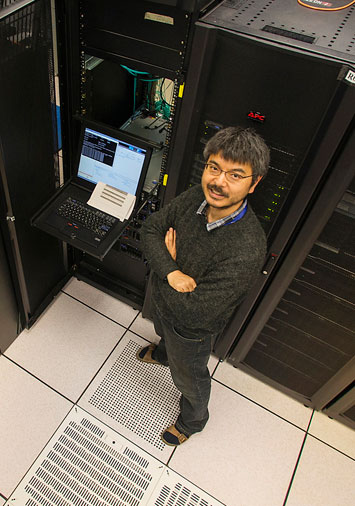 Physicist Taku Izubuchi of Brookhaven Lab's Physics Department has been awarded tenure for his pioneering accomplishments and leadership contributions in computational approaches to the study of quantum chromodynamics (QCD)—the theory that describes subatomic quarks, gluons, and their interactions inside protons, neutrons, and mesons. His "lattice gauge formulations," which break these complex physics problems into solvable pieces, have resulted in significant advances in theoretical calculations that enable fundamental measurements in particle physics.

Izubuchi has made important contributions in developing the mathematical tools for exploring QCD using a four-dimensional space-time lattice, expanding on techniques originally developed by Brookhaven's Michael Cruetz. He has contributed to the development of hardware and software for these numerical calculations using the world's most powerful supercomputers, and helped to identify and pursue the important physics problems these techniques can address—including searches for physics beyond the Standard Model and the exploration of fundamental asymmetries in the early universe. Among his extensive list of scientific publications are several highly cited for their innovative methodology and insight into important physics questions.

"One of Taku's computational methods could become a 'game-changer,' reducing errors in a way that would significantly reduce computational time, and therefore costs," said Thomas Ludlam, physics department chair at the time of Izubuchi's tenure nomination.

As Ludlam noted, Izubuchi plays a leading role in the RIKEN (Japan)-BNL-Columbia and UKQCD collaboration, and had a vital role in the recent installation at Brookhaven of the powerful BlueGene/Q supercomputer for lattice computation. He also serves on the Scientific Program Committee of the USQCD collaboration, which oversees the allocation of nationally funded supercomputing resources for lattice calculations.

Said Ludlam, "There is little question that lattice gauge calculations will be central to Brookhaven's flagship experiments in both high energy and nuclear physics for many years to come, and Taku is widely recognized as one of a handful of young theorists who will be leading the future U.S. effort in this field."

Izubuchi received his Ph.D. in 1997 from the University of Tokyo. He held a postdoctoral position at the University of Tsukuba for two years before becoming a tenured assistant professor at Kanazawa University. In 2008, he left that position to join Brookhaven Lab with a joint position as a RIKEN/BNL Research Center (RBRC) Fellow and a member of the High Energy Theory group in the Physics Department. In 2011, he became a founding group leader of the Computing Group of RBRC, and he is now a full-time member of the Physics Department. Highly sought for invited talks at international physics conferences, Izubuchi also helps to train future physicists through his guidance of postdoctoral fellows and graduate students.