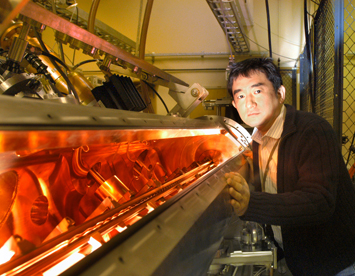 Okamura developed a completely new scheme based on laser ablation to produce and accelerate high-current, high-charge-state heavy ion beams. These techniques were later applied to significantly enhance the performance of an ion source that feeds both RHIC and NSRL. Scientists collide the heavy ion beams at RHIC to recreate the conditions of the early universe so physicists can study the building blocks of visible matter and the force through which they interact. At NSRL, the heavy ion beams simulate radiation astronauts would experience during long-term spaceflight so scientists can better understand the risks to design and test protective strategies.

"The heavy-ion production scheme Okamura developed allows rapid switching between a wide variety of beams so that both programs can operate with great flexibility," said Thomas Roser, chair of Brookhaven Lab's Collider-Accelerator Department, which runs both RHIC and NSRL.

Okamura's heavy-ion production scheme can also be used in heavy ion fusion, where high intensity is of paramount importance, and it is being incorporated into Brookhaven's design of accelerator components that could deliver beams of charged particles for future cancer-treatment facilities. He has also made innovative contributions to the design of partial "Siberian snake" magnets incorporated into Brookhaven's Alternating Gradient Synchrotron and low-energy beamlines—both essential to the study of proton spin at RHIC.

Okamura received his Ph.D. in nuclear engineering from Tokyo Institute of Technology in 1995. As part of his thesis, he designed and led the construction of a radio frequency quadrupole accelerator that is still in active use at that institution. He held a tenured position at the Japanese RIKEN Laboratory before being recruited to join Brookhaven's accelerator science team in 2006.

It was while working at RIKEN's Institute of Physical and Chemical Research that he came up with his idea for the novel heavy-ion production scheme, which eliminated the need for a beam transfer line where beam quality can easily degrade. Facing initial skepticism, Okamura's perseverance paid off with a highly successful test, a patented design, many accolades, and implementation of his technique in accelerators around the world.