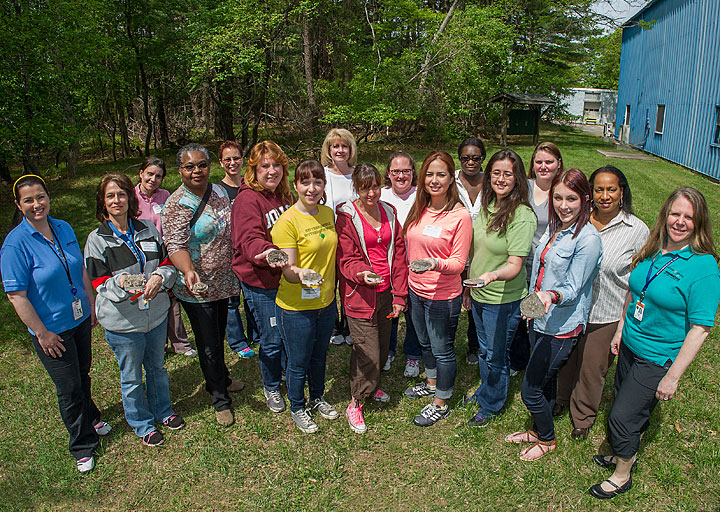 Girl Scouts of Suffolk County staff members and Brookhaven National Laboratory science educators pose with their plaster cast animal tracks, which they made as part of a workshop on Animal Studies at the Lab. Staff members explored topics of animal diversity, habitats, and tracking so they could administer Science, Technology, Engineering, and Math (STEM) workshops to the Girl Scouts and inspire more girls to be interested in science.

Sometimes all it takes for a girl to get interested in science is experiencing it hands-on — like documenting the health of a pond ecosystem by tracking animals, or understanding the physics of static electricity by feeling her hair stand up on end. Seeing the science in action, along with hearing encouragement to learn more about Science, Technology, Engineering, and Math (STEM) fields, can push more girls to consider a career in these disciplines.

The Girl Scouts of Suffolk County (GSSC) organization recognizes the importance of STEM-focused activities, and through its partnership with the U.S. Department of Energy’s (DOE) Brookhaven National Laboratory, has participated in an increasing number of programs every year. Since 2011, Girl Scout troops have come to the Lab to learn about topics such as environmental sciences, nanotechnology, and solar energy, and educators from Brookhaven and the Long Island Matrix for Science and Technology (LIMSAT) have travelled to GSSC summer camps to facilitate STEM programs. This summer, GSSC staff came to the Lab to learn how to administer STEM workshops to the scouts themselves, thereby increasing the number of girls the Brookhaven-developed programs can reach.

Seeing somebody who maybe wasn’t excited about science or who was intimidated by science just have fun with it, and enjoy getting dirty even if they didn’t want to get dirty, is a great reward to see.

“I think this is a good model for how we can impact and reach more students, by using this dissemination approach,” said Brookhaven Science Educator Alexandra Pulecio. “We can only reach so many girls doing the teaching and educating ourselves.”

LIMSAT Assistant Director Kira Schultheiss, a PhD researcher herself, said programs like these reach girls at a “critical age” before some develop the impression that science doesn’t have practical applications, or that it isn’t for them.

“A major goal of the programs is not just to teach science, but to show how you can apply it,” Schultheiss said. “There are a million different roles you can have as an engineer, for example, so understanding how you can bring the applications to a career in this kind of growing field is really important. Even if these girls don’t want to be doctors or research scientists, we want them to be aware of the other options available.”

At the environmental sciences workshop, GSSC staff participants filled mesh bags with leaves and other forest debris, and then tossed them into a pond onsite at Brookhaven. They left the “leaf packs” in the water for three weeks, allowing a plethora of creatures — including aquatic worms, snails, and dragonfly nymphs — to use the mesh islands as a habitat. When they pulled the mini-ecosystems out of the pond, the participants were able to observe first-hand the vast diversity of life that calls the small pond home. It’s these types of hands-on activities that show how science is all around us, Pulecio said, and how much fun it can be to find it.

“Seeing somebody who maybe wasn’t excited about science or who was intimidated by science just have fun with it, and enjoy getting dirty even if they didn’t want to get dirty, is a great reward to see,” Pulecio said.

When GSSC staff members left each workshop, they departed with educational materials supplied by Brookhaven educators so they could administer the STEM programs with their own Girl Scouts. Each curriculum “menu” included ways to alter the activities based on age group, the amount of time available, and the number of girls participating. This approach makes it as easy as possible for the GSSC staff to pass on the science they learned at Brookhaven to the girls, Pulecio said.

The Girl Scout leaders have already started planning what Lab programming they want to participate in next year, which may include topics like physics and nanotechnology.

“We are delighted to partner with Brookhaven National Laboratory in bringing STEM programs to girls, as it affords girls a hands-on approach to exploring the many opportunities that exist in STEM-related fields,” said GSSC President and CEO Yvonne Grant. “Brookhaven National Laboratory has done a fantastic job of training our staff so that we can offer the best STEM experience possible to our membership.” 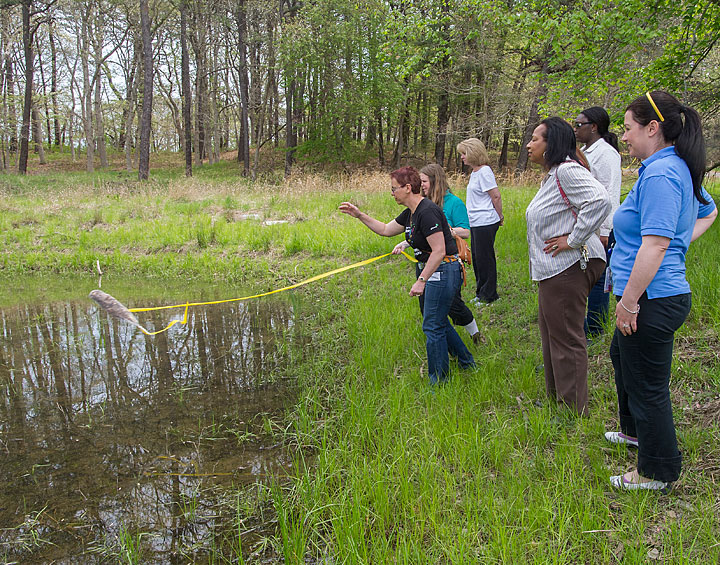 Girl Scouts of Suffolk County staff members toss macroinvertebrate leaf packs filled with forest debris into Weaver Pond at Brookhaven National Laboratory. Staff members were learning about environmental sciences as part of an educational program at the Lab so they could teach Science, Technology, Engineering, and Math (STEM) workshops to the Girl Scouts. 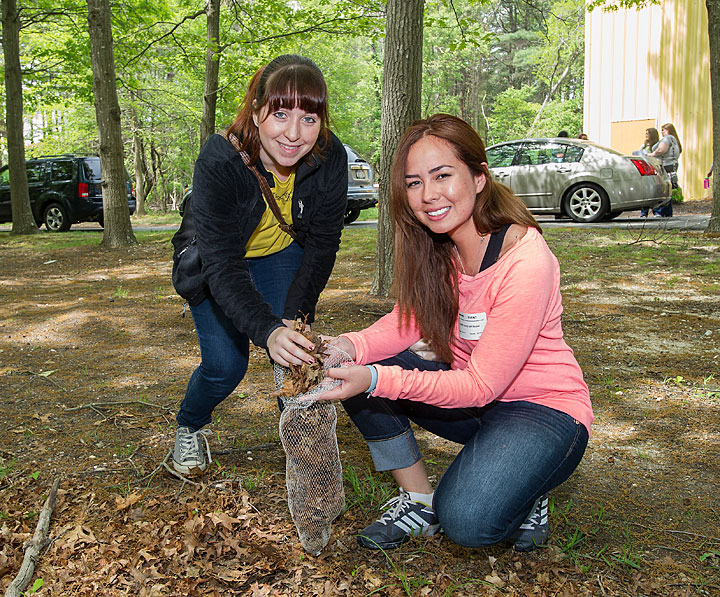 Girl Scouts of Suffolk County staff members fill a mesh bag with leaves to create a home for pond creatures like aquatic worms, snails, and dragonfly nymphs. GSSC staff were learning about animal diversity and the environmental sciences at Brookhaven National Laboratory so they could inspire the girl scouts to learn more about Science, Technology, Engineering, and Math (STEM) fields in similar workshops. 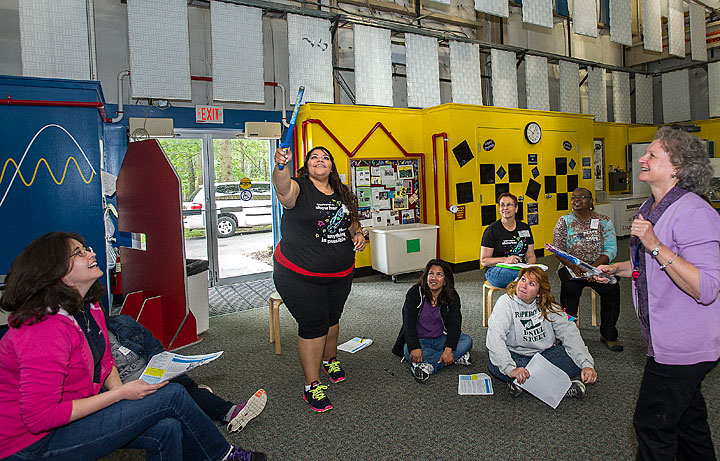 A Girl Scouts of Suffolk County staff member uses a Fun Fly Stick Static Generator to levitate a tinsel ribbon as other participants in Brookhaven National Laboratory's workshop on static electricity look on. The Fun Fly Stick is a battery operated static electricity generator that allows you to float tinsel shapes on a cloud of electrons. Pressing the button on the Fun Fly Stick for a few seconds generates a static charge so when you drop the tinsel shape onto the stick, it quickly transfers the negative charge to the tinsel. Since like charges repel each other, the negatively charged tinsel shape floats above the negatively charged stick. 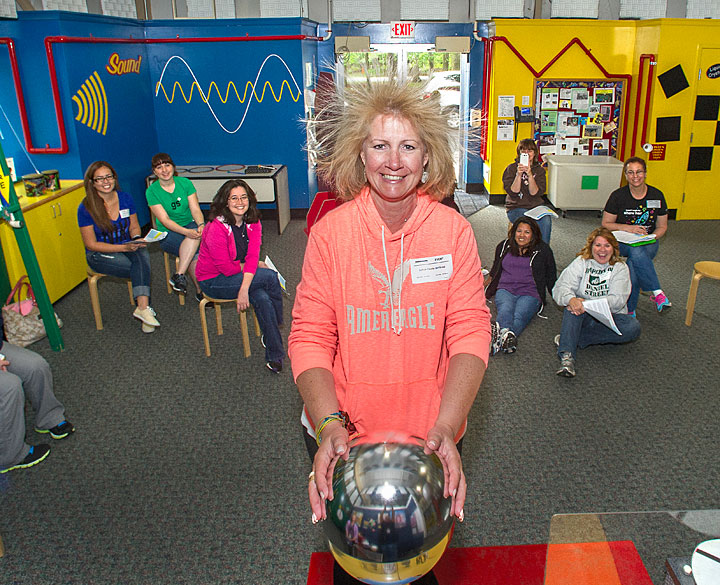 A Girl Scouts of Suffolk County staff member's hair stands on end as she places her hands on the Van de Graff generator, propelled by the power of static electricity. Charge builds up on the Van de Graff, and transfers to her hands when she places them on the generator. Once the electric charge courses through her body and reaches her hair, it makes the hair follicles repel one another since they reach the same potential, so they stand up. Using hands-on activities like this one, the GSSC staff will teach the girl scouts about the science they learned at Brookhaven National Laboratory workshops.