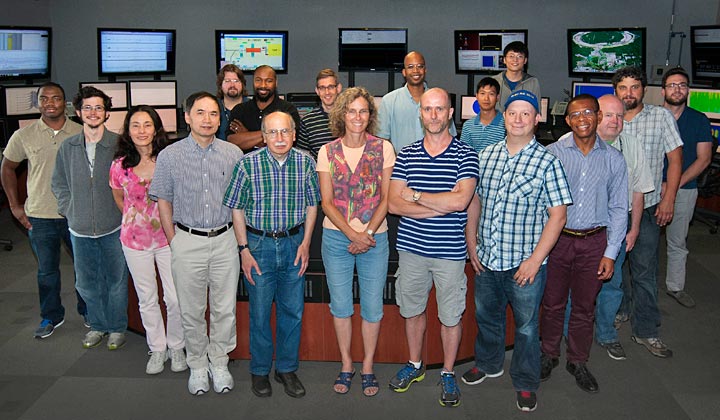 The familiar lighter-than-air gas filling birthday balloons has a rare isotope: a nucleus consisting of two protons and a single neutron called helium-3. But instead of using this gas for fanciful decorations, scientists at the U.S. Department of Energy’s (DOE) Brookhaven National Laboratory made use of its interesting triangular shape in a new series of collisions in the Relativistic Heavy Ion Collider (RHIC)—an atom smasher probing the structure and properties of the building blocks of matter.

“We already knew that RHIC is the most versatile collider in the world, but the fact that it exceeded even the most optimistic expectations in the helium-3 on gold run is truly a feat for the record books.”

Over the last 14 years, scientists have used the RHIC accelerator to collide many types of nuclei, both large and small, and to create and study quark-gluon plasma (QGP), a trillion-degree substance that mimics what existed at the dawn of the universe. This year, in RHIC Run 14, scientists spent months colliding gold nuclei, initially at low energy and then at RHIC’s top energy. Everything went so well — Run 14 produced more collisions than all of the previous RHIC runs combined — that RHIC scientists seized the opportunity to capitalize on RHIC’s legendary versatility to try something they had never done before: collisions of the rare triangular He-3 nucleus with gold.

“We already knew that RHIC is the most versatile collider in the world,” said Associate Laboratory Director for Nuclear and Particle Physics Berndt Mueller, “but the fact that it exceeded even the most optimistic expectations in the helium-3 on gold run is truly a feat for the record books. I congratulate the RHIC operations staff for this outstanding achievement.” 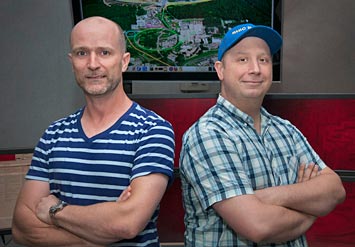 RHIC accelerator scientists use many techniques and a wide array of devices to keep the beams circulating inside tightly controlled and focused in order to produce more effective collisions. This run, RHIC scientists were commissioning a number of new features on both the detectors’ side and on the collider-accelerator side, including a new Laser Ion Source to feed particle beams into the machine.

“Every single thing that could be pushed to its limit was pushed to its limit,” said Run Coordinator Guillaume Robert-Demolaize. “We really maximized the contribution of everybody involved to dredge every bit of physics that we could get out of the machine.”

“With the new RF cavity,” Low Energy Run Coordinator Christoph Montag said, “we demonstrated that we have expertise in building, installing, commissioning, and operating superconducting cavities here at Brookhaven.” 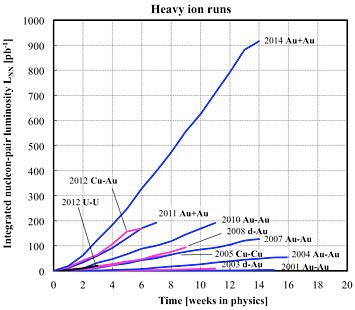 These improvements, many of which were part of the RHIC II upgrade, enabled the machine to achieve an integrated luminosity — a measure of machine performance directly tied to the number of collisions for research — almost 800 times higher than the integrated luminosity reached during the first full-energy RHIC run in 2001. Back then, RHIC produced about 600 million collisions over the entire 16-week run. This year, RHIC produced that many collisions every three hours.

Zhangbu Xu, spokesperson for the STAR detector collaboration, said this incredible improvement was because both the complicated system of accelerators feeding into RHIC can now produce such high collision rates, and because the detectors can now record data at such a high rate to observe more collisions. For example, this year the STAR detector observed the number of collisions produced in the entire 2001 run every five minutes. This also means that the cost of a single nuclear collision at RHIC has been reduced by almost a factor of 1000 over the past 13 years.

“The Collider-Accelerator Department can deliver a lot of luminosity,” Xu said, “and STAR and PHENIX have improved their capability to detect the luminosity.”

More collisions mean more RHIC science. Some particles that give RHIC scientists new ways to investigate the physics of the QGP are produced very rarely (for example, the very heavy B meson). So physicists need to collect massive amounts of data to have enough of these rare events to study. More collisions also allow scientists to analyze the highest quality data with the fewest uncertainties—the events recorded when all parts of the complex detectors were performing optimally, and where the ions collided just right.

“The high luminosity of Run 14 succeeded in providing more collisions than even the most optimistic forecasts had anticipated,” said PHENIX detector collaboration co-spokesperson Dave Morrison. 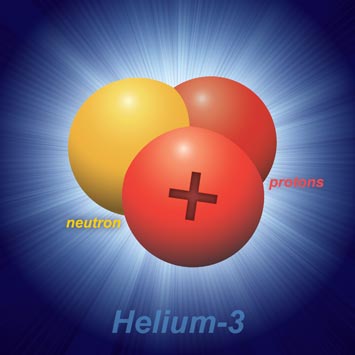 A helium-3 ion stripped of its electrons. Leveraging the starting triangular shape of helium-3 when colliding it with gold is a powerful tool for investigating the physics of quantum chromodynamics (QCD), the theory that describes the interactions of subatomic quarks and gluons.

When two gold nuclei smash into each other in a RHIC collision, the “shape” of the QGP that results depends on how the two nuclei collide. A head-on collision produces a round blob of QGP, while a glancing collision makes a more elongated shape.

Whatever shape it starts out with, the blob cools down and vaporizes into particles in the blink of an eye. As such, different starting shapes can produce different subatomic particle emission patterns. When a spherical proton collides with a gold nucleus, for example, it smashes straight through, producing a circular pattern of subatomic particles flowing around the impact point.

Scientists at RHIC use this connection between starting shapes and ending patterns to investigate the physics of quantum chromodynamics (QCD), the theory that describes the interactions of subatomic quarks and gluons. Being able to control the starting shape precisely is a powerful tool in this investigation.

The best way to test our understanding of how QGP behaves, Morrison said, is to subject it to different conditions, to “poke it” to see how it responds, like you would to find out more about any material. Since helium-3 is shaped a bit like a triangular cookie cutter, he said, its collision with a gold nucleus provides a fantastic new tool for controlling the starting shape of the collision.

Morrison said they proposed colliding helium-3 and gold after the high- and low-energy gold-gold collisions went so well that both the STAR and PHENIX detectors had collected the data they needed for this year’s experiments.

“This was really an opportunity to flexibly address physics that is very current, and has a lot of potential to answer a lot of questions,” Morrison said. “And RHIC is versatile enough to be able to accelerate pretty much anything you can put in the beam pipe.”

A good year to be ‘luminosity hungry’

To study the QGP in a different way, physicists with the STAR detector have been working on a “beam energy scan” to determine at what collision energy matter turns into the hot primordial soup. Analysis of existing data offered tantalizing hints that a possible “critical point” of the phase transition into QGP might take place at a low energy. So for the first three weeks of Run 14, RHIC ran at 7.3 GeV per nucleon, an energy lower than the nominal injection energy of the machine.

Xu said the team is now analyzing the 5.8 petabytes (PB) of data STAR collected from the high and low energy gold collisions this run, an amount of data that would be like watching HD TV streaming for 100 years.

This run also marked the first appearance of the STAR Heavy Flavor Tracker (HFT), a device that can detect the decay products of particles like “charm” and “beauty” quarks, which are much heavier than the “up” and “down” quarks that make up ordinary matter. Xu said the team is excited to analyze the wealth of data that the HFT provided.

STAR’s Muon Telescope Detector, which measures the heavier counterparts of electrons, was also new this year. It was an opportune time, Xu said, since this detector component is “luminosity hungry,” requiring a lot of collisions produced under very stable conditions—a difficult combination achieved during this run.

“Almost any condition we ask for, the Collider-Accelerator Department can actually make it happen,” Xu said, “making the experiments we want to carry out possible.”

Looking ahead to Run 15

Before Run 14 ended, RHIC scientists were already preparing for next year’s run when, for the first time at RHIC, physicists will collide gold ions with protons. Since gold has a ratio of mass to electrical charge that's very different from that of protons, the superconducting magnets that steer the ion beams inside RHIC have to be physically moved two inches in order to aim these different beams into collision. While the scientists who designed RHIC had the foresight to make the magnets movable, Montag said, they have never actually had to move them.

Physicists will also collide polarized protons next run, which they first did in 2001, to further probe where protons get their spin.

“What can we do to keep pushing? What can we do to deliver even more physics?” Robert-Demolaize said they must always ask themselves. “Ultimately, the success of a run depends on the team.”