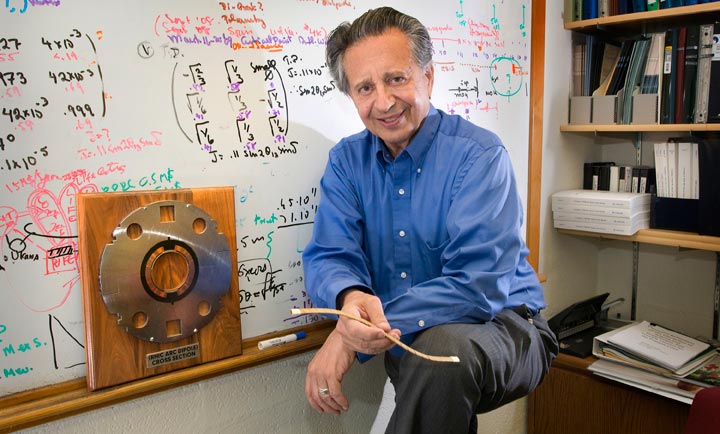 Nicholas Samios, a former Brookhaven Lab director whose career as a Lab employee spanned 55 years, was named senior scientist emeritus when he retired Sept. 30, 2014. Recognized for his noteworthy contributions to the Laboratory's reputation as a world-class scientific institution, Samios now retains many of the rights, privileges, and obligations of active employees. He is also expected to engage in continued research, activities beneficial to the Laboratory, and mentoring junior staff members.

"Nick Samios' vision and leadership, his scientific accomplishments, and his boundless energy have produced a remarkable set of contributions across the scientific enterprise, to science and to Laboratory leadership, both at home and internationally," said Brookhaven Lab Director Doon Gibbs. "He changed the face of Brookhaven Lab during his tenure as director and took us in directions that we will continue to explore for years to come. Few scientists have the kind of impact he has had in his career. It is a pleasure to recognize his achievements and warmly congratulate him on this next step in his career." 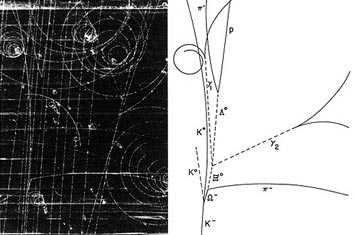 An image and illustration of the first observed omega minus particle using a bubble chamber and Brookhaven Lab's Alternating Gradient Synchrotron in 1964. While leading a team of physicists from Brookhaven, the University of Rochester, and Syracuse University, this was one of Nicholas Samios' most notable discoveries during his 55-year career at Brookhaven.

Samios made many of the discoveries that helped define and lead to the acceptance of the Standard Model of particle physics, the theory that identifies all known subatomic particles and explains how they interact. His contributions also led to the formulation of the quantum chromodynamics theory of "strong" interactions that confine subatomic quarks and gluons in protons and neutrons. In particular, Samios is noted for discovering particles called the phi meson and omega minus baryon—crucial elements delineating the symmetry of quark-based particles, which ultimately led to the quark model, a pillar of the Standard Model.

With roles leading up to a 15-year tenure as lab director from 1982 to 1997, Samios led efforts to capitalize on the Lab's existing facilities and capabilities, and was ultimately responsible for building the Relativistic Heavy Ion Collider (RHIC) at Brookhaven Lab. The first proposal for RHIC was submitted in 1984, during Samios' second year as director, and plans were particularly cost-effective, because they leveraged the Lab's existing Alternating Gradient Synchrotron accelerator complex as well as the tunnel excavated for the planned ISABELLE-colliding beam accelerator facility that was discontinued in 1983.

In 2000, three years after Samios returned to research, particle collisions at RHIC began to re-create the first microseconds of the early universe, enabling detailed explorations of the properties of quark-gluon plasma and investigations of another scientific mystery: how the pieces of a proton come together to give the proton its spin. Now in its second decade of operations—the "RHIC-II era" with unprecedented collision rates—physicists' plans are underway for a proposed electron-ion collider upgrade, called eRHIC, for a third decade of scientific exploration at the facility beginning in the 2020s.

Samios also made significant scientific contributions through a decade-long study of neutrino interactions, at both Brookhaven Lab and Fermi National Accelerator Laboratory. These studies included the discovery of the charmed lambda—the first charmed baryon observed—and early measurements of neutrino electron elastic scattering and limits on neutrino oscillations. In recent years, Samios has joined Bill Marciano and Milind Diwan, also of the Lab's Physics Department, and collaborators at institutions around the world working to develop the Long Baseline Neutrino Experiment, a major component of the United States' future high-energy physics program to explore physics beyond the Standard Model.
"It's been a great run," Samios said. 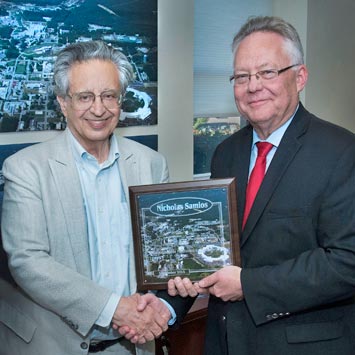 Samios earned a bachelor's degree in physics at Columbia University in 1953. Samios then completed his Ph.D. in physics at Columbia in 1957, working with mentor Jack Steinberger and Melvin Schwartz, who shared in Brookhaven Lab's fourth Nobel Prize-winning discovery. Samios first arrived at Brookhaven Lab as a summer student in 1952 and officially joined the Physics Department in 1959. He became an assistant physicist in the Physics Department in 1959, chair of the department in 1975, and the Lab's deputy director for high energy & nuclear physics in 1981. He began his 15-year tenure as lab director in 1982 and was named a distinguished senior scientist in 1997.

In 1998, Samios became Deputy Director of the RIKEN/BNL Research Center (RBRC) and in 2003 took on the role of RBRC Director, succeeding Nobel Laureate T.D. Lee, who shared in Brookhaven's first Nobel Prize-winning discovery. RBRC is a research center at Brookhaven funded primarily by the Japanese RIKEN Laboratory for researchers to develop physics theory and analyze data produced from particle collisions at RHIC. Samios also held the position of adjunct professor in Columbia’s Physics Department from 1970 to 1995.

Samios’ many honors include the 1980 E.O. Lawrence Memorial Award; the 1980 New York Academy of Sciences Award in Physical & Mathematical Sciences; the 1993 W.K.H. Panofsky Prize; the 2001 Bruno Pontecorvo Prize of the Joint Institute for Nuclear Research in Dubna, Russia; and the 2009 Gian Carlo Wick Gold Medal Award. He was elected to the National Academy of Sciences in 1982 and is a fellow of the American Physical Society, American Academy of Arts and Sciences, American Association for the Advancement of Science, and Akademia Athenon of Greece.