Remembering Those Who Have Borne the Battle 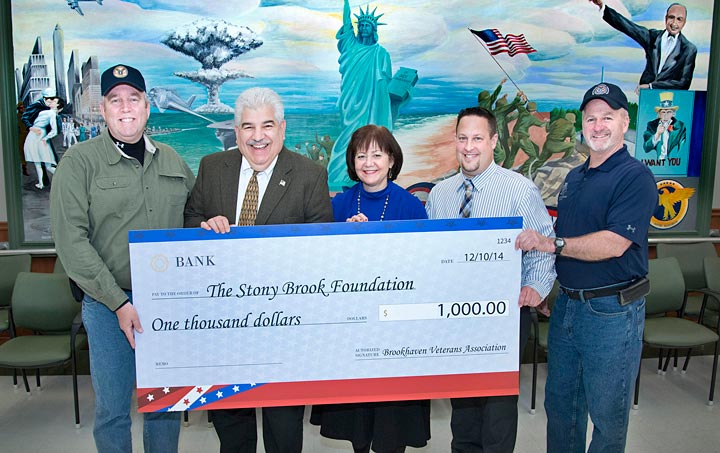 The Brookhaven Veterans Association (BVA) supports many activities to honor and assist veterans locally and across the nation, including the national AdoptaPlatoon program that supports our troops deployed overseas, the Boots on the Ground program, which works to raise awareness of the struggles that veterans and their families face each day, the on-site Memorial Day and Veterans Day ceremonies, Flag Day, and the annual 1-1-1 event to help homeless veterans.

“We should always honor and remember those who have borne the battle and protected our freedom.”

This year, the BVA took on a new mission — raising funds to increase the number of wreaths to be placed on gravesites at Calverton National Cemetery. The charge was part of the national “Wreaths Across America” program, an annual event in which wreaths are placed on gravesites of veterans at national cemeteries across the nation. The money raised by the BVA was specifically earmarked to purchase wreaths for Calverton, the largest national cemetery in our nation, located just a few miles from the Laboratory.

At the campaign kickoff in May, Brookhaven Science Associates donated $1500. The hard work of the BVA and its volunteers paid off in a huge way on this project with a grand total of $5648 raised!  These funds bought more than 500 wreaths, a significant contribution to the total number delivered to Calverton.

On Saturday, December 13, the day nationally acclaimed as Wreaths Across America Day, members and supporters of the BVA gathered with other community volunteers at Calverton to assist in placing the wreaths.  This year’s wreath placements were focused on World War I veterans, since 2014 marked the 100th anniversary of the start of that war.

“The total number of wreaths we have this year is over 2000, which is up significantly from last year’s total of 1000,” said Michael Picerno, director of Calverton National Cemetery to the crowd of volunteers that morning.  “This increase is in great part due to the efforts of our friends from Brookhaven Lab.  We greatly appreciate their hard work and hope to continue to partner with them and increase that number each year, as this is a great way to honor those who have served our nation.”

“This campaign surpassed our expectations,” said past BVA Commander Don Farnam, who works in the Lab’s Facilities and Operations Directorate.  “The support from the Lab community was overwhelming, and I was inspired by how many Lab employees and their families showed up on a chilly December day to help place the wreaths. I would be remiss if I didn’t thank fellow BVA member Michael Paquette, along with our core team members, Joanne Delles, Debbie Reynolds, Samantha Retenski, and Howard Hansen, who were certainly instrumental in the success of this project.” 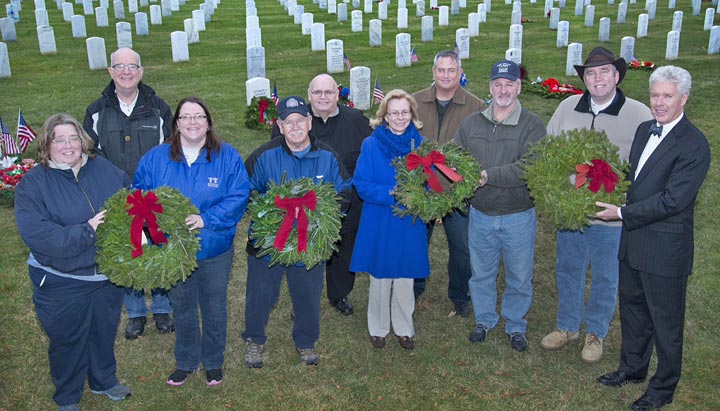 In addition to the Wreaths Across America campaign, Farnam and Paquette coordinated a chocolate sale that raised $1000. Those proceeds were donated to the Long Island State Veterans Home at Stony Brook (LISVH) and will be used by the home to host activities and “special menu nights” for the residents to enjoy Italian or Chinese cuisines, Reuben sandwiches, and even an occasional Big Mac from McDonalds.

“The residents look forward to those special meals,” said Fred Sganga, executive director at LISVH.  “The staff here does an amazing job of offering a variety of menus and activities to help make our residents feel comfortable and provide them the opportunity to socialize.  We hope to see some of the Lab’s veterans at our next special menu night, as I know that our residents would love to thank them personally for this very generous gift.”

The only veteran’s nursing home on a New York State campus, LISVH houses 350 fulltime residents and provides adult day health care for 40 veterans. An expansion of the adult day health care facility is currently underway. After a brief tour of the facility given by LISVH Associate Administrator Jonathan Spier, Farnam and Paquette visited the father of a retired Lab employee.

“That visit was the best way for us to spend a few minutes,” said Farnam. “He was as happy to see us as we were to see him. It was the least we could do for him and for our friend. We should always honor and remember those who have borne the battle and protected our freedom.”

According to Farnam, plans are already underway for next year’s campaign. “With the support of the BVA and Lab employees we hope to make another donation to LISVH and increase the number of wreaths we can purchase for Calverton. Based on this year’s results, I’m pretty sure we can make that happen.”

For more information on the BVA’s participation with Wreaths Across America or to volunteer, contact Don Farnam, Ext. 8648, farnam@bnl.gov.