Some of the daughters and sons of Brookhaven Lab employees, who got to see how their parents—and their parents' coworkers—keep the Lab operating and innovating during the annual Take Our Daughters and Sons to Work Day on April 9

Daughters and sons of Brookhaven Lab employees got to see how their parents—and their parents' coworkers—keep the Lab operating and innovating on April 9 for the 22nd annual Take Our Daughters and Sons to Work Day.

"The Laboratory is a really exciting place and I think it's fabulous that you get a chance to see what your parents do here every day. We're glad to host you," said Deputy Lab Director for Operations Jack Anderson, as he spoke about the importance of science and safety while welcoming 50 of the 10- to 14-year-olds invited to a special program organized by the Lab's Guest, User, Visitor (GUV) Center.

"We hope the daughters and sons who visited us had fun and enjoyed seeing how science comes to life at the Lab, where their parents come to work every day," said GUV Center Manager Kathleen Nasta.

Seeing a Solar Research Facility, Doing Some Research of Their Own 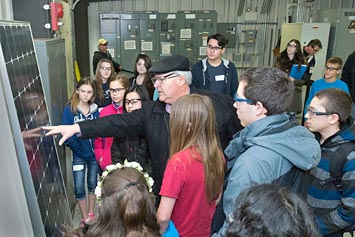 While on site, the Lab's guests visited the Northeast Solar Energy Research Center, where researchers from Brookhaven and other national labs, academia, and industry study new technologies for collecting and delivering clean energy from the sun, working to make solar "power plants" more efficient and economical. In the facility's control room, Renewable Energy Group Leader Bob Lofaro of the Sustainable Energy Technologies Department showed them a sample solar panel and the data acquisition system that monitors the solar array's performance and tells researchers how much power the array is generating. With clouds overhead that day, the system reported only about 24 kilowatts trickling in, compared to more than 400 kilowatts on a sunny day.

At the Science Learning Center, employees' daughters and sons did hands-on experiments to understand how Lab researchers are creating new materials and devices by exploring special properties at the nanoscale, a world of individual atoms and materials so small they are measured in billionths of a meter.

During one experiment, they spread a thin film of clear nail polish over a sheet of paper, and when ambient light hit the film, they saw a rainbow of colors from separated wavelengths—similar to researchers experimenting with different thin film coatings to optimize solar panel cells. They were also challenged to compare graphite and a material called graphene, which has many potential uses in new technology because of its flexibility, super strength, transparency, and ability to conduct electricity.

Before wrapping up their day at "work," the children were invited to Berkner Hall for the “Marvels of Motion” science show presented by Mad Science of Long Island.