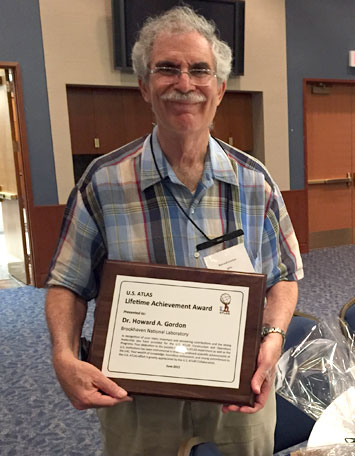 The discovery of the Higgs boson, the last predicted particle of the Standard Model of particle physics, and the recounting of the quest for that discovery in the award-winning movie Particle Fever brought tears to his eyes. But an award recognizing his contributions to one of the key Higgs-nabbing experiments had physicist Howard Gordon positively beaming.

Gordon, who works at the U.S. Department of Energy’s Brookhaven National Laboratory, has played pivotal roles in the construction and operation of the ATLAS experiment, one of two large particle detectors that discovered signs of the Higgs boson through careful analysis of energetic proton collisions at the Large Hadron Collider (LHC) at Europe’s CERN laboratory. On June 25, the U.S. ATLAS Collaboration honored Gordon with a U.S. ATLAS Lifetime Achievement Award at their annual workshop.

“It is wonderful to be appreciated by ones peers,” Gordon said. “Our U.S. ATLAS Collaboration has been a pleasure to work with over the last 20-plus years, with many significant physics results being published.

“It is also great to see so many strong younger people taking important roles in the experiment,” he added.

The ceremony, held at the University of Illinois, Urbana-Champaign—Gordon’s Ph.D. alma mater—represented a career come full-circle, as noted by Brookhaven physicist Srini Rajagopalan, who presented the award as the current Operations Program Manager for U.S. ATLAS.

“Howard, who graduated from U. Illinois in 1970, returned to this town 45 years later to be recognized for all his achievements,” Rajagopalan said. “No one deserves this award more than Howard, whose leadership has been instrumental in paving the way for U.S. students and scientists to be part of this exciting and epic scientific adventure.”

Rajagopalan presented Gordon with a plaque inscribed as follows:

In recognition of your many important and pioneering contributions and the strong leadership you have provided for the U.S. ATLAS Construction and Operations Programs. Your dedication to the success of both the ATLAS experiment as well as the U.S. institutions has been instrumental in enabling landmark scientific achievements at the LHC. Your wealth of knowledge, boundless enthusiasm, and strong commitment to the U.S. ATLAS effort is greatly appreciated by the U.S. ATLAS Collaboration.

Gordon is an experimental elementary particle physicist with expertise in hadron collider physics and detector development. He joined Brookhaven Lab in 1970, after receiving a Ph.D. in physics from the University of Illinois. He rose through the ranks, becoming a senior physicist in 1984, while performing experiments at Brookhaven, CERN, Fermi National Accelerator Laboratory (Fermilab), and SLAC National Accelerator Laboratory. From 1981-2000, Gordon was the leader of Brookhaven’s Omega Group, which built key parts of the DZero detector at Fermilab’s Tevatron collider.

Beginning in 1996, Gordon helped coordinate the design and construction of the ATLAS detector, and held several leadership positions within the U.S. branch of the ATLAS collaboration, including head of the U.S. ATLAS Project/Program Office (1996-2012), U.S. ATLAS Deputy Operations Program Manager (2002-2012), and ATLAS Collaboration Board Chair or Deputy Chair (2013-present). He oversaw both the nationwide- and Brookhaven Lab-specific efforts on ATLAS to maintain and operate the detector and provide the computing and physics-analysis support to enable U.S. physicists to make discoveries with the data. He credits the success of the ATLAS program and its discoveries to the strong collaboration among approximately 3,000 scientists, engineers, technical experts, and students from around the world who work on the experiment, including more than 700 from the United States.

Gordon regularly engages in outreach activities to help explain the significance of the research at ATLAS and the LHC and to introduce students to the tools and techniques of the field. “I particularly love giving talks to the crowds that visit Brookhaven for our Summer Sundays open house tours—August 2 for “Atom-Smashing Fun” this year—and for high-school students and teachers participating in our QuarkNet masterclass programs,” he said.

Deputy Chair of Brookhaven’s Physics Department since 2007, Gordon is also a fellow of the American Association for the Advancement of Science and the American Physical Society, and has served as the Chair of the Division of Particles and Fields for the latter. He has also served on several Department of Energy and National Science Foundation committees, including panel reviews and the High Energy Physics Advisory Panel (HEPAP).

Brookhaven’s role in the ATLAS experiment is supported by the DOE Office of Science (HEP).