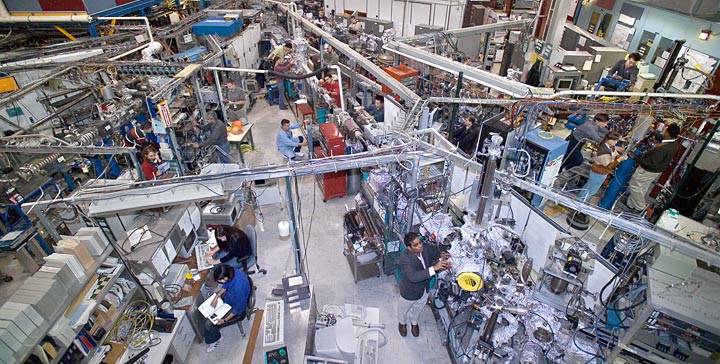 The experimental floor at the National Synchrotron Light Source before it closed and all equipment was removed.

When the National Synchrotron Light Source (NSLS) at the U.S. Department of Energy’s (DOE) Brookhaven National Laboratory shut down permanently in 2014, hundreds of pieces of equipment remained in the building, much of it still scientifically useful and valuable. Since then, many of these items have been re-purposed at its successor, NSLS-II — a DOE Office of Science User Facility — and at other facilities across the Lab site, saving millions of dollars for DOE and the Lab.

“The replacement value of all of the equipment and materials that was removed from NSLS and made available for use at other Brookhaven facilities and departments – in other words, how much we saved by not purchasing new items – is about $74 million,” said Diane Hatton, Director of the lab's Planning, Performance, and Quality Management Office.

The leftover pieces and parts are also being donated, recycled, or sold to other labs in the DOE complex. In fact, about 95 percent of the NSLS equipment will be reused in some way.

“We looked at all the remaining assets and saw tremendous value in them,” said Les Hill, the project manager in charge of decommissioning NSLS. “We couldn’t turn our eye on that golden opportunity to take what was left and get the maximum benefit out of it.”

According to Hill, the NSLS decommissioning was budgeted at $7.4 million. The Lab gained additional funds for the decommissioning efforts—more than $700,000—by recycling two million pounds of material, including more than 500,000 pounds of lead that had been used for shielding at NSLS.

“We saved hundreds of dumpsters of waste from going to a landfill,” said Hill. “It was a win-win from both an environmental standpoint and dollars-to-cents standpoint.”

A New Lease on Life

The recycling effort has been underway since the shutdown. Chambers, pumps, controllers, gate valves, flanges, optical cables, and power supplies from the NSLS beamlines and the accelerator have been salvaged by NSLS-II beamline scientists and other Brookhaven staff, including members of the Collider-Accelerator Department, the Chemistry Department, the Superconducting Magnet Division, and the Center for Functional Nanomaterials. Julian Adams, the manager of the Beamlines Developed for NSLS-II portfolio, is spearheading this effort.

Overall the value of recovered equipment intended for reuse at NSLS-II is $45 million. Adams spotlighted two key examples of re-used equipment that have made a large financial impact. The first is a pair of mirrors used to focus the x-ray beam, one flat and the other toroidal. Since they were purchased in the 1990s, the tools that measure mirror surface quality have improved, and technicians were surprised to find far lower slope errors on these mirrors than expected. The tests at NSLS revealed that the flat mirror was good enough to be used at NSLS-II, needing only a re-coating, and that the toroidal mirror was smooth enough that it could be improved with minimal effort and cost by differential coating.

“This tells us is that, even two decades ago, the polishing technology was incredible but the measurement tools weren't,” said Adams. “This was a welcome surprise for us, as the mirrors were going to beamlines that didn't need the flattest mirrors possible, and this saved Brookhaven the nearly $160,000 it would have cost to buy new ones.”

Another significant source of cost savings is an x-ray monochromator, a device used to narrow the range of wavelengths of light that make up the x-ray beam, which was taken from NSLS beamline X9 and installed at the NSLS-II Complex Materials Scattering beamline. It was converted from a “double crystal” to a “double multilayer” via the addition of new substrates and cooling mounts, for a cost of about $50,000. To purchase a new double multilayer monochromator, the cost would have been more than $600,000.

Equipment from the now-shuttered NSLS has also found a new home at other DOE facilities, including Argonne National Laboratory, which received two radio frequency cavities and beam transport magnets in January valued at $2.2 million. They will be used at the Advanced Photon Source in a test beamline set up to study and measure beam properties.

“We are very grateful that we have all of this equipment to help us construct the beamline,” said Alireza Nassiri, a senior scientist at Argonne, who will oversee the use of NSLS equipment at the new experimental setup at the Advanced Photon Source. “It can be very expensive to build an accelerator test beamline, so we have to take advantage of all available components.”

Operations at NSLS and NSLS-II are funded by the DOE Office of Science. Brookhaven National Laboratory is supported by the Office of Science of the U.S. Department of Energy. The Office of Science is the single largest supporter of basic research in the physical sciences in the United States, and is working to address some of the most pressing challenges of our time. For more information, please visit science.energy.gov.