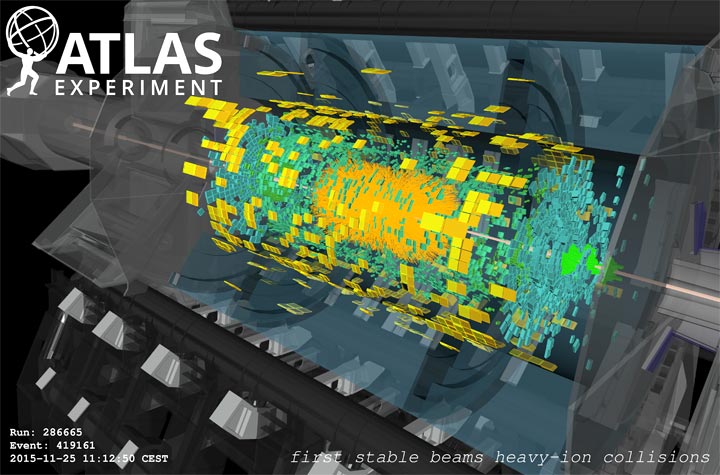 Particle tracks from a heavy ion collision in the ATLAS experiment at the Large Hadron Collider. (Image: ATLAS ©CERN)

“In the beginning there was nothing, which exploded.”
~ Terry Pratchett; author

For the next three weeks physicists at the Large Hadron Collider will cook up the oldest form of matter in the universe by switching their subatomic fodder from protons to lead ions.

Lead ions consist of 82 protons and 126 neutrons clumped into tight atomic nuclei. When smashed together at extremely high energies, lead ions transform into the universe’s most perfect super-fluid: the quark gluon plasma. Quark gluon plasma is the oldest form of matter in the universe; it is thought to have formed within microseconds of the big bang.

“We can produce a tiny sample of the nascent universe and study how it cooled and coalesced to make everything we see today.”

“The LHC can bring us back to that time,” says Rene Bellwied, a professor of physics at the University of Houston and a researcher on the ALICE experiment. “We can produce a tiny sample of the nascent universe and study how it cooled and coalesced to make everything we see today.”

“We expected to create matter that would behave like a gas, but it actually has properties that make it more like a liquid,” says Brookhaven physicist Peter Steinberg, who works on both RHIC and the ATLAS heavy ion program at the LHC. “And it’s not just any liquid; it’s a near perfect liquid, with a very uniform flow and almost no internal resistance." 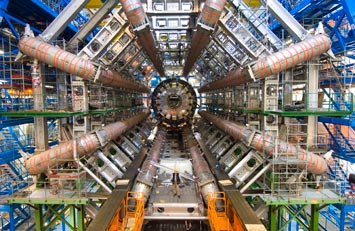 The ATLAS detector at the Large Hadron Collider (above) spends a few weeks each year colliding heavy ions in experiments that are complementary with those conducted at Brookhaven Lab's Relativistic Heavy Ion Collider (RHIC).

The LHC is famous for accelerating and colliding protons at the highest energies on Earth, but once a year physicists tweak its magnets and optimize its parameters for lead-lead or lead-proton collisions.

The lead ions are accelerated until each proton and neutron inside the nucleus has about 2.51 trillion electronvolts of energy. This might seem small compared to the 6.5 TeV protons that zoomed around the LHC ring during the summer. But because lead ions are so massive, they get a lot more bang for their buck.

“If protons were bowling balls, lead ions would be wrecking balls,” says Peter Jacobs, a scientist at Lawrence Berkeley National Laboratory working on the ALICE experiment. “When we collide them inside the LHC, the total energy generated is huge; reaching temperatures around 100,000 times hotter than the center of the sun. This is a state of matter we cannot make by just colliding two protons.”

Compared to the last round of LHC lead-lead collisions at the end of Run I, these collisions are nearly twice as energetic. New detector components, such a second calorimeter recently installed inside the ALICE experiment, will also give scientists a more encompassing picture of the nascent universe’s behavior and personality.

“The system will be hotter, so the quark gluon plasma will live longer and expand more,” Bellwied says. “This increases our chances of producing new types of matter and will enable us to study the plasma’s properties more in depth.”

Bellwied and his team are particularly interested in studying a heavy and metastable form of matter called strange matter. Strange matter is made up of clumps of quarks, much like the original colliding lead ions, but it contains at least one particularly heavy quark, called the strange quark.

“There are six quarks that exist in nature, but everything that is stable is made only out of the two lightest ones,” he says. “We want to see what other types of matter are possible. We know that matter containing strange quarks can exist, but how strange can we make it?”

Examining the composition, mass and stability of ‘strange’ matter could help illuminate how the early universe evolved and what role (if any) heavy quarks and metastable forms of matter played during its development.

The Department of Energy, Office of Science, and the National Science Foundation support this research and sponsor the US-led upgrades to the LHC detectors.

This story was originally published in Symmetry magazine.