Recalling Quark Matter '83 and the Birth of RHIC 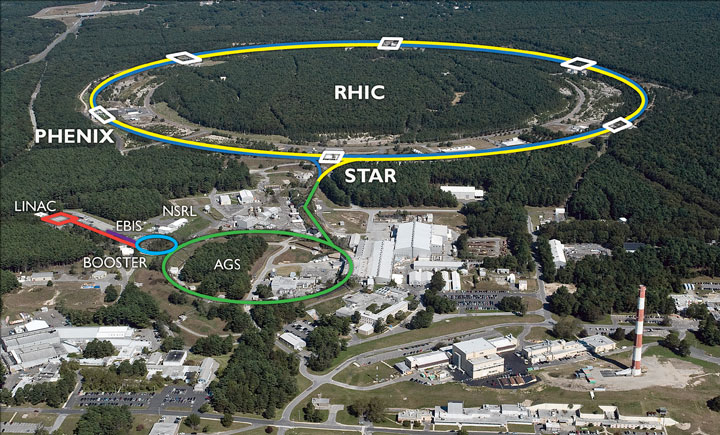 Editor's note: The Relativistic Heavy Ion Collider (RHIC) is now well into its second decade serving nuclear physicists from around the world as one of the premier user facilities operated by the U.S. Department of Energy (DOE) Office of Science. You probably know that nuclear physicists use RHIC to explore the most extreme forms of matter ever observed, including a substance called quark-gluon plasma that mimics the universe as it existed some 14 billion years ago. But do you know how RHIC came into being at Brookhaven National Laboratory? 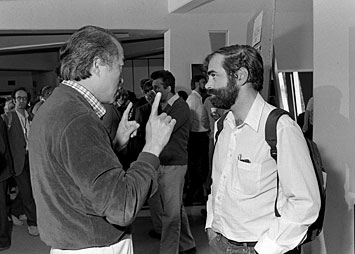 At last year’s Quark Matter 2015 conference in Kobe, Japan, the organizers highlighted the history of the field of quark matter physics, of which RHIC has been the centerpiece.  The birth of RHIC followed from an extraordinary sequence of events during the summer of 1983.  Former Brookhaven Lab Physics Department Chair Tom Ludlam took part in those events, and was asked to provide a brief retrospective for the proceedings of the Kobe meeting, recalling the seminal Quark Matter ’83 meeting, where a large community of nuclear and high energy physicists came together for the first time to examine the parameters for RHIC, setting the stage for the decades of discovery to follow. A longer version of this story, summarized below, is published in the proceedings for Quark Matter 2015. 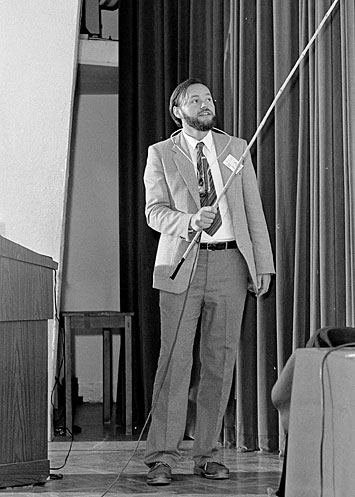 By the summer of 1983 quarks had only recently been established as real physical entities.  The theory of quantum chromodynamics (QCD) was becoming accepted as the framework for understanding quarks and gluons as the basis of strongly-interacting particles, such as protons and neutrons, and a small but growing number of both nuclear and particle physicists were developing the idea of utilizing very high energy collisions of heavy nuclei to create nuclear matter at such high energy density that the familiar structure consisting of protons and neutrons would give way to an extended quark-gluon plasma:  a QCD phase transition from nucleons to quark matter.  This was an exciting possibility for realizing a fundamentally new form of matter that could be equated with the state of the universe moments after the Big Bang.  Exploring this realm of nuclear collision energies was well beyond the capability any existing accelerator facility at the time.  In the meantime, the DOE-funded ISABELLE proton collider for high energy physics was under construction at BNL.  Some thought was given to introducing heavy ion beams into ISABELLE, which by the summer of 1983 had been re-named CBA (Colliding Beams Accelerator). 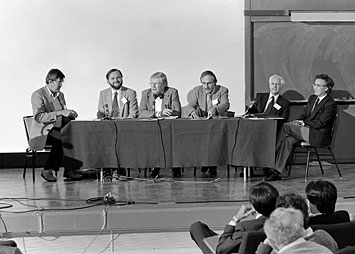 The spark that created RHIC was struck by two near-simultaneous events in July 1983.  The DOE High Energy Physics Advisory Panel (HEPAP) officially recommended the termination of the ISABELLE/CBA project, as the field moved on toward plans for a much higher energy machine, later to become the ill-fated Superconducting Super Collider, at a site in Texas.  Meanwhile, the DOE Nuclear Science Advisory Committee (NSAC) completed a Long Range Plan for U.S. nuclear physics, stating “We identify a relativistic heavy ion collider as the highest priority for the next major facility to be constructed, with the potential of addressing a new scientific frontier of fundamental importance.”

Brookhaven, led by Director Nick Samios, quickly began preparing a proposal for RHIC, utilizing the existing ISABELLE/CBA infrastructure.  An immediate challenge was to bring together a community of scientists capable of realizing such a machine and establishing an experimental program.  The Long Range Plan for nuclear physics had embraced an endeavor for which the accelerator technology and experimental techniques resided almost entirely in the realm of high energy physics, and in 1983 there was little in the way of communication or mutual undertakings between the two fields. 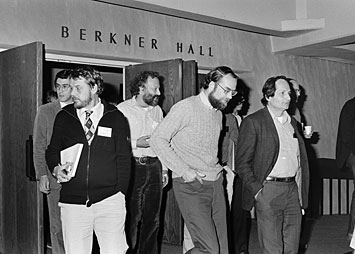 Brookhaven was scheduled to host the Quark Matter ’83 conference in September 1983.  Originally planned as a small, experts-only workshop, the meeting was extended to a full week and participation broadened to include both high energy and nuclear physicists in an organized discussion of the specific issues of initiating a new, dedicated accelerator facility.  Specific accelerator requirements were known only at the level of crude guesses.  The NSAC planning document of 1983 includes only hand-drawn cartoons of a nuclear phase diagram with a transition to quark matter. 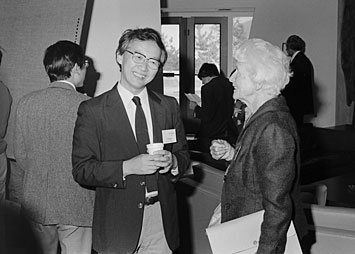 New data presented at the meeting included results from cosmic ray balloon flights and first data from colliding alpha particles at the Intersecting Storage Rings facility at the European CERN laboratory.  Both gave encouraging indications of increasing particle density, and hence energy density, with increasing energy and nuclear size of the colliding beams.  Of particular interest was an analysis of Fermilab data on the energy lost by high-energy proton beams striking lead nuclei.  These results indicated that higher energies than formerly estimated would be required to create the conditions for producing a quark-gluon plasma in heavy ion collisions.  In theoretical talks, lattice gauge theory and relativistic hydrodynamics showed promise for quantitative descriptions of the QCD phase transition and the evolution of hadronic matter in nuclear collsions.  The scientists agreed that finding observable signatures that would unambiguously identify a quark-gluon plasma in these collisions was going to be a challenge. 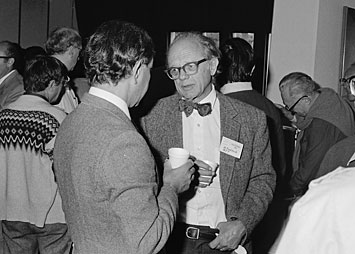 Herman Feshbach of MIT, one of the leaders in the field of nuclear physics at the time of the Quark Matter '83 meeting, talking with Brookhaven physicist Martin Blume.

The meeting culminated with a round-table discussion by a distinguished panel representing the nuclear and high energy communities in the U.S., Europe, and Japan.  The panel strongly supported BNL’s RHIC proposal for a collider with 100-billion-electron-volt (GeV) per nucleon beams.  The panelists agreed that the machine should have flexibility to collide a range of species from protons to heavy ions, over a wide range of collision energies.  They also noted the technical challenges for detectors implied by the complexity of final states, calling for measurement capability beyond what was then the state of the art. 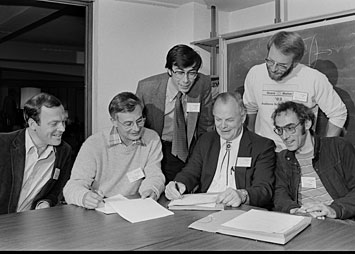 The Quark Matter ’83 meeting ended with a strong consensus among the participants regarding the essential parameters for a new machine, and general agreement that, as Arthur Schwarzchild, BNL Physics Chair at the time, put it, “The new physics calls for a marriage between nuclear and high energy physicists, and this conference looks like an engagement party to me.”

It would take another six years for the RHIC construction project to formally begin. The first man-made “ultra-relativistic nucleus-nucleus” collisions would not occur until the year 2000. Nonetheless, the era of quark matter physics was clearly established. 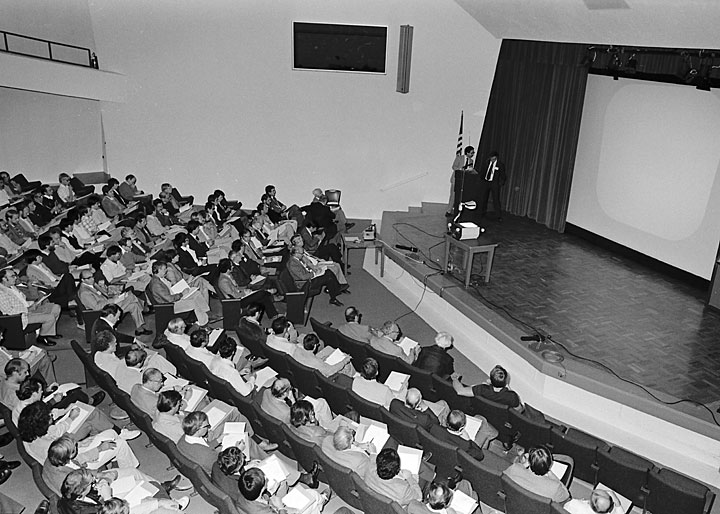 Nick Samios, then Director of Brookhaven National Laboratory, on the stage at the Quark Matter '83 conference.