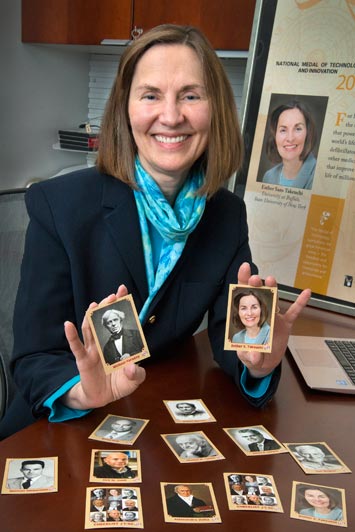 Esther Takeuchi shows off her scientist trading card collection, including one card featuring her as a prominent member of the Electrochemical Society.

Trading cards aren’t just for athletes anymore. Members of the Electrochemical Society (ECS) have compiled a deck of 50 cards featuring both historical and contemporary scientists, including Esther Takeuchi, chief scientist in the Energy Sciences Directorate at the U.S. Department of Energy’s (DOE) Brookhaven National Lab and a distinguished professor in the Department of Chemistry at Stony Brook University.

Takeuchi, a world-renowned battery expert, was featured in the deck as a “woman who changed ECS” because of her role as a president of the Society from 2011 to 2012.

“These cards say science is cool, collectable, and tradable,” said Takeuchi. “Science is not usually thought of in that context at all.”

The cards were first introduced at the ECS biannual conference in Phoenix, Arizona, in October 2015. Rob Gerth, director of Marketing and Digital Engagement at ECS, came up with the idea as a way to promote scientists.

“Regular people don’t know what electrochemists do, so we needed to come up with a way to make them more popular or interesting and known for what they do,” said Gerth.

The cards feature historical figures like Thomas Edison—who was one of the original members of ECS—as well as Michael Faraday and Herbert Dow. They also feature scientists who have contemporary significance, like those involved in the innovations of batteries and cell phones.

In addition to being a former president of ECS, Takeuchi holds more than 150 patents, the most of any woman in America. Her area of expertise is in energy storage and technology, and one of her biggest breakthroughs was inventing the compact lithium battery featured in implantable heart defibrillators.

Gerth says selecting scientists like Takeuchi for the first stack of cards was very challenging. He wanted to include prominent electrochemists that people can recognize for their inventions and advances that have impact on society.

“These aren’t only for the outside world, but for scientists as well,” said Gerth. “When you pass someone while walking down the hall, you might not be aware that they invented the hard drive for your computer. Scientists have a great impact on our everyday life, and this is just one way of getting to know them.”

Takeuchi is thrilled to have her own card and to continue trading. She would also like to see the idea of trading cards catch on among other scientific communities like the American Physical Society.

“I would love to see other societies motivated to have their own trading cards,” she said. “It’s a really neat way to connect with one another.”

Gerth said a new deck of scientist trading cards will be traded at the next ECS conference in San Diego, California, this spring.