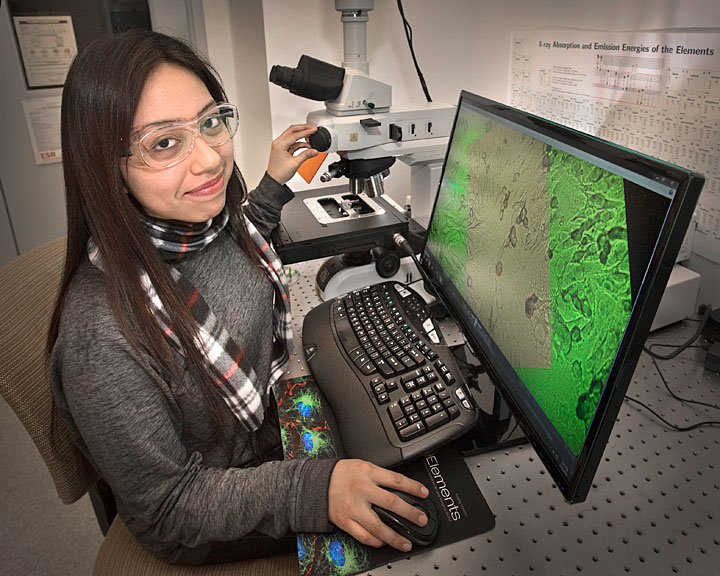 Cecilia Osorio, an intern with the Office of Educational Programs at Brookhaven National Laboratory, is developing ways to merge images taken with x-rays at NSLS-II with those made using conventional light microscopy.

Cecilia Osorio, a 20-year-old sophomore from California State University, Bakersfield (CSUB), and current intern with the Office of Educational Programs at the U.S. Department of Energy’s (DOE) Brookhaven National Laboratory, is tackling a significant software challenge at the National Synchrotron Light Source II (NSLS-II). This DOE Office of Science User Facility produces extremely bright x-rays and other forms of light to reveal intricate details of materials that make up batteries and solar films, the atomic structure of proteins, the chemical content of cells, and much more. But to make the most of the facility’s capabilities, scientists need a way to combine the data images that they collect so critical details are not lost.

Osorio is one of thirteen interns currently at Brookhaven as part of the Science Undergraduate Laboratory Internships (SULI) program sponsored by DOE’s Office of Science.  Her goal as a SULI intern is to find a way to precisely merge images collected with conventional light microscopes and those made using NSLS-II’s X-rays or infrared light, which will allow scientists to analyze the complementary data more effectively. Solving this problem by improving on the capabilities of data-merging software will make use of the specialized computing and mathematical skills Osorio has been learning for the past two years at CSUB.

“Solving complex problems has always been my motivation for everything,” she said.

Osorio grew up in Bakersfield, California, a lively city that has been expanding rapidly, just two hours north of Los Angeles. Her parents, both in the agricultural industry, moved from Mexico to Bakersfield before starting their family of six children to give them better opportunities in life. Osorio, the second youngest, has always taken her schooling very seriously—particularly science and math-based classes.  Her knowledge in math has often helped her parents with their finances, and in 5th grade, Osorio won first place in a science fair competition.

In her junior year of high school, Osorio joined Project Lead The Way, using her “free period” each day for an additional class in engineering. After two years of classes in biotechnical engineering and design and development, she had made up her mind to become a computer engineer.

“Computer engineering is very complex and it is a mixture of everything I like, from coding and physics to math and much more,” she said. “It reminds me of Sudoku puzzles; you are being challenged to think fast.”

Osorio is majoring in computer engineering and minoring in sociology at CSUB. She’s also a member of several on-campus clubs involving math, computer science, and engineering, as well as the National Society of Leadership and Success.

She interned at DOE’s Los Alamos National Laboratory during the summer of 2015, where she learned computer algorithms to analyze data images. That internship has helped her better understand the project she’s now working on at Brookhaven. Under the guidance of mentor Lisa Miller, program manager of imaging and microscopy at NSLS-II, she’s helping to develop ways to use imaging software for scientists’ needs.

Miller explains that when scientists gather data images at one of the NSLS-II X-ray or infrared microscopes, it can be difficult to combine this information with an image of the same specimen made using a conventional light microscope. To get the most benefit out of the data, these images—taken with different pixel sizes and resolutions (from millimeters to nanometers)—need to be precisely overlapped and correlated. But the existing software has trouble locating the similarities in the images using its pattern recognition functions, and is unable to properly align the images.

Scientists often resort to overlapping their many images manually, using programs such as Adobe Photoshop. Their other option is to analyze images individually without knowing how detailed information between the images corresponds.

“We can get beautiful X-ray and infrared images with NSLS-II,” said Miller, who uses these techniques to pinpoint toxic copper ions in protein aggregates associated with Alzheimer’s disease. “If we can’t precisely overlap the visible, infrared, and X-ray images and say ‘there is this much copper in the cell membrane vs. the nucleus vs. the cytoplasm’ we won’t be able to understand the elemental make-up that is crucial to creating new drugs or combatting disease.”

Osorio’s task is to develop the image-analyzing software by digitally placing markers on the image that act as pins on a grid. The software will then be able to align the markers to accurately overlap the images no matter what type of light or pixel size was used.

“I’m thrilled to be working on this project,” Osorio said. “I strongly believe I can find a way to identify a system of markers for correlating visible-light images with X-ray and infrared microscopy images and be able to overlap them.”

Once the program works, it will be able to assist all scientists using the microscopes at NSLS-II, including biologists, physicists, and chemists.

For example, solving the data-merging problem would also help scientists trying to monitor the chemical makeup and structural changes in lithium ion batteries that can cause them to fail after repeated use; those seeking to understand how certain plants take up iron through their roots allowing them to grow in nutrient-poor soils; and even those who use imaging technologies to determine if certain pigments in a painting can identify it as a forgery.

“We have users at NSLS-II collecting X-ray images of their samples without being able to compare them to what their eyes can see,” said Miller. “You get powerful data, but without this analysis, it’s much less useful. We’re eager to get this going, because I can see how excited the users are when they come here and we are able to give them these capabilities.”

After Brookhaven, Osorio plans to continue her education straight through to her Ph.D. She is intrigued by technology and the wide range of areas she could expertise in, such as robotics, neural computing for specialized operations, and software and hardware technology. Her ultimate goal is to develop more efficient technology, and motivate other young women to achieve success in their careers.

“It’s really important to me that I succeed and become a role model for young girls who want to pursue a degree in engineering because it is tough being a minority in this field,” she said.

The software program being used is known as Fiji, a plug-in feature for ImageJ. ImageJ is funded by the National Institutes of Health. The light microscope and other instrumentation are funded by a NIH Biomedical Technology Research Resource grant P41GM103473. Osorio’s project is part of a larger effort funded by the DOE’s Office of Biological and Environmental Research (BER).

The National Synchrotron Light Source-II and Brookhaven National Laboratory are supported by the Office of Science of the U.S. Department of Energy.  The Office of Science is the single largest supporter of basic research in the physical sciences in the United States, and is working to address some of the most pressing challenges of our time.  For more information, please visit science.energy.gov.