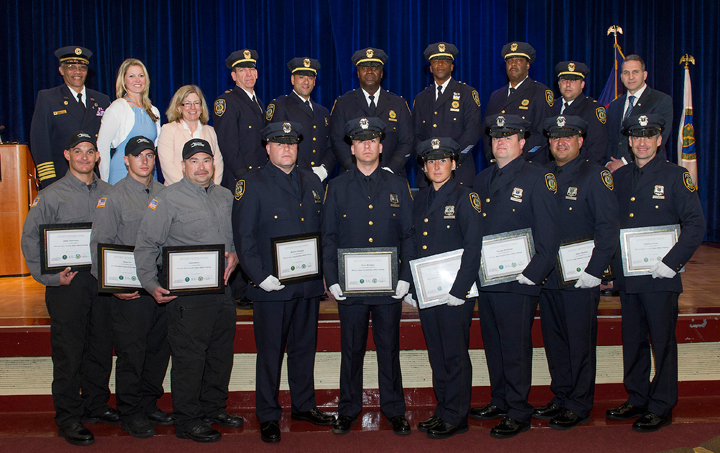 At a ceremony held on Friday, June 3, the Laboratory Protection Division (LPD) welcomed six newly trained security police officers (SPOs) to the Lab’s police group.  In total, 11 officers received their graduation certificates — the six new recruits plus two officers, Theresa Eobstel and Howard (Chad) Reed, who completed their training in September 2015 but weren’t yet formally recognized at a ceremony, and three officers from the West Valley Demonstration Project (a U.S. Department of Energy site in West Valley, NY) who received their training here at the Lab. The six new recruits are now officially part of Brookhaven’s LPD. The ceremony included recognition of the promotion of two officers:  Jules Martinez was promoted to training lieutenant and Chris Micallef was promoted to shift lieutenant.

The ceremony opened with the posting of the United States and U.S. Department of Energy flags by Brookhaven Veterans Association members Donald Farnam, Michael Paquette, and Dennis Ryan, followed by the singing of the national anthem by Debbie Snyder of the Biology Department and an invocation by James Vaz of the Utilities Division.

John Carney, manager of LPD, welcomed Laboratory staff, family members, and friends.  “We have an impressive group of security police officers here at the Lab and it is my pleasure to recognize our two newly promoted officers and our new graduates,” said Carney. “I am very proud of the hard work and the accomplishments by everyone in LPD. It is true that when we strive for perfection we achieve greatness.”

Associate Laboratory Director for Facilities and Operations, Amy Nunziata, echoed Carney’s sentiments and addressed the officers. “You are the first person that our employees, guests, and visitors see when they arrive, which means you are the face of the Lab,” said Nunziata. “That is an important job. Never forget that you are a key component to maintaining our safety and enabling the science that we do here, which impacts our nation and the world. You are a highly qualified and impressive group and we are happy to have you here at the Lab.”

Lieutenants Martinez and Rudder gave a brief overview of the training requirements, which include firearms and tactics, intermediate force, physical fitness, and classroom training, before presenting each graduate with their completion certificates.

The new officers hold impressive and diverse resumes that include college degrees in criminal justice and psychology, as well as experience in the New York City Police Department, federal, state, and local correctional facilities, private sector security, and active military service in the United States Army, Marines, Navy, and the Army National Guard. “I’m going to miss being here at the Lab,” said new officer Ryan Lee of the West Valley Demonstration Project. “I think the partnership between West Valley and the Lab worked out perfectly. The training program here is excellent and although I am returning to West Valley, I will miss all of the friends I made here over the past eight weeks.”

“I am retired from the Suffolk County Police Department where I worked with outstanding officers and staff,” added Thomas McDonald, whose family members have served as policemen, policewomen, or detectives for four generations. “The training instructors here at the Lab are among the best I have ever met and I look forward to my new career at the Lab.”

The ceremony closed on a traditional note with Chris Caccavale of the Staff Services Division playing the bagpipes.

The new officers will start on-the-job training on their assigned shifts on June 13.

Please see below for photos and a short biography of each new security police officer. 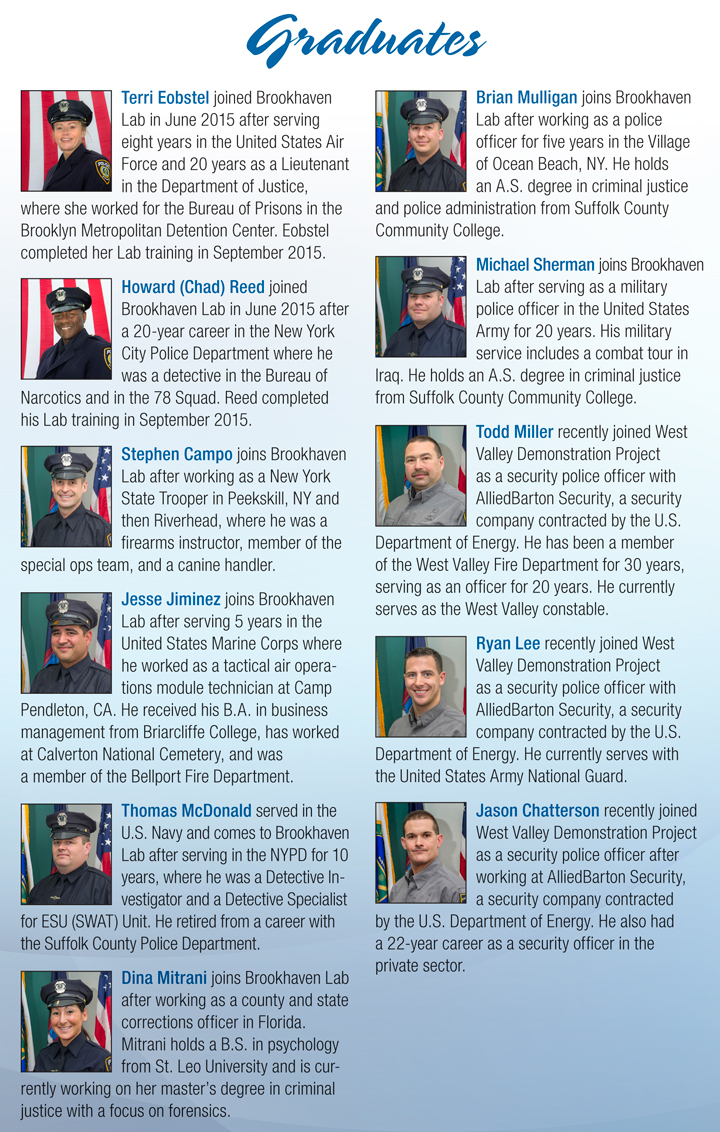