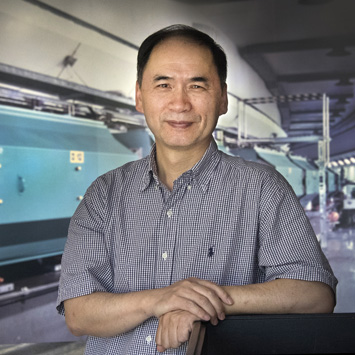 Haixin Huang, a physicist in Brookhaven Lab's Collider-Accelerator Department, was awarded tenure for his achievements in the field of accelerator science—specifically for his leadership in preserving spin polarization through the Lab's chain of accelerators and for polarimetry improvements at the Relativistic Heavy Ion Collider (RHIC).

“In the past two decades, Haixin has made outstanding scientific contributions to the world-leading performance of the Relativistic Heavy Ion Collider complex,” said Collider-Accelerator Department Chair Thomas Roser. “He keeps his eye on the ball and gets things done fast and well.”

At the Alternating Gradient Synchrotron (AGS), Huang’s contributions were essential for developing and commissioning the solenoidal partial Siberian snake that modifies the number of spin precessions per revolution and cures imperfection resonances. This instrument enabled the AGS to achieve 35–40 percent polarization levels at 25 giga-electron volts and set a world record in 2004. Huang also led efforts to commission a system with two partial snakes to achieve proton polarization up to 70 percent and, again, set a world record in 2012.

In his current role as an injector group leader and "keeper of heavy ions" for the injectors, Huang balances available resources to maximize machine performance.

Huang earned his Ph.D. from Indiana University in 1995. He became a research associate at Brookhaven Lab in 1995, an assistant physicist in 1997, associate physicist in 1999, and physicist in 2001. He was run coordinator for RHIC's polarized proton operations in 2003 and 2011. Huang received the prestigious Faraday Cup Award in 2006 for the polarimeter design that led to world-record polarization levels at RHIC.