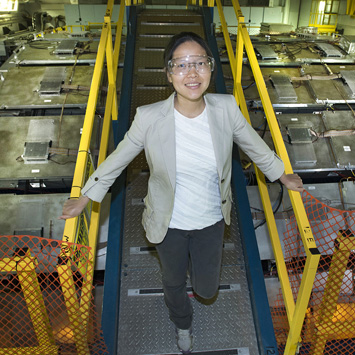 Lijuan Ruan, a physicist in Brookhaven Lab’s Physics Department, was awarded tenure for her seminal contributions to the study of the quark-gluon plasma (QGP) created in heavy ion collisions at the Relativistic Heavy Ion Collider (RHIC). She has played a leadership role in the development and construction of detector systems that have pushed RHIC’s STAR experiment far beyond its original design to make world-leading measurements essential for understanding behavior of the QGP.

“Lijuan is one of the most outstanding heavy ion experimental physicists at Brookhaven Lab,” said Physics Department Chair Laurence Littenberg. “Her expertise spans the full range of experimental techniques, from the lowest level of the underlying hardware through to the most advanced analysis procedures, making her an extraordinarily strong asset for Brookhaven’s stewardship of the experimental program at RHIC.”

Ruan has performed forefront research on the production and transport of energetic particles in the QGP. Her work furthered scientists’ understanding of particle production in a momentum range dominated by multiple quark-gluon interactions. She pioneered inherently difficult measurements related to “chiral symmetry restoration” and the production of low-mass dileptons. She helped build STAR’s large acceptance time-of-flight system and led the design and installation of the Muon Telescope Detector.

Ruan earned her Ph.D. from the University of Science and Technology of China in 2005. As a postdoc at Lawrence Berkeley National Laboratory, she continued the work for which she earned her Ph.D. as a member of STAR. She received a Goldhaber Fellowship at Brookhaven Lab in 2007, was promoted to associate physicist in 2010, and physicist in 2012. In 2010, she received the Young Scientist in Nuclear Physics Award from the International Union of Pure and Applied Physics, and in 2013 she was the first Brookhaven Lab nuclear physicist to receive a DOE Early Career Award. A principal author on many of STAR’s scientific publications, she has also published numerous papers on detector development and given nine major invited plenary talks at international conferences.