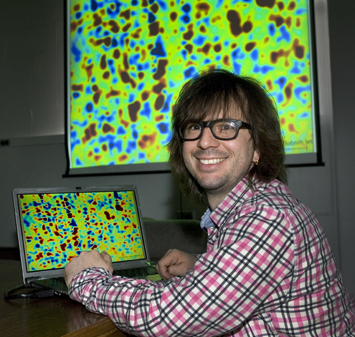 Anže Slosar, one of the rising stars in the field of cosmology, was awarded tenure for his significant achievements within the Physics Department at Brookhaven Lab. His work has enabled the study of key problems of fundamental physics, including the nature of dark energy and the curvature of space.

“Anže is widely regarded as one of the leading young cosmologists in the world,” said Physics Department Chair Laurence Littenberg. “Very soon after his arrival at Brookhaven, we recognized his remarkable ability as a communicator and his command of the field.”

Slosar created a technique to detect an acoustic peak in sound waves traveling through the early universe. These waves create fluctuations in the density of ordinary matter, called the Baryon Acoustic Oscillation (BAO), which can be used as a standard ruler to determine the expansion history of the universe at very large distances. Slosar analyzed data from the Baryon Oscillation Spectroscopic Survey (BOSS) and revealed three-dimensional structures in the early universe by measuring the shadows cast by intervening hydrogen gas clouds on the spectra of quasars. Slosar now works on the Large Synoptic Survey Telescope, the flagship DOE cosmology experiment for which Brookhaven is building sensor modules. He is also working on a completely new technique using radio wave observations to map the universe.

In 2011, Slosar won the first DOE Early Career Award awarded to a scientist in Brookhaven’s Physics Department, and in 2012, he was named one of Popular Science’s “Brilliant 10,” an annual list of the 10 most exciting and innovative young scientists.