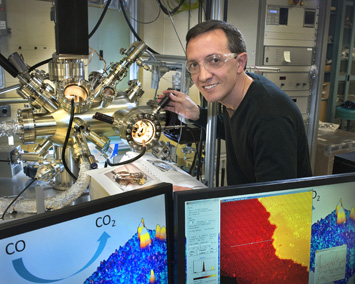 Darío Stacchiola, a chemist at Brookhaven Lab, was granted tenure for his significant contributions to catalysis science, through improving understanding of atomic structure and function of catalyst active sites, particularly through in situ studies of model oxide catalysts. Stacchiola was a member of the Lab's Chemistry Division at the time he was granted tenure, and in February 2016 moved to the Center for Functional Nanomaterials (CFN), where he now leads the Interface Science and Catalysis group.

"Darío led a new thrust to provide atomic and molecular level descriptions of catalytic surfaces," said Chemistry Division Chair Alex Harris. "He has developed an international reputation and demonstrated the breadth and drive for sustained contributions to future in situ catalysis science. He is a key member of the Lab's catalysis effort. He will now be leading the development of new catalysis science capabilities at the CFN and we look forward to working with him in his new role."

Catalysts increase the rate of chemical reactions and Stacchiola's work led to the discovery of high-activity catalysts, based on inexpensive materials, that show unprecedented activity at oxide-oxide and metal-oxide interfaces. His research and methods to study metal oxide catalysts have been applied for energy conversion and fuel synthesis reactions.

In Stacchiola's ongoing pursuit to improve understanding of the atomic structure and function of catalysts' active sites, he has developed and applied a set of in situ instruments for real time, step-by-step views of catalysts in action at the atomic level. He commissioned an ambient pressure scanning tunneling microscope system and collaborated with the CFN to exploit an ambient pressure x-ray photoelectron spectroscopy instrument, which has been moved from the National Synchrotron Light Source (NSLS) to NSLS-II.

Stacchiola earned a Ph.D. in physical chemistry at the University of Wisconsin-Milwaukee in 2002 and a bachelor's degree in physics at the Universidad Nacional de San Luis in Argentina in 1996. He was named a Humboldt Research Fellow for postdoctoral research at the Fritz Haber Institute of the Max-Planck Society in Germany from 2005 to 2007. He arrived at Brookhaven Lab in 2007 as a research associate and took a one-year position as an assistant professor in the Chemistry Department at Michigan Technological University in 2009. He returned to Brookhaven in 2010 and was a member of the Catalysis Reactivity and Structure group until 2016, when he joined the CFN's Interface Science and Catalysis group.