Rebecca Siddall is a high school student from Oundle, UK, who spent her summer in Brookhaven Lab’s High School Research Program learning about physics from members of the STAR collaboration at the Relativistic Heavy Ion Collider (RHIC). A version of this article originally appeared on the STAR*lite website.

Simple Math, Antimatter, and the Birth of the Universe

If x2 = 4, then what is x? Did you just think “2”? Is that correct? Well, yes and no. The fact that there is a parallel but equally valid answer that x is negative 2 has been a difficult and intriguing conundrum to everyone who comes across it. But this concept can be applied to far more than simple algebra. It can be applied to one of the most confusing areas of science—antimatter, an odd sort of “opposite” to the stuff that makes up our ordinary world.

Paul Dirac was the first to conceive the idea of antimatter, using exactly the same reasoning. He had written an equation that explained an electron’s spin. However, he realized that it had two possible answers: one for positive energy, one for negative energy. This amazing leap of imagination and theory is the foundation for today’s study of antimatter, where particles have the same mass as ordinary matter particles, but opposing properties such as opposite charge.

The physicist Freeman Dyson said of Dirac: “His discoveries were like exquisitely carved statues falling out of the sky, one after another. He seemed to be able to conjure laws of nature from pure thought.”

The above quotation demonstrates the compelling beauty of particle physics—the endless frontier between what is known and what is unknown constantly being pushed back by scientists at the center of it all, studying physics by seemingly defying physics.

And that is exactly what the physicists and engineers of STAR (Solenoidal Tracker At RHIC) are doing. RHIC (the Relativistic Heavy Ion Collider, a particle collider at Brookhaven National Laboratory in the U.S.) accelerates gold ions to almost the speed of light before allowing them to collide with one another. The subatomic interactions in these collisions produce a fountain of rare particles—including particles of antimatter—revealing hints of what matter looked like at the dawn of time. That’s right: In a particle detector in a building in a laboratory on Long Island, New York, USA, whose matter was formed 13.82 billion years ago in the Big Bang, we see 13.82 billion years into the past, just a few microseconds after the Universe began. 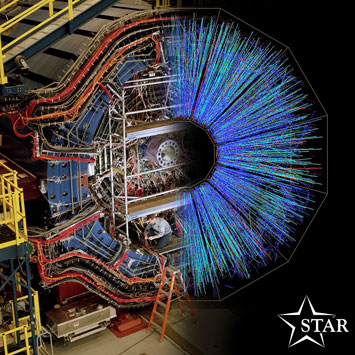 The temperature of the matter created in these collisions is approximately 7.2 trillion degrees Fahrenheit, which earned RHIC a Guinness World Record for the hottest man-made temperature ever (until surpassed by temperatures recorded at the Large Hadron Collider). This in itself is mind-blowing, and I haven’t even explained what is so special about this matter.

When the collision occurs, the energy released is so great that the “quarks” and “gluons” that make up individual protons and neutrons are released, creating a quark-gluon plasma (QGP). Quarks are the fundamental building blocks of matter, with six types known as “flavors”: up, down, charm, strange, top and bottom. Gluons are the particles that hold (“glue”) the magically named quarks together.

The liquid-like QGP is a furnace for particle creation. As the fireball cools, the quarks and gluons recombine to form larger particles. Some of these have not existed in our universe since its birth.

The very next year brought another antimatter discovery in the form of antihelium-4, the heaviest antimatter nucleus ever detected (another world first for STAR)! It is amazing considering that it is created in the midst of rapidly expanding matter created at trillions of degrees and surviving for only ten trillionths of a trillionth of a second. Not to mention the fact that each nucleus is approximately 10 million billion times lighter than a grain of sand.

Ordinarily, when matter and antimatter come into contact with one another, they annihilate leaving only a burst of energy. So creating and then locating antihelium-4 is beyond looking for a needle in a haystack. It’s like looking for the needle when it no longer exists. And yet 18 elusive antihelium-4 particles were found in the STAR detector—eliminating the possibility of an error. STAR is likely to keep the record for creating the heaviest antimatter nucleus for a while since the next stable antimatter nucleus, antilithium-6, is 50 percent more massive and a million times more rare.

In collisions performed by scientists, matter and antimatter are always produced in equal amounts. The same is thought to have happened in the Big Bang. However, today we live in a universe consisting almost entirely of matter. If the two annihilate when they come into contact, how can this be?

One current hypothesis is that there is a hidden asymmetry, or difference of behavior, between the two. Finding this matter/antimatter asymmetry would be a pivotal discovery—it is the El Dorado of modern physics. This ongoing search of the unknown for the unknown is a fascinating one. And perhaps there will soon be one less unknown, if we continue to recreate the conditions at the beginning of our universe in an attempt to discover how it all began.

Research at RHIC is funded primarily by the U.S. Department of Energy Office of Science.