NOTE TO EDITORS: This press release describes a talk being given by a scientist from the U.S. Department of Energy's Brookhaven National Laboratory at the March 2004 meeting of the American Physical Society, taking place March 22-26 at the Palais de Congres, Montreal, Canada (http://www.aps.org/meet/MAR04/). This information is embargoed for release at the time of the talk.

Studying 3-D Materials in One Dimension

MONTREAL, CANADA -Research by Young-June Kim, a physicist at the U.S. Department of Energy's Brookhaven National Laboratory, may help determine how a class of materials already used in electronic circuits could be used in optical, or light-based, circuits, which could replace standard electrical circuits in telecommunications, computer networking, and other areas of technology. 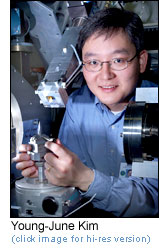 Kim's research is focused on "quasi one-dimensional" cuprates, materials that contain copper and oxygen where the atoms are tightly linked together in straight chains with weak lateral bonds - like a ladder with steel rails and paper rungs. Because the materials' properties are mainly determined by the one-dimensional "rails," this structure allows scientists to simplify their analysis by ignoring the weak "rungs."

Kim wants to know how the electrons in these "quasi one-dimensional" cuprates respond to x-rays - how the electrons behave when they are excited, or energized, by the light. An electron, he said, is like a ball of negative charge surrounded by an electric field, and also like a bar magnet with a tiny magnetic field. Both fields affect nearby electrons, normally at the same time. However, in Kim's studies, when an electron in a quasi one-dimensional cuprate absorbs x-ray energy, the fields separate, allowing the electric field to "speed up" and exert force on other electrons before the magnetic field can reach them.

"This response is unique to quasi one-dimensional materials," Kim said.

Kim will give a talk on this work during the "Excitations in Strongly Correlated Materials I" session at 8:36 a.m. on Friday, March 26, in room 517A. The research is funded by the U.S. Department of Energy's Office of Basic Energy Sciences within the Office of Science.