A research team including Huilin Li, now a scientist at the U.S. Department of Energy's Brookhaven National Laboratory, has discovered the mechanism of epothilone A (EpoA), a next-generation cancer treatment. Now in Phase III clinical trials, EpoA may avoid many of the problems associated with paclitaxel (Taxol), the widely used chemotherapeutic agent, which acts in a similar way. Understanding these mechanisms may help drug designers create even more effective drugs.

The team's findings, based on work done while Li was a scientist at Lawrence Berkeley National Laboratory, in conjunction with researchers at Emory University, are published in the August 6, 2004 Science. The work was led by Ken Downing of Berkeley Lab (see press release, below). Li, who joined Brookhaven Lab in 2002, continues his collaboration, and is co-inventor on a patent application that has been filed based on this work.

BERKELEY, CA - Pharmaceutical companies seeking to design more effective cancer chemotherapy agents have an easier road ahead than was previously believed. A team of researchers, led by a scientist with the U.S. Department of Energy_s Lawrence Berkeley National Laboratory (Berkeley Lab), has shown that two of the most promising anticancer drug families, the taxanes, which include Taxol™, and the epothilones, have their own unique and independent mechanisms for combating the spread of tumors. This revelation provides drug designers with a great deal more flexibility in synthesizing new and improved forms of each. 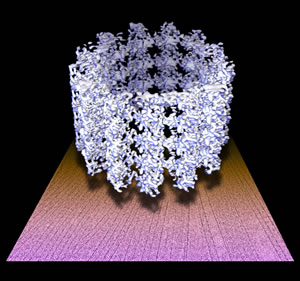 "What our findings have done is to give drug designers more options," says Kenneth Downing, a biophysicist with Berkeley Lab_s Life Sciences Division, who was the principal investigator for this study. "Nature has provided more than one way for these anticancer drugs to take action, which should make the job of the chemists attempting to synthesize novel analogues of these drugs easier."

Working with Downing on this study were Huilin Li, now with DOE_s Brookhaven National Laboratory; James Nettles, Ben Cornett, and James Snyder of Emory University; and Joseph Krahn of the National Institute of Environmental Health Sciences. The results of their research appear in the August 6, 2004, issue of the journal Science.

Downing and his collaborators made their determinations after producing the first-ever three-dimensional, atomic-scale images of the binding site where one of the epothilones interacts with a protein that is crucial to a number of vital cell functions, including mitosis (cell division). This protein, called tubulin, is the major constituent of microtubules, hollow cylinders that serve as a skeletal system for cells.

For a cell to divide, the microtubule skeleton must first disassemble, then reform into spindles across which duplicate sets of DNA material line up, and then disassemble once more and reform into skeletal systems for the two new cells. The flexibility of the tubulin protein, coupled with a number of cellular regulators, enables microtubules to shift through these various formations.

"By binding to tubulin, epothilone acts as a microtubule stabilizer," says Downing. "When an epothilone molecule binds to tubulin, the protein loses its flexibility and the microtubules can no longer disassemble. That means cell division stops."

Since cancer is the result of cell division run amok, it has long been recognized in the field of medical research that microtubule stabilizers could prove valuable as cancer chemotherapy agents.

Taxanes are also microtubule stabilizers that bind with tubulin. Already Taxol, a natural substance found only in the bark of the Pacific yew tree, has been shown in clinical practice to be an effective treatment for a number of cancers including ovarian, breast, and lung. However, Taxol has a number of unpleasant side effects on patients, and treatment for recurrent cancers is often unsucccessful.

Because taxanes and epothilones are both microtubule stabilizers, it has been believed that a tubulin binding site called a pharmacophore, common to both families and with a specific set of chemical characteristics, could be found. This would be the route through which safer and more effective artificial forms of the taxanes, epothilones, and other natural anticancer compounds could be synthesized.

Through a combination of electron crystallography, nuclear magnetic resonance (NMR) spectroscopy, and molecular modeling, Downing and his collaborators were able to create a high-resolution, 3-D structural model of the site where the epothilone EpoA binds with tubulin. Much of this data was collected by Huilin Li of BNL_s Department of Biology, who describes the challenges posed by the research.

"Using electron crystallography, we obtained the high-resolution electron density map, and were clearly able to localize the drug inside the protein density," Li says. "However, because of the relatively small size of EpoA (200 daltons) compared to the tubulin protein upon which it binds (100,000 daltons) - and the flexible nature of the drug structure - we had a hard time nailing down an exact binding structure for the drug. That_s where the computational chemists at Emory University stepped in. They used computer modeling to come up with a drug structure that fit the observed density map."

In an earlier study, Downing and another group of colleagues had produced a similar model of the tubulin binding site of Taxol. When the two models were compared, it was revealed that tubulin possesses what is called a "promiscuous binding pocket." This means that several different compounds are able to bind at the same site through different chemical mechanisms.

Explains Downing, "Whereas Taxol and EpoA bind in the same region of the protein, the idea of the common pharmacophore doesn_t apply, because they bind in such different ways."

Downing and his collaborators have collected similar data on compounds from other microtubule stabilizers that share the same tubulin binding site as the taxanes and epothilones, and are now putting together 3-D structural models of them. The expectation is that these compounds will also have their own unique mechanism for interacting with tubulin.

"Our ultimate goal is to identify all of the different mechanisms that nature uses to stabilize tubulin activity and block mitosis," Downing says. "Ideally, chemists will be able to use our data to develop improved anticancer drugs."