May serve as new target for antiviral drugs

UPTON, NY - Scientists at the U.S. Department of Energy's Brookhaven National Laboratory and the Albert Einstein College of Medicine have produced the first molecular-scale images of DNA binding to an adenovirus enzyme - a step they believe is essential for the virus to cause infection. The images, which appear on the cover of the October 2004 issue of Molecular and Cellular Proteomics, show how binding to DNA may stimulate the enzyme and are already being used to design new antiviral drugs to block this interaction. 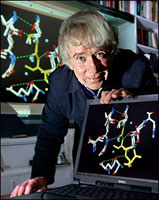 "We were quite surprised to see that DNA actually stimulated the activity of the enzyme," said Brookhaven biologist Walter Mangel, a co-author on the paper. "If we can block this interaction, we should be able to prevent the virus from replicating, and thereby thwart infection."

Adenoviruses cause respiratory, gastrointestinal, and eye infections, including highly contagious viral pink eye. Some adenovirus eye infections lead to blindness. Respiratory epidemics of adenovirus are often prevalent on army bases. And in patients with compromised immune systems, such as those infected with human immunodeficiency virus (HIV), an opportunistic adenovirus infection can be deadly.

During infection, adenovirus makes an enzyme called a protease, which cleaves or degrades viral "scaffolding" proteins to complete the maturation of newly synthesized virus particles. Mangel and others have been working to understand all the steps necessary for this enzyme's function, looking for new ways to stop its action and, therefore, block an adenovirus infection (see: http://www.bnl.gov/discover/Spring_04/anti_viral_1.asp ).

The scientists didn't expect the viral DNA to bind to the protease, but they figured they should look just to rule out such an interaction. "It was something we had to do, to make sure they did not interact," Mangel said. The discovery that the viral DNA interacts with the protease was unprecedented and led them to characterize the interaction in detail. The scientists now believe that inside the virus particle the protease uses the DNA as a guide wire, sliding along the genetic material to remove the internal "scaffolding" proteins, all located near the DNA. 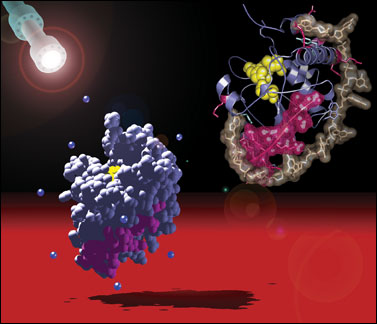 Two views of the adenovirus protease, an enzyme required for viral replication. DNA, depicted by the white "sticks," is shown binding to the enzyme on the right. Drugs that prevent the DNA from binding should prevent the virus from replicating and stop an infection. (Click image to download 300-dpi hi-res version.)

The team used a technique called synchrotron footprinting, which was pioneered by paper co-author Mark Chance and his colleagues at the Albert Einstein College of Medicine, to show where DNA binds on the adenovirus protease.

"Synchrotron footprinting is a technique recently developed at Einstein that allows structural information on the contacting surfaces of biological molecules to be precisely mapped. These contact points are regions providing critical communication in the cell," Chance explained. "In this study the footprinting approach provided information on the DNA binding region of the adenovirus protease that has not been solved by other techniques and can be used in drug design."

At the National Synchrotron Light Source - a facility that produces extremely bright beams of x-ray, infrared, and ultraviolet light at Brookhaven Lab - Einstein's Sayan Gupta, the study's lead author, bombarded different solutions of the adenovirus protease and DNA with x-rays and characterized the changes that occurred on the surface of the protein. With this technique, the team was able to deduce the location of the DNA binding site based upon the changes in accessible surface area.

"There is extensive contact between the enzyme and the DNA," Gupta said. "The DNA wraps around more than half the enzyme molecule. It appears like a strap, holding two parts of the protease together."

Since the DNA binding site is quite long, there are numerous locations along it that could be used as targets for drugs to block the interaction and act as antiviral agents, Mangel said. The scientists have already begun looking for such drugs and hope to have the National Institutes of Health test some of them for anti-viral activity within a year.