Research on "Holes" May Unearth Causes of Superconductivity

UPTON, NY - Scientists at the U.S. Department of Energy's Brookhaven National Laboratory have uncovered another possible clue to the causes of high-temperature superconductivity, a phenomenon in which the electrical resistance of a material disappears below a certain temperature. In a superconducting compound, they found evidence of a rarely seen arrangement of "holes" - locations where electrons are absent. The results appear in the October 28, 2004, issue of Nature.

The researchers were studying a compound made of strontium, copper, and oxygen (which they've dubbed SCO) that is one of the "cuprates," a family of compounds that contain copper oxide. In SCO, the scientists found evidence of a "hole crystal" - a rigid, ordered arrangement of holes. Holes are positively charged and, like electrons, may interact with each other to produce a superconducting current. 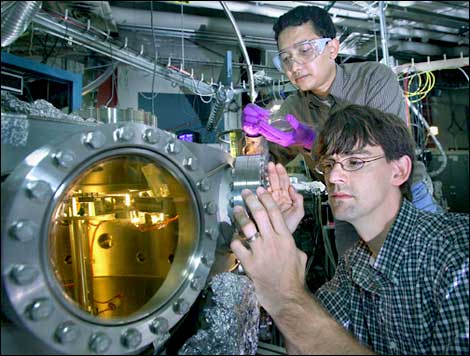 "A hole crystal is a very unusual phenomenon," said Brookhaven physicist Peter Abbamonte, the study's lead researcher. "Its existence is a direct result of the correlations between holes, which are believed to produce superconductivity in other cuprates."

SCO consists of one layer of strontium atoms sandwiched by two sheets of different copper oxides. In one sheet, the copper-oxide molecules form long, parallel chains. The other copper-oxide layer, which contains the hole crystal, has a ladder structure, resembling chains that are linked horizontally.

A hole crystal is just one type of arrangement of electric charge in a material. These arrangements are important because some researchers believe that superconductivity is the result of a particular arrangement, or occurs when a superconductor approaches a boundary between two arrangements. In other cuprates, for example, scientists are studying a charge arrangement in which ribbons of holes and magnetic regions form alternating "stripes."

He and his collaborators studied SCO using x-rays from the National Synchrotron Light Source, a facility at Brookhaven Lab that produces x-ray, ultraviolet, and infrared light for research in a variety of scientific fields. They placed an SCO sample in the path of an x-ray beam, varied the wavelength of the beam, and watched how the x-rays reflected away from the sample.

At a particular energy, the sample reflected back the x-rays very intensely. The research group discovered that this reflection was caused by the holes, which led them to determine that the holes formed an ordered lattice since randomly placed holes could not have produced such a strong reflection.

Abbamonte and his collaborators plan to continue this research by varying the chemical composition of SCO to see if it changes the hole crystal. They will also examine another cuprate to see if its stripes are related to the crystal.

"Clearly, more research needs to be done to study these phases and their possible link to superconductivity," said Abbamonte.