New results may lead to advances in nanotechnology, molecular electronics

UPTON, NY - Scientists from the U.S. Department of Energy's Brookhaven National Laboratory, Bar-Ilan University, and Harvard University have grown ultrathin films of organic chain molecules on the surface of liquid mercury and discovered that the molecules form ordered structures. Similar to sixty years ago when fundamental studies of silicon paved the way to the semiconductor-electronics age, these results help to build a foundation for the development of tiny circuits built using organic molecules - called molecular electronics - a field believed to be the future of many electronic applications.

The scientists are participating in an ongoing program at Brookhaven to grow ultrathin organic films on solid and liquid surfaces. They are most interested in films that have controllable properties at a thickness of just a few nanometers, or billionths of a meter, so that they can engineer technologies based on these properties. In addition to being useful for molecular electronics development, ultrathin organic films are becoming increasingly important for many other emerging technologies, such as flexible electronic displays and advanced biotechnological materials that can, for example, mimic the function of cell membranes. 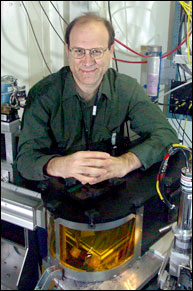 "We decided to use liquid mercury as a surface, instead of a solid," said Brookhaven physicist Benjamin Ocko, the lead author of the study, reported in the January 12, 2005, online edition of Physical Review Letters. "Liquid surfaces are disordered, hence they do not impose a structure of their own on the film. This makes them important testing grounds for organic thin film growth."

The researchers filled a small tray with a layer of liquid mercury and deposited a controlled amount of the organic molecules, called alkyl-thiol, onto its surface. "We chose alkyl-thiol because one end of each molecule is terminated by a sulfur atom that bonds strongly to metal surfaces," explained Henning Kraack, a physicist from Bar-Ilan who participated in the study. "Thiol molecules have been studied extensively on gold surfaces, but the exact nature of the sulfur-gold bond has remained controversial. One of our main goals was to determine the nature of the bond between a similar pair: sulfur and mercury."

The scientists used x-rays from the National Synchrotron Light Source at Brookhaven, a facility that produces x-ray, infrared, and ultraviolet light for research in many fields. They measured how x-rays scattered off the film from different angles using a unique instrument they developed that tilts the x-rays downward onto the liquid mercury surface. The scientists repeated this procedure several times, adding more alkyl-thiol each time to follow how the structure of the film evolved as the density of molecules increased.

The x-ray analysis of the lying-down phase showed that the alkyl-thiol molecules are disordered, pointing in all different directions. However, the standing-up and tilted phases are very ordered, with the molecules arranged in crystalline patterns, despite the disordered liquid nature of the underlying mercury. Additionally, the tilted phase contains an unusual structural feature: The alkyl-thiol chain portions and sulfur atoms line up differently so that the chains form one pattern while the sulfur atoms form another.

"The x-ray analysis indicates that the sulfur atoms from two neighboring chains chemically bond to one underyling mercury atom," explained Ocko. "In the tilted phase, the sulfur-mercury bonds exhibit crystalline order. These bonds also form in the standing-up phase, but, surprisingly, they appear disordered."

"These specific structural and chemical details are necessary for understanding the electronic properties of the film, which is necessary for determining how to use them in new technologies," he said.

In upcoming research, Ocko and his colleagues plan to study the structure of molecular layers sandwiched between two conducting surfaces, a configuration directly relevant to molecular electronics. This work was funded by the Office of Basic Energy Sciences within the U.S. Department of Energy's Office of Science and the U.S.-Israel Binational Science Foundation.