Moving Electrons at the Molecular and Nanometer Scales

Possible applications for solar cells and other small-scale circuits

SAN DIEGO, CA — Learning how to control the movement of electrons on the molecular and nanometer scales could help scientists devise small-scale circuits for a wide variety of applications, including more efficient ways of storing and using solar energy. Marshall Newton, a theoretical chemist at the U.S. Department of Energy's Brookhaven National Laboratory, will present at talk at the 229th National Meeting of the American Chemical Society highlighting the theoretical techniques used to understand the factors affecting electron movement. The talk will take place Monday, March 14, at 10 a.m. in Room 8 of the San Diego Convention Center. 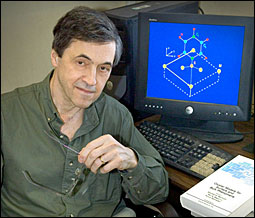 "Electron donor/acceptor interactions govern a huge number of microscopic processes that everything and everybody is dependent upon," says Newton, "from the movement of electrons in electronic devices to the separation of charges necessary for life processes such as nerve cell communication and photosynthesis."

Theoretical chemists like Newton are trying to develop models to understand these interactions in molecular systems, where complex molecules with arbitrary shapes communicate electronically over long distances. Measuring the electronic conductance, or the strength of electron transfer, is one essential part of understanding how the electrons move.

Of particular interest to Newton is learning how the atomic nuclei that exist in the surrounding environment affect the electrons' flow. "The nuclei produce what we call vibronic interactions, which can inhibit or facilitate the flow of the electrons," Newton says. "So we need to understand this effect of the electrons' 'environment' if we want to control the flow."

For example, Newton says, "If you are trying to move charge or energy down a wire, you ideally want it to move down a particular linear pathway. You want to keep it directed in a narrow, confining path, without any conducting paths going off in other directions. If you understand what factors aid or hinder conductance, it should be possible to align the conducting properties in one direction and inhibit them in other directions to achieve that goal."

Through collaborations with experimental colleagues, Newton regularly has a chance to test his theoretical analyses against actual experimental results. "The more we look into these processes theoretically and experimentally, the more complicated the picture becomes. But we think we are getting a good understanding of the key variables that control events at this scale - what promotes good electronic communication and what may inhibit it," he says.

With that understanding, it might be possible to design molecular systems to achieve particular goals, such as improving upon photosynthesis - a research initiative actively supported by the Department of Energy's mission to secure America's future energy needs. One of the first steps in photosynthesis is getting charges separated, then using that energy to make chemical energy you can store for later use. That's the idea behind solar cells. But surpassing nature's design remains a major challenge.

According to Newton, such rational chemical design is far from impossible: "Synthetic chemistry is open ended. If you have an idea about a type of molecule you want to build, you can do it, guided by theoretical understanding to direct your design," he says.

Newton's work is funded by the Office of Basic Energy Sciences; Division of Chemical Sciences, Geosciences and Biosciences; within the U.S. Department of Energy's Office of Science.