TAMPA, FL — The four detector groups conducting research at the Relativistic Heavy Ion Collider (RHIC) — a giant atom "smasher" located at the U.S. Department of Energy's Brookhaven National Laboratory — say they've created a new state of hot, dense matter out of the quarks and gluons that are the basic particles of atomic nuclei, but it is a state quite different and even more remarkable than had been predicted. In peer-reviewed papers summarizing the first three years of RHIC findings, the scientists say that instead of behaving like a gas of free quarks and gluons, as was expected, the matter created in RHIC's heavy ion collisions appears to be more like a liquid.

"Once again, the physics research sponsored by the Department of Energy is producing historic results," said Secretary of Energy Samuel Bodman, a trained chemical engineer. "The DOE is the principal federal funder of basic research in the physical sciences, including nuclear and high-energy physics. With today's announcement we see that investment paying off."

"The truly stunning finding at RHIC that the new state of matter created in the collisions of gold ions is more like a liquid than a gas gives us a profound insight into the earliest moments of the universe," said Dr. Raymond L. Orbach, Director of the DOE Office of Science.

Also of great interest to many following progress at RHIC is the emerging connection between the collider's results and calculations using the methods of string theory, an approach that attempts to explain fundamental properties of the universe using 10 dimensions instead of the usual three spatial dimensions plus time.

"The possibility of a connection between string theory and RHIC collisions is unexpected and exhilarating," Dr. Orbach said. "String theory seeks to unify the two great intellectual achievements of twentieth-century physics, general relativity and quantum mechanics, and it may well have a profound impact on the physics of the twenty-first century."

The papers, which the four RHIC collaborations (BRAHMS, PHENIX, PHOBOS, and STAR) have been working on for nearly a year, will be published simultaneously by the journal Nuclear Physics A, and will also be compiled in a special Brookhaven report, the Lab announced at the April 2005 meeting of the American Physical Society in Tampa, Florida.

"We know that we've reached the temperature [up to 150,000 times hotter than the center of the sun] and energy density [energy per unit volume] predicted to be necessary for forming such a plasma," said Sam Aronson, Brookhaven's Associate Laboratory Director for High Energy and Nuclear Physics. But analysis of RHIC data from the start of operations in June 2000 through the 2003 physics run reveals that the matter formed in RHIC's head-on collisions of gold ions is more like a liquid than a gas.

That evidence comes from measurements of unexpected patterns in the trajectories taken by the thousands of particles produced in individual collisions. These measurements indicate that the primordial particles produced in the collisions tend to move collectively in response to variations of pressure across the volume formed by the colliding nuclei. Scientists refer to this phenomenon as "flow," since it is analogous to the properties of fluid motion.

However, unlike ordinary liquids, in which individual molecules move about randomly, the hot matter formed at RHIC seems to move in a pattern that exhibits a high degree of coordination among the particles — somewhat like a school of fish that responds as one entity while moving through a changing environment.

"This is fluid motion that is nearly 'perfect,'" Aronson said, meaning it can be explained by equations of hydrodynamics. These equations were developed to describe theoretically "perfect" fluids — those with extremely low viscosity and the ability to reach thermal equilibrium very rapidly due to the high degree of interaction among the particles. While RHIC scientists don't have a direct measure of viscosity, they can infer from the flow pattern that, qualitatively, the viscosity is very low, approaching the quantum mechanical limit.

Together, these facts present a compelling case: "In fact, the degree of collective interaction, rapid thermalization, and extremely low viscosity of the matter being formed at RHIC make this the most nearly perfect liquid ever observed," Aronson said.

These images contrast the degree of interaction and collective motion, or "flow," among quarks in the predicted gaseous quark-gluon plasma state (Figure A, see mpeg animation) vs. the liquid state that has been observed in gold-gold collisions at RHIC (Figure B, see mpeg animation). The green "force lines" and collective motion (visible on the animated version only) show the much higher degree of interaction and flow among the quarks in what is now being described as a nearly "perfect" liquid. (Click images for larger version.) An updated video comparing the expected gas with the observed "perfect" liquid is available.

In results reported earlier, other measurements at RHIC have shown "jets" of high-energy quarks and gluons being dramatically slowed down as they traverse the hot fireball produced in the collisions. This "jet quenching" demonstrates that the energy density in this new form of matter is extraordinarily high — much higher than can be explained by a medium consisting of ordinary nuclear matter.

"The current findings don't rule out the possibility that this new state of matter is in fact a form of the quark-gluon plasma, just different from what had been theorized," Aronson said. Many scientists believe this to be the case, and detailed measurements are now under way at RHIC to resolve this question. 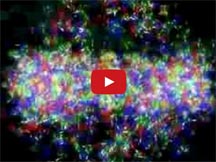 See an updated version of the "perfect" liquid animation.

Theoretical physicists, whose standard calculations cannot incorporate the strong coupling observed between the quarks and gluons at RHIC, are also revisiting some of their early models and predictions. To try to address these issues, they are running massive numerical simulations on some of the world's most powerful computers. Others are attempting to incorporate quantitative measures of viscosity into the equations of motion for fluid moving at nearly the speed of light. One subset of calculations uses the methods of string theory to predict the viscosity of the liquid being created at RHIC and to explain some of the other surprising findings. Such studies will provide a more quantitative understanding of how "nearly perfect" the liquid is.

The unexpected findings also introduce a wide range of opportunity for new scientific discovery regarding the properties of matter at extremes of temperature and density previously inaccessible in a laboratory.

"The finding of a nearly perfect liquid in a laboratory experiment recreating the conditions believed to have existed a few microseconds after the birth of the universe is truly astonishing," said Praveen Chaudhari, Director of Brookhaven Lab. "The four RHIC collaborations are now collecting and analyzing very large new data sets from the fourth and fifth years of operation, and I expect more exciting and intriguing revelations in the near future."

RHIC is funded primarily by the Office of Nuclear Physics within the U.S. Department of Energy's Office of Science. See a complete list of RHIC funders.