UPTON, NY - A new computer — the RIKEN BNL Research Center supercomputer — was unveiled today at a dedication ceremony at the U.S. Department of Energy's Brookhaven National Laboratory attended by physicists from around the world. It is called QCDOC for quantum chromodynamics on a chip, and it was designed and built by Brookhaven Lab, Columbia University, IBM, RIKEN — The Institute of Physical and Chemical Research in Japan, and the University of Edinburgh. The computer has 10 teraflops of peak computing power, which makes it capable of performing 10 trillion arithmetic calculations per second, with sustained speeds of five teraflops. The $5-million computer took three years to build and is funded by RIKEN, with infrastructure support from DOE's Office of Science. 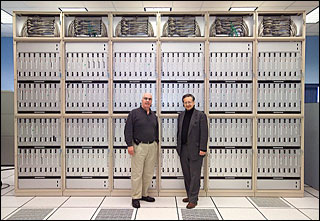 Taking up only 100 square feet of floor space, the supercomputer is installed at Brookhaven Lab in the RIKEN BNL Research Center, a physics research center formed by RIKEN and Brookhaven Lab in 1997. QCDOC achieves its ultra-fast speed by harnessing the power of 12,288 individual computers, each with its own memory and an extremely fast interprocessor communication network. Each processor is constructed on a single silicon chip, so the supercomputer is essentially 12,288 interconnected chips. This simple design leads to a low power requirement of about 100 kilowatts compared to the many megawatts typical of most commercial supercomputers.

QCDOC will be used for physics research for 90 percent of its operating time. With the help of the computer, physicists hope to determine the properties of a state of matter currently under intense study at Brookhaven's premiere accelerator, the Relativistic Heavy Ion Collider (RHIC). One of the major discoveries emerging from RHIC is the creation of a form of hot, dense (10 to 30 times denser than a nucleon) matter whose properties are consistent with those of a strongly coupled plasma of subatomic quarks and gluons - the so-called quark-gluon plasma that existed a few microseconds after the birth of the universe.

Related to this effort, the supercomputer will be used for calculations in quantum chromodynamics - the physics theory that describes the interactions of subatomic quarks and gluons. In particular, physicists hope to understand the reason for the existence of six types of quarks that have widely varied masses. With this powerful computer, they can disentangle quarks from their interactions with gluons to gain important data about both particles' properties.

During the remaining 10 percent of operating time, researchers will use the supercomputer to pursue scientific projects in a variety of fields, including biology and materials science.

The RIKEN BNL QCDOC is one of three similar computers that have been built by the same team of collaborators. Funded by the Particle Physics and Astronomy Research Council in the United Kingdom, the second computer, now completed and beginning operation, is located at the University of Edinburgh, Scotland. The third, which is funded by DOE's Office of Science, will be located at Brookhaven Lab and used by a community of U.S. scientists for calculations in quantum chromodynamics. Now undergoing testing, the third QCDOC is due to be ready for operations in the summer of 2005. Working on related and sometimes different problems using these three supercomputers, researchers hope to make significant contributions in physics and other scientific fields.