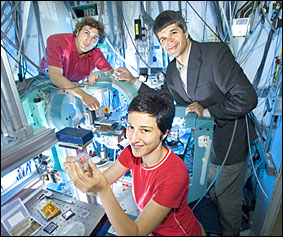 Gabriella Carini and Aleksey Bolotnikov display prototypes of the award-winning detector, while another Brookhaven co-inventor of the device, Giuseppe Camarda, looks on. (Click image to download hi-res version.)

R&D Magazine gives R&D 100 Awards annually to the top 100 technological achievements of the year. Typically, these are innovations that transform basic science into useful products. The awards will be presented in Chicago on October 20.

"This award demonstrates that DOE scientists and researchers are hard at work developing the technologies of the future," said Secretary of Energy Samuel W. Bodman. "In the past, breakthroughs like this one have played an important role in both our economic and national security."

Douglas McGregor of Kansas State University designed the radiation detector, called a cadmium-zinc-telluride Frisch-ring detector, and Brookhaven Lab researchers Aleksey Bolotnikov, Gomez Wright, Gabriella Carini, Giuseppe Camarda and Ralph James built the prototype using the semiconductor alloy, a polymer, and metal rings. The small, portable detector, which measures about one-half inch long by one-quarter inch wide, detects both x-rays and gamma rays with high resolution, and it can identify the specific source of radiation. Unlike most detectors of its type, which have to be chilled, this novel detector can be used at room temperature. Also, its performance is highly reliable with minimal maintenance.

"While other cadmium-zinc-telluride detectors are commercially available, they are more expensive and not as sensitive as the one we developed," Brookhaven's Aleksey Bolotnikov said. "The detector includes a layer of polymer and metal rings, called Frisch-rings, that act as an electrostatic shield for the sensitive crystals inside it. This shielding prevents holes - positively charged particles that are created by x-rays and gamma rays - from degrading the detector's sensitivity."

The detector's innovative design, coupled with a patented process for fabricating the detector's surfaces, enables it to be versatile as well as extremely sensitive. It can be assembled into an array of detectors that can produce high-quality images of radioactive sources distributed over a wide area.

Funding for the development of the award-winning detector came from Brookhaven's Laboratory Directed Research and Development Program and the Department of Energy's National Nuclear Security Administration. While Yinnel Tech, Inc. has marketed the detector, its design and the technology of its fabrication are available for licensing to other companies.

In addition to the researchers mentioned in this news release, Walter McNeil of Kansas State University and Ronald Rojeski of Rojeski Research Engineering and Design contributed to the development of the cadmium-zinc-telluride Frisch-ring detector. McNeil worked as part of the Brookhaven team to fabricate the device, while Rojeski, along with Douglas McGregor (credited in the release), worked on the initial design that, with modifications, led to the award-winning device.