UPTON, NY - Scientists from the U.S. Department of Energy's Brookhaven National Laboratory have discovered that drops of liquid with thicknesses of just a few billionths of a meter, or nanometers, are shaped differently than macroscopic liquid drops. Their results, published in the February 9, 2006, online edition of Physical Review Letters, help elucidate the behavior of nanoscale amounts of liquid and, as a result, may help advance several developing nanotechnologies. 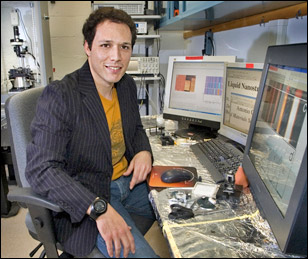 This work is part of an ongoing program at Brookhaven to understand more about the properties of these "nanodrops," such as how they "wet" solid surfaces.

"These studies are important to the emerging field of nanofluidics, which aims to design new technologies to control the flow of minute quantities of liquid," said the study's lead author, Brookhaven physicist Antonio Checco. "An example is the developing 'lab-on-a-chip' concept, in which a small computer chip placed in a biological system can replicate the testing and diagnosis abilities of a full-sized medical lab by interacting with very small amounts of biological liquid."

To create the tiny liquid drops, the researchers began with a solid surface patterned with a series of ultra narrow lines, ranging from 70 to 300 nanometers wide. These lines have different chemical properties than the rest of the surface, which makes them "attract" the liquid to form nanoscale drops.

To determine the shape of the nanodrops, the scientists used a very powerful imaging instrument called an atomic force microscope, which they operated while exposing the patterned surface to vapors of ethyl alcohol, a volatile liquid. The vapor condensed just on the surface lines, forming a layer of liquid lines only a few to tens of nanometers in height.

An atomic force microscope image of several nanoscale liquid lines of ethyl alcohol, shown from the smallest width (left) to the largest. The colors indicate the thicknesses of the lines, with red representing the greatest thickness.

The scientists found that the drop shape deviates from the cylindrical shape of macroscopic drops - typically, when the height of each nanodrop is less than 10 nanometers. At these tiny dimensions, the strength of attractive molecule-molecule forces known as "van der Waals interactions" produces an effective change in the surface tension of the liquid. This change, which depends on the thickness of the liquid layer, must be taken into account when determining the nanodrops' shape. The group further discovered that when a sufficient amount of liquid was adsorbed onto the patterned surface, the cylindrical shape of the drops was recovered.

"Our study not only provides the first observation of such small drops, but confirms a previously untested theoretical prediction that the height of each nanodrop is proportional to the square-root of the width of the liquid line," said Benjamin Ocko, the Brookhaven physicist who heads the research team. "This is a key finding, since it shows that the van der Waals interactions between the liquid and underlying solid strongly influences the behavior of nanoscale wetting systems. In the future, we hope to extend this work to other types of liquids, including other simple organic liquids and polymers."

This work was funded by the Office of Basic Energy Sciences within the U.S. Department of Energy's Office of Science.