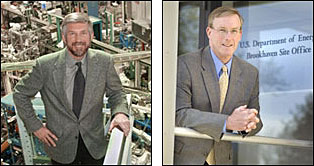 "This is a tremendous step forward for science," said Holland. "The effort that went into this by Steve Dierker and others on the project was tremendous. I thank everyone for their hard work and accomplishments."

Holland noted that as part of the process that leads to CD-1, the next critical decision for the project, the physical site for the facility will be chosen, determining whether NSLS-II will be located at BNL. "There will certainly be a strong case made for NSLS-II at Brookhaven. There is an awful lot of work ahead of us in the next eight to 12 months," he said.

In his comments, Chaudhari congratulated the NSLS staff and many others for their efforts in maintaining the NSLS while working to make the case for NSLS-II. "You ought to take a moment and clap for yourself," he said. "It's been difficult to keep the NSLS running and design a new machine. You are going to have to continue to work very hard, but I expect that you can do it."

Dierker called the announcement a "wonderful occasion." He then presented an overview of the history of the NSLS-II project, from the initial idea to the proposal to the major reviews by DOE, as well as the large and successful NSLS-II workshop in March 2004 - all the results of hard, hard work and cooperation. He thanked everyone for helping to achieve this critical milestone and emphasized the continuing teamwork necessary to continue the process and secure the site.

"There is a strong research community in the Northeast and a tremendous density of academic and research institutions," he said. "Moreover, U.S. synchrotrons are far oversubscribed. We need NSLS-II more than ever, or the science and benefits from that science will move overseas."