UPTON, NY - It doesn't just matter how much radiation an astronaut is exposed to, time and the order in which charged particles strike human cells are important factors as well. That's the main finding of a study simulating radiation exposure conducted at the U.S. Department of Energy's Brookhaven National Laboratory and published in the September 2006 edition of Radiation Research. In the study, human cells were three times more likely to develop properties similar to those in the initial stages of cancer when they were exposed to two types of high-energy particles in a short period of time. 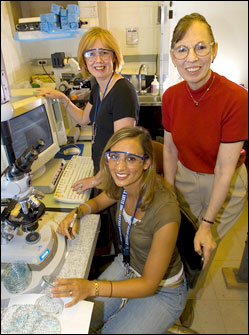 "Most people studying the effects of space radiation have looked at the effects of just one type of particle, either the protons or the HZE particles," said Brookhaven biologist Betsy Sutherland, the paper's lead author. "This is one of the first studies to try to imitate real space radiation conditions closely, where, on average, a cell will be hit by a proton first and then by an HZE particle. We decided to examine what this does to human cells."

To test the effect of dual-particle irradiation, Sutherland's team at the NASA Space Radiation Laboratory, a facility built at Brookhaven Lab specifically for space radiation studies, first exposed normal human cells to a beam of protons. Then, anywhere from 2.5 minutes to 48 hours later, they exposed the cells to iron or titanium particles.

After allowing the cells to grow, the researchers counted the number of cells that survived to form colonies and those that acquired the ability to grow without being affixed to a solid surface. This characteristic, known as anchorage-independent growth, is an early indicator that these cells might be on the pathway to cancer.

"There are a lot of animal-based systems for measuring the induction of cancer, but you can't just take human cells and treat them with radiation or chemicals and immediately get cancer cells," Sutherland said. "You have to do several treatments in order to get a real cancer cell. Some people study the end stages of this process, but we look at the very first step."

The research team found that the probability that cells undergo this initial transformation depends on the time interval between the cell's exposure to protons and HZE particles. When the cells received both irradiations within 2.5 minutes to one hour, they produced about three times more anchorage-independent colonies per survivor than expected from the sum of the effects of the two radiation exposures.

"If you hit cells in less than an hour with a little tickle of protons and, on average, one iron ion per cell, that's when you get the big increase in transformation," Sutherland said. "If this were to happen in space, a certain fraction of the astronaut's cells would have a higher risk of going along this initial path to cancer development."

The good news, Sutherland said, is that in real space, most of the charged particle hits do not occur that close together in time. Therefore, only a small part of the astronaut's cells would have an increased risk of becoming cancerous.

The reason for the observed increase in anchorage independence in response to the one-two particle punch is not yet clear. The obvious effects - those related to survival or the cell cycle - tuned out not to be the cause of increased transformation, Sutherland said. The team observed a further complication when the order of particle exposure was reversed; there was no increase in anchorage independence when the cells were hit with either an iron or titanium particle first, followed by protons.

"Now our challenge is to figure out exactly what is happening," Sutherland said, adding that the results of this study and projects like it help NASA assess the hazards of space travel. "If we're going to send people into space, it's our responsibility to tell them what their risks are and investigate ways to mitigate the danger."