Pushed back a week because of rain, the 2006 Light Sources Directorate Picnic took place on September 21 without a cloud in the sky. For the first time, the annual end-of-year celebration was held for both NSLS and NSLS-II employees, hosted by NSLS Chair Chi-Chang Kao and Steve Dierker, Associate Laboratory Director for Light Sources. In addition to the vast amounts of meat, cheese, pasta salads and candy, Kao presented a cake to celebrate 1,000 injury-free days at the NSLS. The cake was cut - carefully - by Jim Tarpinian, Assistant Laboratory Director for Environment, Safety, Health and Quality, after he congratulated employees on the significant safety milestone. 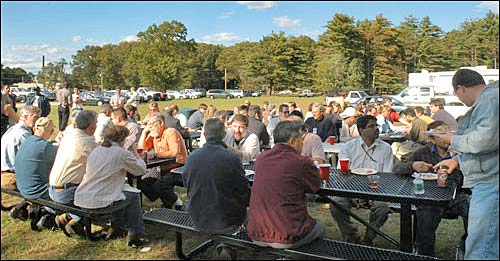 NSLS and NSLS-II employees enjoy the food at the annual barbeque.

Michael Caruso, Richard Freudenberg, Richard Heese and Pooran (Boyzie) Singh were honored for 25 years of service at Brookhaven Lab, and 20-year awards went to Scott Buda, Shuchen Kate Feng, and Michael Fulkerson. In the 10-year category were G. Lawrence Carr, Elaine DiMasi, Joan Marshall, Cheo Teng, and John Vaughn III. And although it isn't an officially recognized BNL milestone, John Dabrowski was acknowledged for an impressive 45 years of service at the Lab. 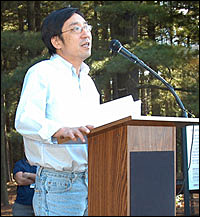 The Spotlight awards are tributes to NSLS staff members who have shown exceptional dedication to their jobs during the year. This year, the winners were:

Walter DeBoer: The vendor contracted to build the X25 undulator could not deliver the completed device on schedule, so the burden of completing and testing the device fell onto the NSLS technical staff. From August 2005 through February 2006, DeBoer took on a great amount of that responsibility, traveling twice to Lansing, NY, to assemble, bake, and vacuum-test the undulator. Working unpaid hours on long days and weekends both in Lansing and at BNL, DeBoer is a big reason why the undulator was installed successfully during the winter shutdown.

David Harder: The original schedule for X25 undulator development included at least one and a half months for magnetic measurement and shimming of the device. However, the delivery was delayed because of the vendor, and as a result, less than two weeks was left to spend on these steps. Harder, whose careful examination of the Hall probe scanning system enabled a precise characterization of the undulator's magnetic field, spent seven days a week for two months on the project to compensate for the lost time.

Mike Lehecka: Lehecka also worked seven days a week for two months to make up for lost time on the magnetic measurement and shimming aspect of the X25 undulator installation. Lehecka, who runs the pulsed wire bench for the NSLS magnetic measurement laboratory, does both mechanical and intricate vacuum-related work. He is an expert in setting up pulsed wire measurement systems, which vendors don't have the capability to do. Without his effort, the X25 undulator measurements couldn't have been finished in such a short amount of time.

Ed Losee: In the effort to produce superconducting undulators for the NSLS and NSLS-II, Losee undertook the responsibility for prototype undulator magnet fabrication and assembly. The process requires special skills and equipment, and such devices had never been built in the United States. With minimal direction, Losee taught himself how to use a complex turntable device to fabricate the magnet, and using it, he then produced several prototypes. The NSLS can now produce and test superconducting magnets and other complex components in-house with Losee's assistance and skills. Losee also provided significant support on the X17 superconducting wiggler during the winter 2005-06 shutdown. 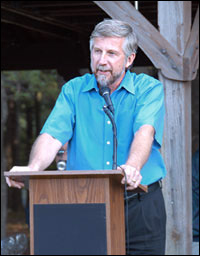 Philip Marino and Tom McDonald: Marino and McDonald won this shared Spotlight Award for upgrading the NSLS beamline safety checklists, which were old, difficult to use, and didn't have a system in place to assure periodic review and update. Beginning in 2003, Marino and McDonald approached each beamline to identify the critical components, meeting with the local contacts to assure minimal interruption to operation. They then made and connected all the needed labels and photos and assembled the new checklists in a standard format. The NSLS relies on this system for radiological safety, and Marino and McDonald spent considerable effort and time completing the upgrade.

Paul Montanez: Montanez served as an engineer, supervisor and coordinator during the relocation of beamlines X9A and X9B to X3. The series of moves was planned and coordinated in a way that needed no additional shutdown time for the machine and minimized the total disruption to the X9 program. The originally proposed spring shutdown schedule was cut in half because Montanez figured out ways to do more preparation and minimize work. He put in extra hours to ensure this relocation was successful while still completing projects with beamline X25 and NSLS-II.

Charlie Nielson and Wayne Rambo: The NSLS Controls and Diagnostics groups were tasked with integrating the X25 MGU control system, designed by an outside contractor, into the NSLS Controls System. At the end of 2005 and early part of 2006, Rambo and Nielson both put in overtime hours and extraordinary effort to accomplish the system pre-testing, installation and commissioning within the tight schedule. Both men made trips to Advanced Design Consulting in Lansing, NY, to check on the project's progress and work around problems as they came up during testing and commissioning.

Mihai Radulescu: The bellows on the VUV injection shutter failed during operations in July 2006. A previous failure of this same assembly required complete removal and rebuilding of the shutter, and fortunately, the about two-week repair process happened near a major maintenance time. This recent instance, however, would have resulted in major downtime if it weren't thanks to Radulescu. He developed a method for removing the actuator while leaving the shutter block in place. This whole process was completed in less than 60 hours from the time it was discovered.