The following news release about the Large Synoptic Survey Telescope (LSST) is being issued by the LSST Corporation. Google Inc. has joined nineteen other organizations, including Brookhaven National Laboratory, to build the LSST, a huge telescope that would image the entire visible southern sky. At the heart of the camera are 3 gigapixels of advanced sensors packaged into a set of 25 "towers" with tightly integrated electronics and cooling components. Brookhaven researchers will be part of a large team responsible for designing and assembling these key building blocks. Once in operation, the LSST will provide a rich set of data to researchers at Brookhaven and other institutions to study dark matter and dark energy, two key ingredients of the universe about which very little is presently known. For more information about Brookhaven's role in the project, contact Karen McNulty Walsh at (631) 344-8350 or kmcnulty@bnl.gov. 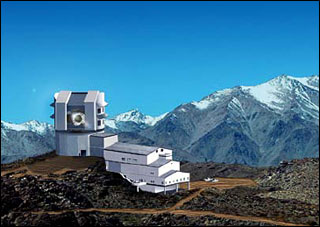 Google has joined a group of nineteen universities and national labs that are building the Large Synoptic Survey Telescope (LSST).

Scheduled to begin operations in 2013, the 8.4-meter LSST will be able to survey the entire visible southern sky deeply in multiple colors every week with its three-billion pixel digital camera, probing the mysteries of Dark Matter and Dark Energy, and opening a movie-like window on objects that change or move rapidly: exploding supernovae, potentially hazardous near-Earth asteroids as small as 100 meters, and distant Kuiper Belt Objects. LSST is a public-private partnership.

LSST and Google share many of the same goals: organizing massive quantities of data and making it useful. Over 30 thousand gigabytes (30TB) of images will be generated every night during the decade-long LSST sky survey. The massive amount of data from LSST must be managed efficiently and analyzed in real time. Key areas in the Google-LSST collaboration will be: organizing the massive ingestion of information, processing and analyzing the continuous data streams in a 24/7 fault tolerant manner, enabling the new discoveries coming out of the LSST to be made available to the public and researchers in real time, and working with and managing large parallel data systems. In addition to aiding professional scientists and amateur astronomers, properly organized the LSST data will generate a new and dynamic view of the night sky for the public. LSST data will be valuable to curious minds of all ages, and will provide a powerful teaching tool.

In applying for membership, William Coughran, Google VP of Engineering, said "Google's mission is to take the world's information and make it universally accessible and useful. The data from LSST will be an important part of the world's information, and by being involved in the project we hope to make it easier for that data to become accessible and useful."

"The LSST will be the world's most powerful survey telescope, with vast data management challenges. LSST engineers and scientists have been collaborating with Google on a number of these exciting opportunities. Even though the Universe is very old, exciting things happen every second. The LSST will be able to find these events hundreds of times better than today's other big telescopes. Google will help us organize and present the seemingly overwhelming volumes of data collected by the LSST," said Donald Sweeney, LSST Project Manager.

"Partnering with Google will significantly enhance our ability to convert LSST data to knowledge," said University of California at Davis Professor and LSST Director J. Anthony Tyson. "LSST will change the way we observe the universe by mapping the visible sky deeply, rapidly, and continuously. It will open entirely new windows on our universe, yielding discoveries in a variety of areas of astronomy and fundamental physics. Innovations in data management will play a central role."

The LSST research and development effort is funded in part by the National Science Foundation under Scientific Program Order No. 9 (AST-0551161) through Cooperative Agreement AST-0132798. Additional funding comes from private donations, in-kind support at Department of Energy laboratories and other LSSTC Institutional Members.

More information about the LSST including current images, graphics, and animation can be found at http://www.lsst.org