UPTON, NY - Scientists at the U.S. Department of Energy's Brookhaven National Laboratory have developed a new method for controlling the self-assembly of nanometer and micrometer-sized particles. The method, based on designed DNA shells that coat a particle's surface, can be used to manipulate the structure - and therefore the properties and potential uses - of numerous materials that may be of interest to industry. For example, such fine-tuning of materials at the molecular level promises applications in efficient energy conversion, cell-targeted systems for drug delivery, and bio-molecular sensing for environmental monitoring and medical applications. 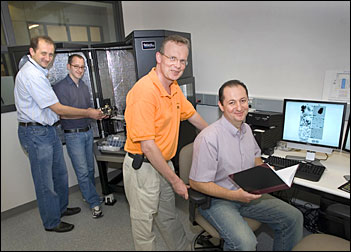 The novel method, for which a patent application has been filed, was developed by Brookhaven researchers Mathew M. Maye, Dmytro Nykypanchuk, Daniel van der Lelie, and Oleg Gang and is described in the September 12 online edition of Small, a leading journal on nanoscience and nanotechnology.

"Our method is unique because we attached two types of DNA with different functions to particles' surfaces," said Gang, who leads the research team. "The first type - complementary single strands of DNA - forms a double helix. The second type is non-complementary, neutral DNA, which provides a repulsive force. In contrast to previous studies in which only complementary DNA strands are attached to the particles, the addition of the repulsive force allows for regulating the size of particle clusters and the speed of their self-assembly with more precision."

"When two non-complementary DNA strands are brought together in a fixed volume that is typically occupied by one DNA strand, they compete for space," said Maye. "Thus, the DNA acts as a molecular spring, and this results in the repulsive force among particles, which we can regulate. This force allows us to more easily manipulate particles into different formations."

The researchers performed the experiments on gold nanoparticles - measuring billionths of a meter - and polystyrene (a type of plastic) microparticles - measuring millionths of a meter. These particles served as models for the possibility of using the technique with other small particles. The scientists synthesized DNA to chemically react with the particles. They controlled the assembly process by keeping the total amount of DNA constant, while varying the relative fraction of complementary and non-complementary DNA. This technique allowed for regulating assembly over a very broad range, from forming clusters consisting of millions of particles to almost keeping individual particles separate in a non-aggregating form.

The method was tested separately on the nano- and micro-sized particles, and was equally successful in providing greater control than using only complementary DNA in assembling both types of particles into large or small groupings.

To determine the structure of the assembled particles and to learn how to modify them for particular uses, the researchers used transmission electron microscopy to visualize the clusters, as well as x-ray scattering at the National Synchrotron Light Source to study particles in solution, the DNA's natural environment.

The Office of Basic Energy Sciences within the U.S. Department of Energy's Office of Science funded this research.