UPTON, NY - The capabilities of the world's second fastest supercomputer for general scientific use will be on display at the SC2007 (Supercomputing) conference at the Reno-Sparks Convention Center from November 10 to 15. This new supercomputer, known as New York Blue, is an 18-rack IBM Blue Gene/L massively parallel supercomputer located at the U.S. Department of Energy's Brookhaven National Laboratory (BNL) as the centerpiece of the New York Center for Computational Sciences (NYCCS), a cooperative effort between BNL and Stony Brook University. New York Blue was purchased through a grant from New York State and will provide computational resources to institutions throughout the state. 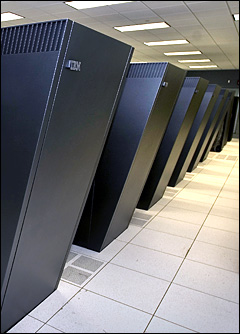 With a peak performance of 103.22 teraflops (trillion floating-point calculations per second), New York Blue will allow computations critical for research in biology, medicine, materials science, nanoscience, renewable energy, climate science, finance, and technology. Later this month, it will be joined by a 28 teraflops Blue Gene/P machine.

"These two machines, together with Brookhaven's existing QCDOC [for quantum chromo-dynamics on a chip] supercomputers, make Brookhaven one of the most powerful supercomputing sites in the world," said Jim Davenport, Director of Brookhaven's Computational Sciences Center.

Brookhaven is already one of the world's major sites for performing complex calculations in the study of quantum chromodynamics (QCD) - the theory that describes the interactions of subatomic particles. These calculations are essential to predicting and understanding the behavior of subatomic particles in collisions at the Lab's Relativistic Heavy Ion Collider (RHIC), and at the Large Hadron Collider (LHC), a new particle accelerator nearing completion near Geneva, Switzerland. Both facilities require worldwide distributed computing facilities to collect, process, distribute and analyze petabytes of data. Brookhaven operates the primary computing facility for RHIC experiments with one of the largest Linux clusters in the world, and will be the Tier 1 facility for analyzing and distributing data from ATLAS, one of the experiments at the LHC.

Brookhaven Lab's display at SC2007 will also showcase the supercomputers' applications in modeling protein structures for the breakdown of cellulose in an effort to develop biofuels, studies of the geometrical structure of zinc oxide nanotubes, understanding fluid dynamics for new nuclear reactor designs, and modeling the role of aerosols in global climate change.

Research at Brookhaven's Center for Computational Sciences is funded by the Office of Advanced Scientific Computing within the U.S. Department of Energy's Office of Science.