Racing Ahead at the Speed of Light

UPTON, NY — Imagine trying to catch up to something moving close to the speed of light - the fastest anything can move - and sending ahead information in time to make mid-path flight corrections. Impossible? Not quite. Physicists at the Relativistic Heavy Ion Collider (RHIC), a particle accelerator at the U.S. Department of Energy's Brookhaven National Laboratory, have achieved this tricky task - and the results may save the Lab money and time in their quest to understand the inner workings of the early universe.

The physicists have developed a way to measure subtle fluctuations in RHIC's particle beams as they speed around their 2.4-mile-circumference high-tech racetrack - and send that information ahead to specialized devices that smooth the fluctuations when the beam arrives. 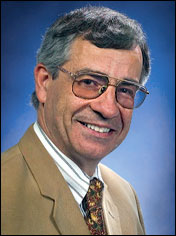 "These corrections help to keep the beams focused and colliding, recreating thousands of times a second the conditions that existed just after the Big Bang," said Steven Vigdor, Brookhaven Lab's Associate Laboratory Director for Nuclear and Particle Physics, who manages the RHIC program.

Already, RHIC scientists have learned that mere microseconds after the Big Bang, the universe was more interesting than imagined - a nearly "perfect" liquid with virtually no viscosity and strong interactions among its constituents. With the ability to race ahead of RHIC's beams and keep them focused, the scientists will be able to create many more "mini-Bangs" for study. The increase in data will help them investigate and measure the detailed properties of this "perfect" liquid, and test certain predictions stimulated by an unanticipated link between RHIC findings and "string theory," an appealing approach to incorporate gravity into a unified theory that describes all of Nature's forces.

The beam-correcting technique, called stochastic cooling*, has been implemented at accelerators where the beams are made of a continuous stream of particles - but never before at a facility where the particles travel in discrete bunches, as is necessary for the beam-on-beam collisions that take place at RHIC. "Its successful demonstration at RHIC provides an alternative path to the goal of increased collision rates, which would be much more costly and take longer to achieve via other proposed means," Vigdor said. 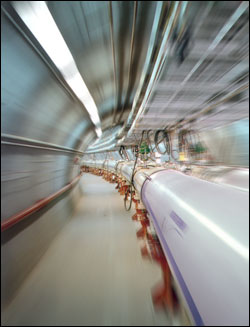 RHICs 2.4 mile ring has six intersection points where its two rings of accelerating magnets cross, allowing the particle beams to collide. The collisions produce the fleeting signals that, when captured by one of RHICs experimental detectors, provide physicists with information about the most fundamental workings of nature.

RHIC circulates two beams of ions - electrically charged particles - moving in opposite directions in two separate rings at 99.995 percent the speed of light. Within each beam, the ions travel in discrete groups, or "bunches," each containing more than a billion ions.

In the highest-energy experiments, the ions are the nuclei of gold atoms, composed of protons and neutrons that slam together where the two beams cross to produce a tiny speck of extremely hot, dense matter that mimics the conditions of the early universe.

But like all charged particle beams, RHIC's ions tend to spread out (heat up) as they circulate. As the ions spread, the number of protons and neutrons colliding - and the amount of useful data - declines.

So RHIC physicists are taking advantage of RHIC's circular shape and the ability to send signals as fast as the near-light-speed beam to cool the ions down - that is, keep them tightly bunched.

The technique includes the term stochastic (derived from statistics, meaning random) because it relies on measuring the random fluctuations in the beam shape and size. The measurements are made at one point on the accelerator by devices that generate signals proportional to how far the particles are straying from their ideal positions. These devices then send the signals via fiberoptic or microwave links to a position ahead of the speeding beam, where electric fields are generated to "kick" the charged particles back toward their ideal positions. The result: more tightly squeezed, cooler ion bunches.

Schematic layout of "pickups" (for measuring beam fluctuations) and "kickers" (for applying electrical fields to correct the fluctuations) — and the fiber optic and microwave links between the two — when longitudinal and transverse stochastic cooling are implemented for both beams at RHIC.

The signals stay ahead of the beam by taking one of two shortcuts - either traveling from one point to another across the circular accelerator, or by backtracking along the circle to meet the speeding beam about halfway around on its next pass.

So far the RHIC physicists have tested stochastic cooling in the longitudinal direction - along the direction of the beam - in one of RHIC's two rings. Longitudinal cooling compensates for the ion bunches' tendency to lengthen as they circulate. This improvement has already increased RHIC's heavy-ion collision rate by 20 percent. Next, the physicists will test the same cooling system in RHIC's other ring.

With $7 million in additional funding, the physicists will design and build a similar system for correcting the tendency of RHIC's ion bunches also to become "fatter" as they circulate. Computer simulations, which have accurately predicted the achievements of the longitudinal cooling system, predict that combining this new transverse cooling system with longitudinal cooling in both rings and some additional equipment could increase collision rates overall by 500 percent.

"This achievement would compare quite favorably with the goals of our original plan for upgrading collision rates based on a system known as electron cooling, which we estimate would have cost $95 million," said Vigdor. Plus, stochastic cooling can be implemented much more quickly than adding an electron-cooling accelerator because no new construction is required.

Research at RHIC is funded primarily by the Office of Nuclear Physics within the U.S. Department of Energy's Office of Science and by various national and international collaborating institutions. For a complete list of RHIC funders, go to: http://www.bnl.gov/rhic/funding.htm.

* From Wikipedia: Stochastic cooling was invented and first applied at the Super Proton Synchrotron at CERN in Geneva, Switzerland by Simon van der Meer, an engineer from the Netherlands. It was used to collect and cool antiprotons—these particles were injected into the SPS with counter-rotating protons and collided at a particle physics experiment. For this work, van der Meer was awarded the Nobel Prize in Physics in 1984. He shared this prize with Carlo Rubbia of Italy, who conducted the physics experiment that took advantage of this breakthrough.