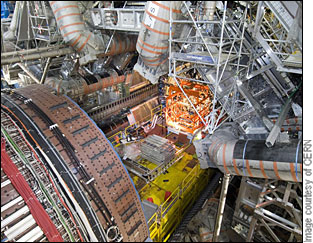 UPTON, NY - Today, researchers in the U.S. ATLAS collaboration joined colleagues around the world to celebrate a pivotal landmark in the construction of the Large Hadron Collider (LHC) - the lowering of the final piece of the ATLAS particle detector into the underground collision hall at CERN in Geneva, Switzerland. Experiments conducted at this revolutionary LHC facility, poised to become the world's most powerful particle accelerator, may help scientists unravel some of the deepest mysteries in particle physics. The U.S. branch of the collaboration (U.S. ATLAS), based out of the U.S. Department of Energy's (DOE) Brookhaven National Laboratory, built and delivered several key elements of the ATLAS detector.

"We're proud of the teams involved in this international scientific endeavor - one of the largest collaborative efforts ever attempted in the physical sciences," said Dennis Kovar, acting associate director for High Energy Physics in DOE's Office of Science. "This technical landmark brings us a huge step closer to unveiling a new level of understanding of our universe."

Of the almost 2,100 participants in the ATLAS collaboration, about 420 are U.S. physicists, engineers, and graduate students. Hailing from 38 universities and four national laboratories, these U.S. collaborators are supported by DOE and the National Science Foundation (NSF).

The last piece of ATLAS lowered into the ATLAS experimental cavern is one of two elements known as the small wheels. The two ATLAS small wheels, though little in comparison to the rest of the ATLAS detector, are each about 30 feet in diameter and weigh 100 tons. The wheels are covered with sensitive detectors that will be used to identify and measure the momentum of subatomic particles called muons that are created in collisions at the LHC. The entire detector system has an area equal to three football fields, consisting of 100 million independent electronic channels. As charged particles pass through a magnetic field created by superconducting magnets, this detector has the ability to accurately track them to the precision of the width of a human hair.

"This is a remarkable milestone in the complicated construction of the ATLAS detector," said Joseph Dehmer, director of the Physics Division at the NSF. "The LHC is one of the most exciting physics experiments for this decade and beyond. We are impressed by the hundreds of U.S. university and national laboratory scientists who are working hard to make this extraordinary project a reality. We look forward to the groundbreaking results that are now just around the corner."

Involving the work of 450 physicists from 48 institutions around the world, lowering this last small wheel marks the end of a decade of planning and construction of the muon spectrometer system.

"For me personally, this is the culmination of many years of work designing, planning, and installing the mechanical structure," said Vincent Hedberg, who led the development of the small wheel support system. "For ATLAS as a whole, the last large detector is finally in place." 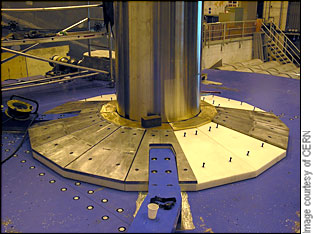 Experiments at the LHC will allow physicists to take a big leap in their exploration of the universe. The ATLAS detector may help its scientists unravel some of the deepest mysteries in particle physics such as the origin of mass or the identification of dark matter. The ATLAS collaboration will now focus on commissioning the detector in preparation for the start-up of the LHC this summer.

Photos are available at: http://atlasexperiment.org/atlas_photos/muoncham/muoncham_gen.html

Video is available at: http://atlasexperiment.org/webcams.html