Talk on 'Solar Grand Plan' to be Held at Brookhaven Lab, April 21 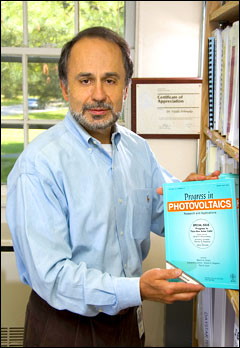 UPTON, NY - Vasilis Fthenakis, head of the National Photovoltaic Environmental Research Center at the U.S. Department of Energy's Brookhaven National Laboratory, will give a talk titled "Solar Grand Plan" at the Laboratory's Berkner Hall on Monday, April 21, at noon. Part of an Earth Day celebration, the talk is free and open to the public. Visitors to the Laboratory age 16 and older must bring a photo ID.

Fthenakis coauthored the cover story of the January 2008 issue of Scientific American, proposing an ambitious plan to free the U.S. from dependence on fossil fuels through a massive switch to solar power. In the article, Fthenakis, along with coauthors Ken Zweibel of PrimeStar Solar and James Mason of the Hydrogen Research Institute, notes that, by 2050, solar energy could supply 69 percent of the nation's electricity and 35 percent of its total energy needs.

In their plan, the three solar energy experts propose covering thousands of square miles of the southwestern U.S. with photovoltaic arrays to convert sunlight into electricity and to distribute this solar cell-produced electricity across the nation. This "Solar Grand Plan" would put an end to foreign-oil dependence, reduce the trade deficit, cut air pollution, and slow global climate change.

In his Brookhaven lecture, Fthenakis will discuss the benefits of solar power as well as the difficulties of getting the "Solar Grand Plan" implemented, including its cost. For the plan to become a reality, the U.S. government would have to invest $420 billion in price supports over the next 40 years.

A senior scientist at Brookhaven, Fthenakis earned his bachelor's degree in chemistry from the University of Athens, a master's degree in chemical engineering from Columbia University, and a Ph.D. in fluid dynamics and atmospheric science from New York University. Fthenakis joined Brookhaven as a research engineer in 1980 and has served as head of the National Photovoltaic Environmental Research Center since 2002.

Fthenakis has participated in energy expert panels for the American Institute of Chemical Engineers, the U.S. Department of Energy, the European Photovoltaic Industry Association, the California Energy Commission and the New York Academy of Sciences. He has also served as a safety and environmental consultant for major oil and chemical companies in the U.S. and as an expert on investigating major chemical incidents in the U.S.

While maintaining his position at Brookhaven, Fthenakis, in 2006, established and became the Director of the Center for Life Cycle Analysis at Columbia University. Fthenakis's publications include coauthoring the book Prevention and Control of Accidental Releases of Gases and over 200 scientific papers and reports. He is a Fellow of both the American Institute of Chemical Engineers and the International Energy Foundation.

For more information about the lecture, call 631 344-2345. The Laboratory is located on William Floyd Parkway (County Road 46), one and a half miles north of Exit 68 of the Long Island Expressway.