Could lead to industrial applications including improved sensors, actuators, transducers

UPTON, NY - Scientists at the U.S. Department of Energy's Brookhaven National Laboratory and collaborators at Stony Brook University, Johns Hopkins University, and the National Institute of Standards and Technology have discovered that nanosized regions with local polarizations, or "electric dipoles," in a special class of otherwise disordered materials may underlie these materials' extreme electromechanical response to an external electric field or physical deformation. 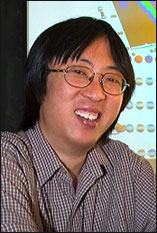 "Such materials show enormous potential for industrial applications such as next-generation sensors, actuators, and transducers that convert between mechanical and electrical forms of energy," said Brookhaven Lab physicist Guangyong Xu, lead author on a paper describing the work to be published online by Nature Materials May 11, 2008.

Known as relaxor ferroelectrics, or relaxors for short, these materials have the ability to deform significantly in response to an electric field, or conversely, to have an electric current induced within them by a deforming physical force. This property, known as a piezoelectric response, is ideal for producing sensors and other devices. Understanding the origin of some materials' extreme piezoelectric response may lead to the development of improved materials for a variety of applications.

Scientists have known that changes in small areas of a material can sometimes have drastic effects on the behavior of the bulk material. Many have investigated the effects of "polar nanoregions" — tiny, nanometer-scale regions of ordered electric dipole moments — on the long range polar order in these materials. But the relationship between polar nanoregions and the electromechanical and other structural properties of relaxor systems remained unclear, until now.

The Brookhaven team and their collaborators have established a link between polar nanoregions and the materials' crystal structure and lattice dynamics in a relaxor system.

"Our work provides a scenario wherein the interaction of polar nanoregions and the bulk lattice introduces an underlying structural instability, which could provide the microscopic origin of the large piezoelectric properties of relaxor systems," Xu said.

In general, atoms in solids can move about their "set" positions in the crystal lattice and propagate energy in the form of sound waves. The scientists have found a strong interaction between polar nanoregions and the propagation of these sound waves, the visibility of which can be enhanced with the application of an external electric field.

By comparing how these sound waves propagate in different directions, the scientists observed a large asymmetry in the response of the lattice. This directional dependency of the response appears to be induced by the polar nanoregions.

In order to be a good piezoelectric material, the lattice shape must be able to change significantly in response to an external electric field. Theoretical work has suggested that a phase instability may be responsible for this effect. The directional dependence of sound wave propagation in the current study provides strong evidence that such a phase instability does exist and is indeed induced by the polar nanoregions. This intrinsic instability apparently helps to facilitate the field-induced structural change and contributes to the large piezoelectric response.

In addition to Xu, the research team includes Jinsheng Wen of Brookhaven Lab and Stony Brook University, Christopher Stock of Johns Hopkins University and NIST, and Peter M. Gehring, NIST. The research was funded by the Office of Basic Energy Sciences within the U.S. Department of Energy's Office of Science, and the Natural Science and Research Council of Canada.