J.C. Séamus Davis Elected to the National Academy of Sciences 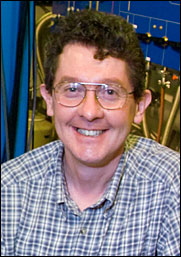 UPTON, NY — J. C. Séamus Davis, a senior physicist at the U.S. Department of Energy’s (DOE) Brookhaven National Laboratory and Director of DOE’s Center for Emergent Superconductivity at Brookhaven Lab, has been elected to the National Academy of Sciences. He is among 72 new members and 18 foreign associates recognized this year for “their distinguished and continuing achievements in original research.”

The National Academy of Sciences is a private organization of scientists and engineers dedicated to the furtherance of science and its use for the general welfare. The Academy is, upon request, an official advisor to the federal government in any matter of science or technology. Election to the Academy is considered one of the highest honors that can be given to a scientist.

“I am amazed and delighted,” Davis said. “I had never considered such an honor. The continued success of our research programs is due in great part to the wonderful collaborators with whom I have worked over the last 25 years, including Professors Richard E. Packard and Dunghai Lee at the University of California, Berkeley, and Professors Shinichi Uchida and Hidenori Takagi at the University of Tokyo, Japan.”

Davis, who is also the J.G. White Distinguished Professor of Physical Sciences at Cornell University, and the Scottish Universities Physics Alliance (SUPA) Distinguished Research Professor of Physics at the University of St. Andrews in Scotland, specializes in research to illuminate the behavior of superconductors, superfluids, and supersolids. Superconductors have no electrical resistance at specific temperatures, mostly near absolute zero (minus 459.67 degrees Fahrenheit). Superfluids and supersolids have similar unusual properties. Superfluids have the ability to flow without friction, and materials can flow through supersolids without dissipation.

Davis and his colleagues use a wide variety of lab-scale instruments that they have designed and fabricated for their research. Among these, Davis and his group developed a spectroscopic imaging scanning tunneling microscope that can resolve details smaller than the diameter of an atom. He uses several of these systems, located at Brookhaven Lab and Cornell University, to image the wave functions – the natural wavelike characteristics – of electrons directly, thereby transforming scientists’ ability to visualize and understand complex electronic materials. Davis’s insights on how the behavior of electrons in high-temperature superconductors affects the transition temperature — the temperature at which a material loses its electrical resistance — may contribute to the discovery of new superconducting materials that are suitable for applications such as zero-loss energy generation and transmission systems.

Davis earned a B.Sc. in physics from the University College Cork at the National University of Ireland in 1983 and Ph.D. in physics from the University of California, Berkeley (UC Berkeley), in 1989. He became a postdoctoral research associate at UC Berkeley in 1990 and joined the faculty there in 1993, rising through the ranks to become a physics professor in 2001. From 1998 to 2003, he was also a faculty physicist at Lawrence Berkeley National Laboratory (LBNL). He then joined Cornell University as a physics professor in 2003, and rose to his current position in 2008. He came to Brookhaven Lab in 2007 as a senior physicist, and in 2009 was appointed Director of DOE’s Center for Emergent Superconductivity, one of 46 Energy Frontier Research Centers established last year by DOE. Also in 2007, he became SUPA Distinguished Research Professor of Physics at the University of St. Andrews.

A Fellow of the American Physical Society and the Institute of Physics, Davis has won numerous awards for his work, including the National Science Foundation’s Young Investigator Award and the Packard Fellowship in Science and Engineering. He received the Miller Research Professorship at UC Berkeley in 1997, the Outstanding Performance Award from LBNL in 2001, the Fritz London Memorial Prize in 2005, and the Heike Kamerlingh-Onnes Prize in 2009.

The DOE Office of Science, the US Office of Naval Research, the US National Science Foundation, Cornell University, and the UK Engineering and Physical Sciences Research Council fund Davis’s work.