Demonstration of precision DNA-based nanoassembly method could lead to advances in solar cells, optoelectronics, and biosensors

UPTON, NY — By linking individual semiconductor quantum dots with gold nanoparticles, scientists at the U.S. Department of Energy’s (DOE) Brookhaven National Laboratory have demonstrated the ability to enhance the intensity of light emitted by individual quantum dots by up to 20 times. The precision method for making the light-emitting particle clusters — published online July 26, 2010 in the journal ChemComm — will greatly advance scientists’ ability to study and modify the optical properties of quantum dots, and could eventually lead to improved solar energy conversion devices, light-controlled electronics, and biosensors. 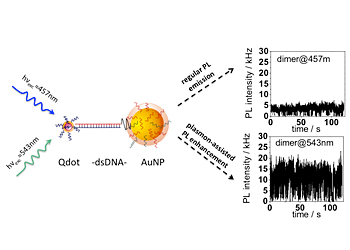 Photoluminescence enhancement is demonstrated at the single molecule level for two-particle systems composed of a quantum dot (Qdot) and gold nanoparticle (AuNP) linked by double stranded DNA (dsDNA) when optically excited with wavelengths within the surface plasmon resonance range of the gold nanoparticle.

“Quantum dots — tiny crystals of semiconductor materials that fluoresce, or emit light, in response to photoexcitation — have enormous potential for use in a wide range of fields from solar energy conversion to computing and medicine,” said Mircea Cotlet, a physical chemist at Brookhaven’s Center for Functional Nanomaterials (CFN) and lead author on the current study. “But many factors can influence the light they emit, and it’s hard to sort out the contributions of these factors in large samples due to the inherent ensemble averaging. Building single-molecule structures at the CFN seemed the ideal way to tease out these effects.”

The Brookhaven team recently developed a precision technique for building such nano-sized structures using short strands of DNA as a highly specific “glue” to link particles together. 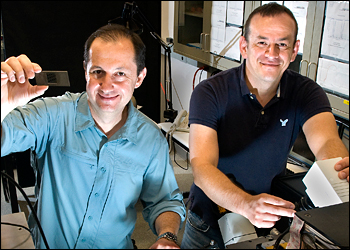 “DNA consists of two strands with complementary pairings of bases that stick together in only one way,” explained Oleg Gang, leader of the team that developed the technique. “By varying the length of the individual strands and attaching complementary pieces to the particles we want to join, and anchoring the whole process on an assembly surface, we can precisely control the construction of individual nanoclusters.”

In the current study, the team used this multi-step process to attach semiconductive quantum dots to gold nanoparticles. Metallic materials are known to affect the optical properties of quantum dots, either by enhancing or inhibiting photoluminescence, depending on a range of factors including the size and shape of the materials, the distance between them, and the wavelength of light used to induce photoexcitation.

The precision assembly technique allowed the scientists to control the size, shape, and distance factors to a high degree of precision and test the effect of wavelength in isolation. They specifically chose two wavelengths to test: one close to the so-called “plasmon resonance” of the gold nanoparticles — that is, a wavelength that induces a collective oscillation of the material’s conductive electrons, leading to strong absorption of light at that wavelength — and one outside this range.

“This ability to control the excitonic properties in plasmonic fluorescent quantum dots is essential to the development of devices such as solar cells, light emitting diodes, or optical circuits and might improve the sensitivity of quantum-dot based biosensing assays,” Cotlet said.

In addition to Mircea Cotlet and Oleg Gang from Brookhaven, Mathew Maye (now at Syracuse University) contributed to this work. The research was performed at the Center for Functional Nanomaterials at Brookhaven National Laboratory and was supported by the Office of Science of the U.S. Department of Energy.

The Center for Functional Nanomaterials at BNL is one of the five DOE Nanoscale Science Research Centers, premier national user facilities for interdisciplinary research at the nanoscale that are supported by the DOE Office of Science. Together the NSRCs comprise a suite of complementary facilities that provide researchers with state-of-the-art capabilities to fabricate, process, characterize and model nanoscale materials, and constitute the largest infrastructure investment of the National Nanotechnology Initiative. The NSRCs are located at DOE’s Argonne, Brookhaven, Lawrence Berkeley, Oak Ridge and Sandia and Los Alamos national laboratories.