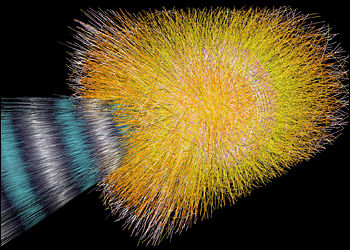 Simulation of a lead-ion collision in the ALICE detector. Image courtesy CERN.

“Over the last seven months, the intensity of the LHC’s proton beams has increased 200,000 times, and the scientists from the LHC experiments have quickly converted proton collisions into scientific results,” said Dennis Kovar, Associate Director of Science for High Energy Physics at the U.S. Department of Energy. “This is excellent progress for the brand-new accelerator and detectors, and bodes well for discoveries in the years to come.”

The LHC at the CERN particle physics laboratory in Geneva, Switzerland will spend the next month colliding lead ions — atoms of lead with all of their electrons stripped off during the acceleration process. The teams operating three of the four major LHC experiments — ALICE, ATLAS and CMS — will record and analyze data from these record-setting “heavy-ion” collisions, in which up to 10,000 particles will stream from each high-energy collision. This next phase of the LHC will provide the first full test of the capabilities of the ALICE experiment, which was designed specifically to record heavy-ion collision data. The lead-ion collisions will be used to investigate the quark gluon plasma, a state of matter that physicists believe existed millionths of a second after the Big Bang.

“The LHC’s lead-ion collisions may generate temperatures up to 500,000 times hotter than the center of the sun,” said Timothy Hallman, Associate Director of Science for Nuclear Physics at the U.S. Department of Energy. “The LHC experiments’ investigations into how the quark gluon plasma behaves at such temperatures will provide vital insight into why and how quarks and gluons cool from such high temperatures to bind together to form more complex particles and thus how our universe evolved into the form it has today.”

Following the lead-ion collision period, the LHC will shut down for about two months for yearly maintenance before resuming high-energy collisions with protons in 2011.

The LHC’s first high-energy proton-collision run was a scientific success. Scientists from the LHC experiments used the first few months’ worth of collision data to verify that their sophisticated new detectors worked as designed — no easy task for devices weighing thousands of tons and containing millions of individual sensors. Scientists measured known particles at higher energies than ever before, which confirmed that the detectors worked correctly while providing brand-new information to the physics community and laying the groundwork for longer-term searches for new particles like the Higgs boson. For example, the ATLAS and CMS collaboration measured the production of W bosons, elementary particles heavier than atoms of iron, and the LHCb collaboration measured the production of b-quarks, particles that may give us clues as to why nature prefers matter over anti-matter.

“The experiments are already providing an exciting glimpse of the new frontier”, said Sergio Bertolucci, CERN’s Director for Research and Computing. “This rapid delivery of the first physics measurements at 7 TeV is a direct result of the excellent performance of the detectors, the high efficiency of the data collection and the swift distribution of data via the Worldwide LHC Computing Grid for analysis at centres across the globe.”

Hard on the heels of these new measurements of known particles were searches for never-before-seen particles. While no new particles have yet been discovered, scientists from both the ATLAS and CMS experiments have placed new limits on the production of certain hypothetical particles, such as excited quarks and the supersymmetric partners of elementary particles called gluons.

“The eyes of the world might be on the hunt for the Higgs boson, but the scientists from the LHC experiments have shown that there is a wealth of physics research being done using the LHC’s proton collisions,” said National Science Foundation Physics Division Director Joseph Dehmer. “And while the accelerator might take a short break at the end of the year, thousands of LHC scientists will continue poring over this first run’s data in the hopes of confirming some theories, disproving others, and spotting the first evidence for a new particle.”

The LHC has also seen its first unexpected measurement, announced in September by the CMS collaboration. In collisions of protons in which more than 100 charged particles were produced, scientists from the CMS experiment saw indications that some of the particles were associated with each other at the time of their creation, despite traveling away from the collision with very different angles. This phenomenon had never before been observed in proton collisions. Effects with intriguing similarities have been seen in collisions of heavy ions, such as those recorded at Brookhaven National Laboratory’s Relativistic Heavy Ion Collider, which have been interpreted as being possibly due to the creation of strongly interacting, hot dense matter.

More than 1,700 scientists, engineers, students and technicians from 89 American universities, seven U.S. Department of Energy (DOE) national laboratories, and one supercomputing center helped design, build and operate the LHC accelerator and its four massive particle detectors. American participation is supported by the DOE’s Office of Science and the National Science Foundation (NSF). The DOE’s Brookhaven National Laboratory, Fermi National Accelerator Laboratory and Lawrence Berkeley National Laboratory are the host laboratories for the U.S. groups participating in the ATLAS, CMS and ALICE experiments, respectively.

Lead-ion collision photos, animations and video are available on the LHC website.

The full list of the 97 U.S. universities, national laboratories and computing centers participating in the Large Hadron Collider project is available on the LHC website.